It was never a matter of if, but when.

Science journalist Alex Berenson has been permanently suspended from Twitter, just one day after a viral series of tweets spotlighting an Israeli preprint study which showed that natural immunity from a prior COVID-19 infection is 13 times more effective than vaccines against the delta variant.

“The account you referenced has been permanently suspended for repeated violations of our COVID-19 misinformation rules,” a Twitter spokesperson told Fox News.

The last tweet he posted, meanwhile, accurately noted that the vaccine “doesn’t stop infection. Or transmission.”

“Don’t think of it as a vaccine,” he added. “Think of it – at best – as a therapeutic with a limited window of efficacy and terrible side effect profile that must be dosed IN ADVANCE OF ILLNESS.”

“And we want to mandate it? Insanity.”

“This was the tweet that did it. Entirely accurate. I can’t wait to hear what a jury will make of this,” wrote Berenson on his substack blog, Unreported Truths. 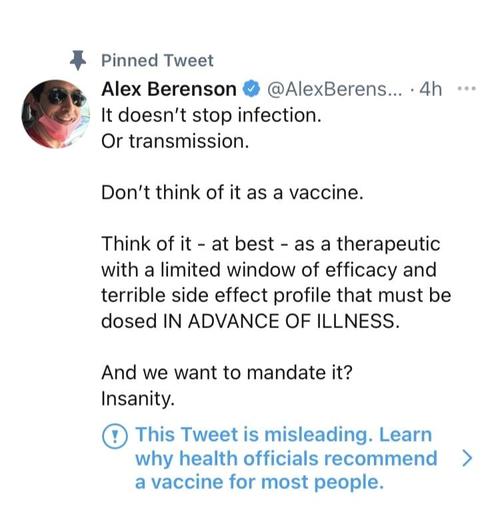 They have defamed me and denied me a very important platform. But with your help I’ll do my best to keep getting the truth out.

Adding his tweet activity from the Israeli study – revealing nearly three million impressions and over a quarter million people who interacted with the tweet. 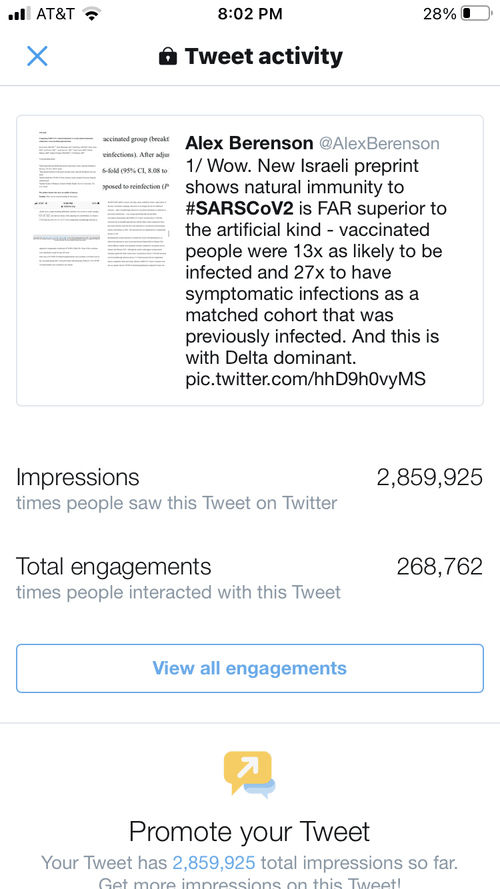 Berenson made headlines in July when Dr. Anthony Fauci appeared on CNN‘s “State of the Union,” calling Berenson’s CPAC comments that the vaccine effort is a ‘scam’ was ‘horrifying.’

“The government was hoping that they could sort of sucker 90% of the population into getting vaccinated,” Berenson said. “And it isn’t happening.”

Jake Tapper asks Dr. Anthony Fauci to react to the CPAC Texas crowd cheering that the government has been unable to reach its vaccine goals so far.

Fauci: "It’s horrifying… I just don’t get that. I mean, and I don’t think that anybody who is thinking clearly can get that." pic.twitter.com/4nY7CMor5i

Berenson’s full speech – where he slams big tech for controlling narratives and censoring divergent opinions, is (for now), below:

As Fox News notes, Berenson wrote in a December op-ed in the Wall Street Journal that the pandemic had ushered in a “new age of censorship and suppression.”

“Information has never been more plentiful or easier to distribute. Yet we are sliding into a new age of censorship and suppression, encouraged by technology giants and traditional media companies. As someone who’s been falsely characterized as a coronavirus ‘denier,’” he wrote, adding “I have seen this crisis firsthand.”

When he wrote the Op-Ed, Berenson had been in a recent battle with Amazon over his self-published books.

“Since June, Amazon has twice tried to suppress self-published booklets I have written about Covid-19 and the response to it,” he wrote. “These booklets don’t contain conspiracy theories. Like the scientists who wrote the Great Barrington Declaration, I simply believe many measures to control the coronavirus have been damaging, counterproductive and unsupported by science.”

The only opening – the only one – for Berenson is that Twitter made a statement about banning him. Still a high bar, actual malice hard to prove.

If the company had kept its mouth shut (which it should have), the ban itself isn't defamatory & this would be a sure loser.

For info, the lawyer who literally wrote the book on the most important law governing a prospective Berenson suit thinks it's a nonstarterhttps://t.co/TWem0JhHCR

Berenson was a New York Times journalist from 1999 to 2010 before becoming a full time author of both fiction and nonfiction.