Twitter has suspended the account of a Colorado biotech company which is working with Cedars-Sinai to test and develop a potential coronavirus treatment using UV light inserted into the lungs – the same week as Homeland Security’s head of Science and Technology, Bill Bryan, suggested that UV light could have a significant affect on viruses such as COVID-19.

UPDATE: @Twitter just suspended the account of the publicly traded biotech company AYTU BioScience that created a novel COVID-19 treatment approach utilizing UV light in the lungs that @realDonaldTrump was talking about.

The suspension of Aytu BioScience’s account comes shortly after YouTube removed a video demonstrating the technology (which can be seen below on Vimeo).

“We are proud to have teamed up with @MarkPimentelMD and his team at @CedarsSinai” -Josh Disbrow AYTU Bioscience CEO https://t.co/F8ZIGuhjeE pic.twitter.com/vwykYTZ3Ne 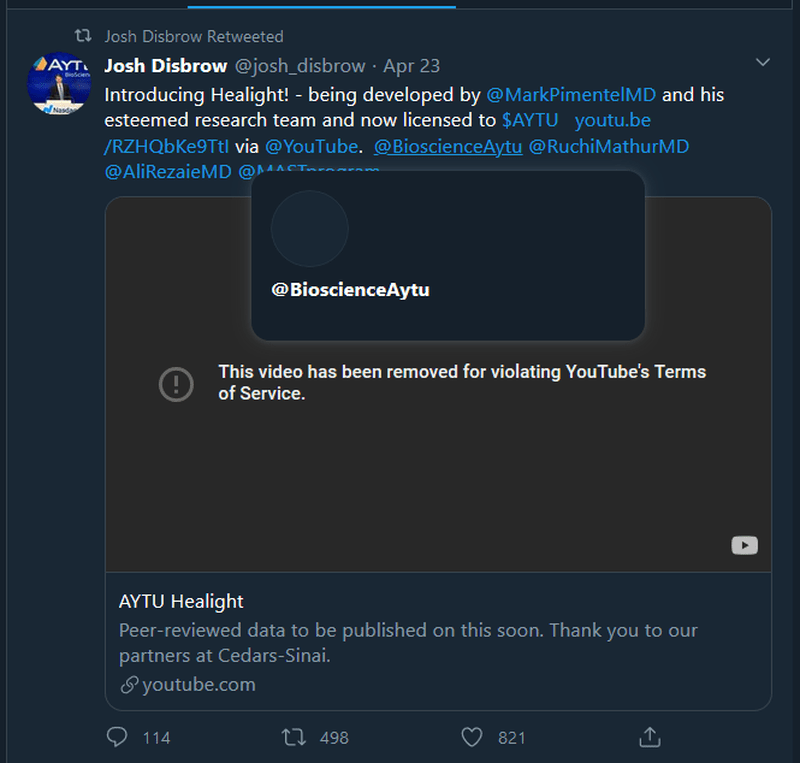 Aytu’s “Healight” is a medical device which administers intermittent ultraviolet (UV-A) light inside a patient’s trachea, which has the “potential to positively impact outcomes for critically ill patients infected with coronavirus and severe respiratory infections,” according to a corporate press release.

The company is working with the Medically Associated Science and Technology (MAST) team at Cedars-Sinai medical center, and are seeking expedited FDA approval for near-term use of the technology.

Twitter and YouTube’s ban of Aytu couldn’t have anything to do with this, could it?