According to O’Keefe (via Gab), the accounts were suspended for “reporting on Facebook VP Guy Rosen and his statements that Facebook “freezes” comments in places that algorithms think there “may be” hate speech.” 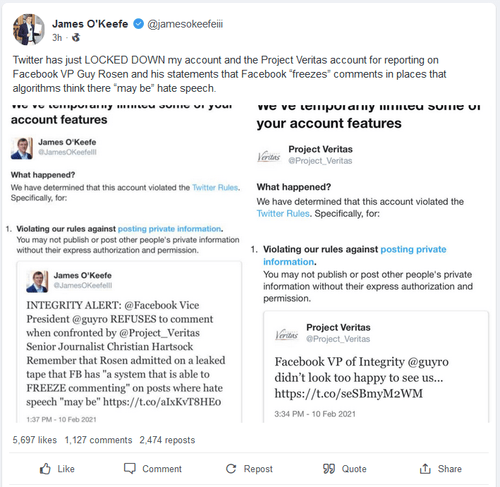 In the video, Veritas journalist Christian Hartsock confronted Rosen outside of his house and asked him to comment on leaked footage in which Rosen says that Facebook has “a system that is able to freeze commenting” where “there may be a thread that has hate speech or violence, sort of in the comments.” Rosen’s house number is visible in the clip, though not his full address.

The suspension comes after Twitter CFO Ned Segal on said on Wednesday that Donald Trump will never be allowed to have a Twitter account following the banning of his @realdonaldtrump handle. The company also permanently suspended the account of The Gateway Pundit founder Jim Hoft, which served as the outlet’s primary Twitter presence.

One can’t help but wonder if Twitter will ban CNN after showing up to a Trump supporter’s house and badgering her over alleged Russian information spread over her Facebook page? Actually, one doesn’t have to wonder.

A Florida woman who ran a Trump supporters page that unwittingly promoted a Russian-coordinated event on Facebook says she doesn’t believe that she was influenced by Kremlin-linked trolls https://t.co/DmgDRFRwyn pic.twitter.com/OAz5julCyA

Meanwhile, Twitter also has yet to suspend the New York Times’ Nikole Hannah-Jones for doxing a Free Beacon reporter on Twitter.