Elon Musk said in an amended 13D filing that he believes Twitter is breaching their merger agreement by not providing information about spam and fake accounts.

Musk said he believes Twitter is “actively resisting and thwarting his information rights” by refusing to disclose the information.

Recall, we had previously highlighted Musk’s ongoing battle with Twitter where, in its last stage in late May, Musk seemed to suggest his buyout offer may be compromised as a result of the number of bots on the platform.

The controversy escalated May after Musk tweeted a Reuters article in which Twitter estimated that fake accounts comprise less than 5% of users, to which Musk said: 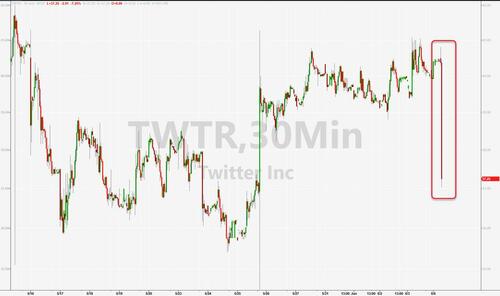 Read the fuller letter below: (emphasis ours)

We are in receipt of correspondence sent on Twitter’s behalf dated June 1, 2022, responding to Mr. Musk’s request for the data and information described in my letters dated May 25, 2022 and May 31, 2022.

Mr. Musk does not agree with the characterizations in Twitter’s June 1 letter. Twitter has, in fact, refused to provide the information that Mr. Musk has repeatedly requested since May 9, 2022 to facilitate his evaluation of spam and fake accounts on the company’s platform. Twitter’s latest offer to simply provide additional details regarding the company’s own testing methodologies, whether through written materials or verbal explanations, is tantamount to refusing Mr. Musk’s data requests. Twitter’s effort to characterize it otherwise is merely an attempt to obfuscate and confuse the issue. Mr. Musk has made it clear that he does not believe the company’s lax testing methodologies are adequate so he must conduct his own analysis. The data he has requested is necessary to do so.

As Twitter’s prospective owner, Mr. Musk is clearly entitled to the requested data to enable him to prepare for transitioning Twitter’s business to his ownership and to facilitate his transaction financing. To do both, he must have a complete and accurate understanding of the very core of Twitter’s business model—its active user base. In any event, Mr. Musk is not required to explain his rationale for requesting the data, nor submit to the new conditions the company has attempted to impose on his contractual right to the requested data. At this point, Mr. Musk believes Twitter is transparently refusing to comply with its obligations under the merger agreement, which is causing further suspicion that the company is withholding the requested data due to concern for what Mr. Musk’s own analysis of that data will uncover.

If Twitter is confident in its publicized spam estimates, Mr. Musk does not understand the company’s reluctance to allow Mr. Musk to independently evaluate those estimates. As noted in our previous correspondence, Mr. Musk will of course comply with the restrictions provided under Section 6.4, including by ensuring that anyone reviewing the data is bound by a non-disclosure agreement, and Mr. Musk will not retain or otherwise use any competitively sensitive information if the transaction is not consummated.

Juts more negotiation? What is the next step? Twitter sues Musk, in a Washington DC court, and judge rules ‘fair value’ for Twitter is $500 per share?