Much attention lately has been focused on a series of Chinese hypersonic weapons tests. Let’s now shift our attention to the US and Russia, where the Pentagon has reactivated a nuclear unit, based in Mainz-Kastel, western Germany, that will soon be able to launch 4,000 mph hypersonic weapons aimed at Moscow, according to The Sun.

For the first time in decades, the 56th Artillery Command is armed with “Dark Eagle” long-range hypersonic missiles that can strike Moscow in 21 minutes and 30 seconds. The last time the command was fully operational was in 1991, right before the Soviet Union collapsed.

“From a blank piece of paper in March 2019, we, along with our industry partners and joint services, delivered this hardware in just over two years. Now, Soldiers can begin training,” Lt. Gen. L. Neil Thurgood said in a statement. 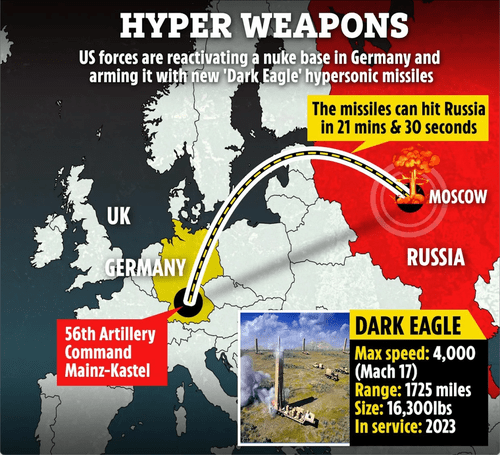 The reactivation reveals increasing concerns among Pentagon officials that Russia has outgunned the US and NATO in Europe with advanced hypersonic weapons. There are mounting issues in the region where Russia has positioned 100k troops on the Ukraine border, and tensions between Russian-backed Belarus and Poland have resulted in waves of migrants attempting to storm Europe.

The commanding general of the artillery unit, General Stephen Maranian, said the reactivation would “provide the US Army Europe and Africa with significant capabilities in multi-domain operations.”

Separate from Dark Eagle, the 56th Artillery Command will also receive an array of weapons, including the ground-launched version of the Tomahawk cruise missile.

Hypersonic missiles could be a game-changer for NATO because the world’s most advanced missile defense shields have trouble shooting down these weapons due to high speeds and an unpredictable flight path.

China and Russia are both ahead in the hypersonic race when compared to the US. The FT released a series of reports last month that left US intelligence and military officials stunned by Chinese hypersonic tests.

Washington’s hypersonic missile plan for Germany suggests an inevitable Cold War is ahead, one where the development of hypersonic weapons and fifth-generation fighter jets will be a competition among global superpowers.