Update (1730ET): Having already seen DHS refute the FBI’s fearmongering over “online chatter”, noting that there were in fact “no credible threats,” the top Federal prosecutor has just been forced to refute what appears be lies about strong evidence about assassination squads in The Capitol by Arizona state prosecutors.

Having made every mainstream media’s news-cycle today, and done a great job of ratcheting up the fear to ’11’: 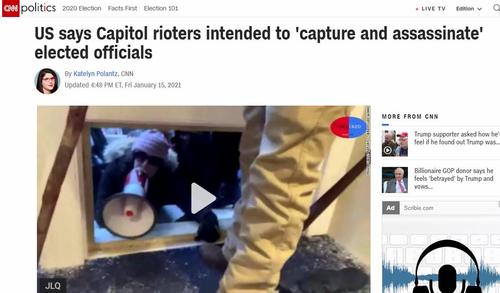 Reuters reports that the top federal prosecutor in Washington, D.C. said on Friday there is no “direct evidence” to suggest that rioters who stormed the U.S. Capitol had formed “kill capture teams.”

The comments by Acting U.S. Attorney Michael Sherwin appeared to be an effort to walk back claims federal prosecutors in Arizona had made in a court filing late on Thursday, in which they alleged there was evidence that rioters intended “to capture and assassinate elected officials.”

Late on Thursday, federal prosecutors had made sweeping claims about the ongoing investigation in a filing

“Strong evidence, including Chansley’s own words and actions at the Capitol, supports that the intent of the Capitol rioters was to capture and assassinate elected officials in the United States government,” the memo said. 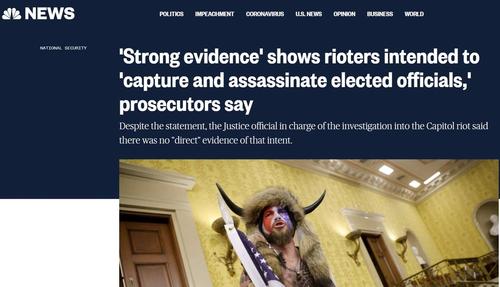 Except we now know… there was no evidence, let alone ‘strong evidence’!

We look forward to Bloomberg, NBC, and CNN all retracting this story and putting the American public straight.

The excuse for this egregious lie being broadcast worldwide? Simple – miscommunication!

Sherwin said that his office is leading the prosecution effort, but as local offices help to run down suspects in their districts, there may have been a “disconnect” on the evidence obtained so far in the cases.

Between The FBI ‘lies’ and these local prosecutors’ ‘lies’, one might just get the impression that fear is being ratcheted up for political gain and to enable Patriot Act II’s crackdown on “domestic terrorism” to more easily slide between the cheeks of an anxious American public desperate to be saved from this terror – to hell with liberty, just do something!

“There’s no specific credible threats at this point in time. There’s just this raised level of tension. And so we’re raising our security level. And we’re doing it across the country,” Ken Cuccinelli, acting deputy secretary of the Department of Homeland Security, said on CNN’s “New Day.”

FBI Director Christopher Wray told Vice President Mike Pence in a briefing on Thursday that the bureau was seeing an “extensive amount of concerning online chatter” of potential threats before and during the inauguration.

“We’re concerned about the potential for violence at multiple protests and rallies planned here in D.C. and in state capitols around the country in the days that come that could bring armed individuals within close proximity to government facilities and officials,” Wray said.

Cuccinelli, who was at the briefing, said he agreed “there is a good deal of online chatter” regarding both Washington and state capitols, though no specific state capitols have been mentioned or identified.

At this point in time, officials are not raising the terrorism threat level, but are taking a number of actions to try to be ready if a threat does manifest.

“We’ve prepared our own civilian law enforcement around the country to be ready to assist state and local allies to the extent they call on us to do so. We are prepositioning people on alert statuses around the country so that we can respond more quickly,” said Cuccinelli, a former Virginia attorney general.

During a separate appearance on Fox News’ “Mornings with Maria,” Cuccinelli said officials expect “a safe, smooth inauguration, and nothing has happened to change that,” including the Jan. 6 breach of the U.S. Capitol.

“While it has raised attention to the security around the inauguration, this planning has been going on across the U.S. Government with state and local partners since last May. It is a very secure event. We are prepared for orders of magnitude or sorts of problems that happened on January 6th, and that was before January 6th,” he said. “So America can be very confident this is going to be a safe, smooth inauguration and transition of power.”