As we noted a few weeks ago, America has smashed President Biden’s revised target of 200M COVID-19 jabs in arms by the end of his first 100 days in office while moving up his target for having the entire adult population vaccinated.  According to data from the CDC, the US has easily surpassed 200M jabs-in-arms. But as the COVID-19 cases climb, the world is beginning to rethink expectations surrounding herd immunity, while also questioning the efficacy of vaccines as some patients are reinfected by “mutant” COVID-19 strains, or – even more rarely – fall victim to strange side-effects (like cerebral blood clots).

But while Biden’s Dr. Fauci-led White House advisory team refuses to acknowledge this reality, Dr. Scott Gottlieb pointed out a few weeks back that he expected demand for vaccines to dampen as more young people refuse shots on the belief that they aren’t susceptible to severe infection. Already, unused doses are piling up in certain US states.

As the map below shows, vaccination rates are extremely high along the coasts, while the southeast, a bastion of vaccine skepticism, has seen more resistance. 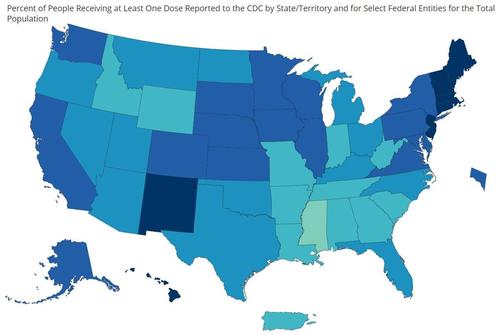 The upshot, is that the projections for 100% herd immunity shared this spring by Sell Side analysts at banks like Morgan Stanley now appear almost absurdly over-optimistic. 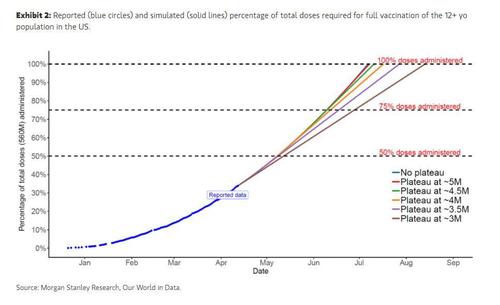 Despite the fact that millions of Americans have yet to be vaccinated, mass vaccination centers are shutting down across the US (with the exception of California and the northeast). Here’s breakdown of recent vaccination site closures, courtesy of Forbes:

* * *
The 7-day average of vaccinations in the US remains strong at 3.02M, according to the CDC. That average has been steadily declining in recent days after peaking at 3.3M last week. The J&J vaccine is still halted by federal authorities.

To be sure, even as some vaccination centers are shuttering, others are opening. Notably, New Yorkers will soon be able to get vaccinated at the American Museum of Natural History.

So what needs to be done? Well, as we detailed previously, it’s not “ignorant, white supremacist, Republicans” that are refusing the shot, it’s Gen Z and Millennials… 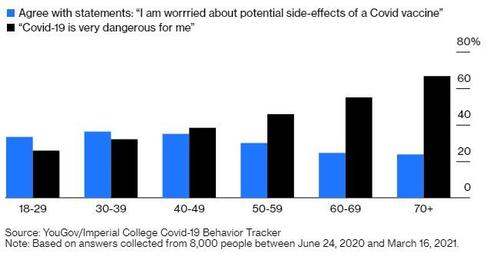 Globally, just under 950 million shots have been given worldwide, though in more than 130 developing nations, not a single jab has been delivered.