A leaked draft of a US Supreme Court decision reveals that the majority of the court has decided to overturn Roe v. Wade by a vote of 5-4, according to Politico, which calls it a “full-throated, unflinching repudiation of the 1973 decision which guaranteed federal constitutional protections of abortion rights and a subsequent 1992 decision – Planned Parenthood v. Casey – that largely maintained the right.”

“Roe was egregiously wrong from the start,” wrote Justice Samuel Alito in the draft which was circulated inside the court before someone leaked it to the news outlet. “We hold that Roe and Casey must be overruled.”

“No draft decision in the modern history of the court has been disclosed publicly while a case was still pending. The unprecedented revelation is bound to intensify the debate over what was already the most controversial case on the docket this term.” https://t.co/2os0uJWyUr

Politico highlighted these 10 passages from the draft opinion:

Sorry one last thing for those wondering about Court procedure: After oral argument the Justices take a tentative vote. This would have happened in December. The senior most justice in the majority gets to assign the opinion. That might have been Roberts, but doubtful since…

So there is the possibility an opinion can flip after oral argument and the tentative vote, so it's theoretically powerful the Alito opinion won't be the vote of the Court. But it would require a Justice BESIDES Chief Justice Roberts to flip.

The magnitude of this report is so serious that Politico included this editor’s note vouching for the authenticity of the draft decision. 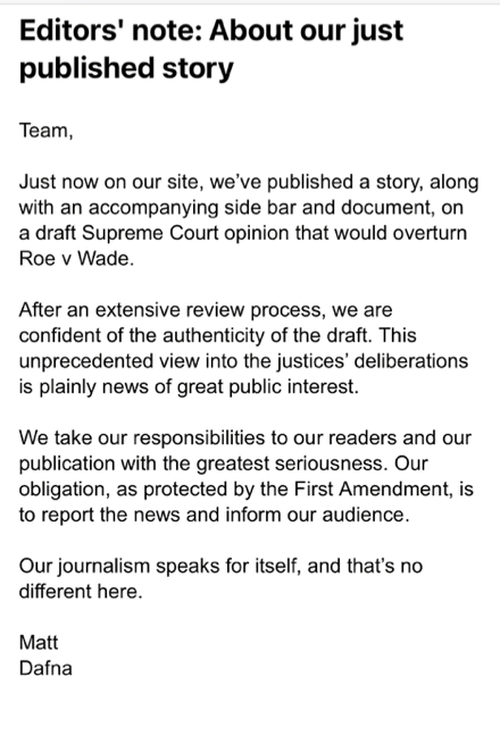 The leak has completely wiped the headlines and Twitter is exploding with hot takes.

Leaking a draft SCOTUS ruling is worse than January 6th. The Court was the one institution where conservatives and liberals lived in peace and trust. You disagreed but the trust was sacred. This completely destroys the Court’s inner workings. Totally in shock right now.

The fact that some are praising this leak shows how utterly craven we have become in our politics. There appears no ethical rule or institutional interest that can withstand this age of rage.

FWIW, there’s not much the GOP wants less than Roe to actually be overturned.

If the Politico scoop is correct, the GOP is now the dog who caught the car.

Roe was always a shiny thing to campaign on (much like repealing Obamacare) but never something they actually wanted to do.

This is why they leaked:
"Justices can and sometimes do change their votes as draft opinions circulate and major decisions can be subject to multiple drafts and vote-trading…The court’s holding will not be final until it is published, likely in the next two months." (Politico) https://t.co/9k0JfLfYZd

Probably the greatest violation of unwritten "norms" in the history of the Supreme Court.

And I absolutely guarantee you the leaker spent years railing against President Trump's undermining of norms. https://t.co/XSa9LaGb66

Interference in a Supreme Court decision is a blow to democracy – like, say, stopping an electoral vote