As shortages of COVID-19 vaccine supplies force more countries stretch the time between the first and second vaccine doses to try and vaccinate more people, the latest data out of a UK study of vaccination rates has stumbled on a disturbing finding: the study found that people who have had one dose are still at risk from mutated strains of the virus.

The study, published Friday afternoon in London by Imperial College London and published in the journal Science, examined the immune responses of health-care workers following their first dose of the Pfizer jab.

It found that people who had previously been infected saw significantly enhanced protection against mutant strains of the virus typically referred to as “variants”. Those who only received the jab, but weren’t previously infected, showed an immune response that was “less strong after a first dose, potentially leaving them at risk from variants.” The findings show that those who have received the Pfizer jab aren’t “fully protected” from COVID-19 variants.

Professor Rosemary Boyton, Professor of Immunology and Respiratory Medicine at Imperial College London, who led the research, said: “Our findings show that people who have had their first dose of vaccine, and who have not previously been infected with SARS-CoV-2, are not fully protected against the circulating variants of concern. This study highlights the importance of getting second doses of the vaccine rolled out to protect the population.”

Imperial College published the results in full on its website.

Meanwhile, another study released Friday came to a similar conclusion, showing that some patients who have received their first dose still wind up in the hospital with COVID symptoms.

The news appeared to weigh on US stocks, which tumbled to their lows of the session shortly after the news broke. Analysts claimed the study is a problem for the global growth outlook – which has already taken a hit thanks to to the latest data out of China – as countries like Canada aim to stagger doses by months to try and make the most out of limited supplies.

According to the latest data released on Friday, 65% of British adults have already received at least one dose, while 3,736,654 people were vaccinated in the past 7 days. More than 25% of adults in the country, meanwhile, have received both doses. 48,748,962 doses of COVID-19 vaccine have now been administered in the UK, while the US just announced that 100M Americans have now been fully vaccinated. 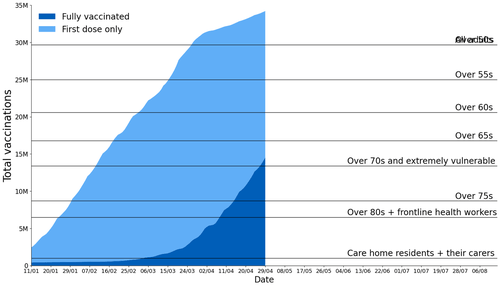 But the latest study data available suggests that patients who have received only one shot are still vulnerable. Researchers say the findings are reassuring because vaccines are never 100% perfect and failures are expected. But others have said that the most vulnerable patients may be letting their guard down too soon after one vaccine.

The study analyzed a quarter of all hospital patients in England, Scotland and Wales between early December and early April, and is one of the first to look at the impact of vaccinations on the numbers of people subsequently admitted to hospital.

“It’s reassuring that the numbers admitted are very, very small – and mostly in those at risk of severe disease,” he said.

Meanwhile, Dr. Annemarie Docherty, a study co-author and honorary consultant in critical care, warned that this is just the latest sign that patients are assuming they’re “safe” immediately after being vaccinated, rather than weeks later.

“It’s entirely possible that elderly people will catch coronavirus again and may die,” she said.

In the study, 526 people who tested positive for coronavirus were admitted to hospital from 21 days after one vaccine dose, and 113 died – out of more than 3,500 hospitalised patients in the study. The data comes from the ISARIC/CO-CIN study, which has been presented to the government’s scientific advisers, Sage, but not yet reviewed by other experts. More complete NHS hospital data is set to be released in due course.