Update (1250ET): Adding to the angst and uncertainty that followed the optimistic FT report earlier that Ukraine and Russia are working on a “15-point” peace plan which sent risk assets soaring just after 10am, moments ago Ukraine president spokesman Mihailo Podolyak tweeted that “the FT published a draft, which represents the requesting position of the Russian side. Nothing more.  The side has its own positions. The only thing we confirm at this stage is a ceasefire, withdrawal of Russian troops and security guarantees from a number of countries”

Briefly. FT published a draft, which represents the requesting position of the Russian side. Nothing more. The ?? side has its own positions. The only thing we confirm at this stage is a ceasefire, withdrawal of Russian troops and security guarantees from a number of countries

In short, far less progress than markets priced in… and down we go. 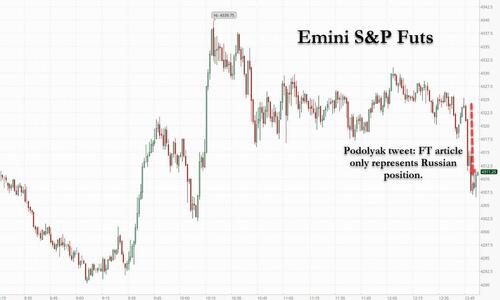 Update(10:49ET): And just like that stocks puke after just minutes following FT revealing that a “15-point peace plan including a ceasefire” was on the table amid Ukraine-Russia ceasefire talks, Kiev is said to be rejecting the proposal… 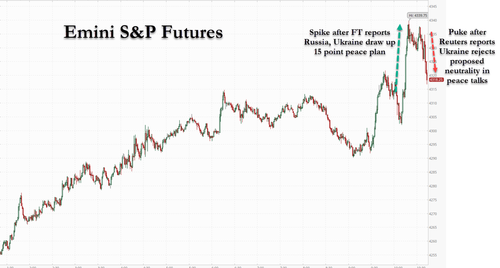 Here are some of details as they come in:

Ukraine denied Russian claims that Kyiv was open to adopting a model of neutrality comparable to Sweden in a peace deal. Russian negotiators said Ukraine offered to become a demilitarised state but Kyiv denied this and said Ukraine needed “legally verified security guarantees” to keep it safe and would not accept any other model.

This also coming off a weekend where both sides seemed to signal a general optimism of how talks were going… but with this latest Wednesday false start on a concrete proposal, all we can say is that at least they are still talking.

Meanwhile, according to Russian news agency RIA, when Kremlin spokesman Dmitry Peskov was asked about the FT report, he responded that it is too early to disclose any set of potential agreements on resolving the Ukraine conflict.

In short: nothing but chaos.

Update(10:24ET):  The news out of Ukraine is coming extra fast and furious this morning, and barely minutes after Zelensky ended his videoconference before the US Congress in which he demanded for a no fly zone over Ukraine, the FT reports that Ukraine and Russia “have made significant progress on a tentative 15-point peace plan including a ceasefire and Russian withdrawal if Kyiv declares neutrality and accepts limits on its armed forces.”

According to the report, the proposed deal which was said to be under discussion since Monday would center on Kiev renouncing any plans to joint the NATO military alliance while further vowing not to allow any foreign military bases or weaponry as part of any “protection” deal from NATO allies such as the US, UK or Turkey, according to FT’s sources.

“The nature of western guarantees for Ukrainian security — and their acceptability to Moscow — could yet prove to be a big obstacle to any deal, as could the status of Ukrainian territories seized by Russia and its proxies in 2014. A 1994 agreement underpinning Ukrainian security failed to prevent Russian aggression against its neighbor.”

“Although Moscow and Kyiv both said on Wednesday that they had made progress on the terms of a deal, Ukrainian officials remain sceptikal Russian President Vladimir Putin is fully committed to peace and worry that Moscow could be buying time to regroup its forces and resume its offensive,” the FT report adds. And another key section from the fresh reporting:

Mykhailo Podolyak, a senior adviser to Ukrainian President Volodymyr Zelensky, told the Financial Times that any deal would involve “the troops of the Russian Federation in any case leaving the territory of Ukraine” captured since the invasion began on February 24 — namely southern regions along the Azov and Black Seas, as well as territory to the east and north of Kyiv. 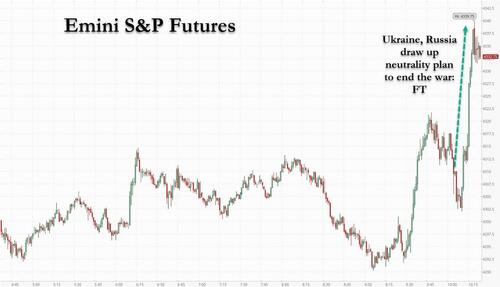 “The talks are hard and slow-going. Of course, we would like them to proceed much faster. It is Russia’s sincere wish. We want to achieve peace as soon as possible,” Russia’s chief delegate, presidential aide Vladimir Medinsky said Wednesday. He cited “some progress” made in the talks as the invasion grinds on.

At the same time, the Kremlin cited a potential opening toward peace in the ongoing ceasefire negotiations, following President Zelensky’s insistence repeated Tuesday that “Ukraine must recognize it will not join NATO.”

Apparently seizing upon this as a key point of compromise – which has from the start been foremost among Russia’s central security demands to NATO, Kremlin spokesman Dmitry Peskov said Wednesday this proposal for Ukraine to become a neutral country “could be viewed as a certain kind of compromise,” as quoted in Bloomberg.

Bloomberg noted that “Peskov declined to provide details beyond confirming that the idea of Swedish or Austrian-style neutrality is under discussion in the talks now underway with Ukraine.”

This appears to have gained traction at the negotiating table, given that Bloomberg is reporting simultaneously the words of Ukrainian presidential adviser Mykhailo Podolyak, who is stressing that any future model of neutrality must safeguard Ukrainian sovereignty with firm security guarantees.

“No other models or variants” and with “absolute security guarantees. Actionable, not protocol or Budapest-style,” he said. “This means that the signatories do not stand aside in case of attack against Ukraine as they do now.”

He added, as quoted in Bloomberg, “Secondly, Ukraine no longer wants to be dependent on bureaucracy that may allow or not allow” closing the sky from missiles. “We need direct and hard guarantees that the sky will be closed.”

This just ahead of Zelensky’s planned address before both chambers of US Congress on Wednesday, which is set for 9am eastern time.

Despite this clear “opening” at the negotiations table based on neutrality, the fact that Zelensky has been pushing a no-fly zone hard in front of an international audience – and on Tuesday doing so in a virtual speech to Canadian parliament – could greatly complicated things with Moscow in terms of finding a possible diplomatic off-ramp.

The Canadian Parliament gives Zelensky a long standing ovation after his address, which repeated calls to support a no-fly zone. pic.twitter.com/gcKhr75dEj