The Secretary-General of the United Nations, Antonio Guterres, has called on nations to institute a wealth tax on those who have profited during the COVID-19 pandemic, in order to ‘help reduce global inequality,’ according to Bloomberg.

On Monday, Guterres told a UN economic and social forum that there has been a $5 trillion surge in the wealth of the world’s richest individuals over the past year, while those at the bottom have been made ‘increasingly vulnerable.’

“I urge governments to consider a solidarity or wealth tax on those who have profited during the pandemic, to reduce extreme inequalities,” he said, adding: “We need a new social contract, based on solidarity and investments in education, decent and green jobs, social protection, and health systems. This is the foundation for sustainable and inclusive development.”

With the Covid-19 fallout causing government debt to swell, and hurting poorer people most, wealth taxes are being debated from California to the U.K. as a tool both to pay down debt and address inequality. U.S. Senator Elizabeth Warren, Nobel laureate Joseph Stiglitz and economist Thomas Piketty are among proponents.

In the U.S., Warren, along with Representatives Pramila Jayapal and Brendan Boyle, have proposed a 2% annual tax on households and trusts valued at between $50 million and $1 billion, though the measure is unlikely to garner the support needed to pass, particularly in the evenly divided Senate. –Bloomberg

As we noted on Sunday, the 2,365 billionaires living on planet earth have seen their wealth increase by a collective $4 trillion – a 54% increase over the span of a year. Put another way, total wealth held by billionaires ballooned to $12.39 trillion, up from $8.04 trillion.

270 billionaires were added to the Institute’s billionaires list – ie the tres commas club – during the past year, while 91 names were removed for  – for a net increase of 179 (we wish the 91 individuals removed from the list the best of luck on “re-billionizing”.

Of the nearly 2.5K billionaires tracked by the Institute, 13 billionaires saw their wealth soar by more than 500%. The Institute grouped these lucky individuals in its “500% Club”. It noted that all of them had investments and connections to companies that benefited the most (in terms of market capitalization) from the pandemic.

Last week, US Treasury Secretary Janet Yellen made the case for a minimum corporate tax rate across global economies which would help pay for President Joe Biden’s next stimulus, while mitigating what she described as an international “race to the bottom” of countries offering attractive corporate tax rates to lure corporations with lower taxes.

Warning against a wealth tax is Nobel Prize-winning economist, Angus Deaton, who says that it’s a terrible way to pay off pandemic debts, and would likely become permanent if introduced.

What’s more, levying taxes on high-earners would be “very difficult to implement,” and would give wealthy people “huge incentives to avoid it — and they will,” said the Princeton University professor who is currently studying inequality in the UK.

The remarks brush against a growing number of politicians calling for the richest to shoulder more of the burden of the record borrowing taken on by governments to prop up economies hit by Covid-19. The International Monetary Fund this week said a temporary levy would help to alleviate social inequalities that have deepened in the pandemic.

The author of the book “Deaths of Despair,” which he co-wrote with his wife fellow economist Anne Case, said in an interview that a one-time wealth tax is “likely to turn into a permanent,” just as the income tax did. Britain introduced taxes on pay to fund the Napoleonic War, and now it’s one of the most prominent sources of revenue. –Bloomberg

Deaton also recommended against cutting social services, warning that “the doom sayers, the deficit hawks, the austerity mavens” have created a disaster by cutting funds meant for health and education. 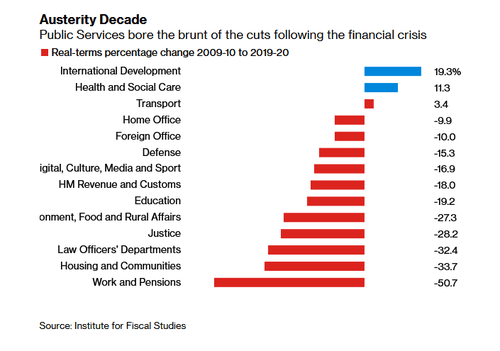 According to Deaton, the pandemic exacerbated negative economic trends which were already unfolding in the US and UK.

“In economic booms, it always picks up, but it never picks up as far as the previous peak,” Deaton said. “You get this endless downward ratchet. That’s something we really need to turn around, and it’s going to be hard.”