Dear Kristian Andersen @K_G_Andersen what exactly in our question prompted you to block us? https://t.co/dKM5aTmHzc pic.twitter.com/cs9OEn2Oas

A California virologist who told Anthony Fauci that COVID-19 looks ‘potentially engineered’ and ‘inconsistent with expectations from evolutionary theory’ – only to later reverse course and publish a ‘natural origin’ paper 8 weeks later (before receiving a multi million-dollar NIH grant) has deleted more than 5,000 tweets.

Kristian G. Anderson who runs the Andersen Lab in La Jolla, CA, wrote in a Feb. 1 email to Fauci “The unusual features of the virus make up a really small part of the genome, less than 0.1 percent, so one has to look really closely at all the sequences to see that some of the features (potentially) look engineered,” adding that he and his team found “the genome inconsistent with expectations from evolutionary theory.” 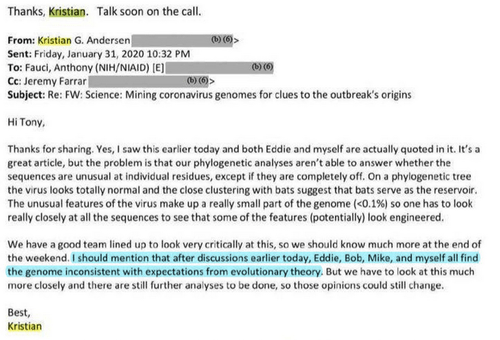 Anderson was responding to an article sent to him by Fauci exploring the origins of the virus. The next day, Fauci sent an urgent email to his deputy, Hugh Auchincloss, with the subject “IMPORTANT,” writing “Hugh, it is essential that we speak this a.m. Keep your cell phone on. … Read this paper as well as the email that I will forward. You will have tasks today that must be done.”

So right after one of Fauci’s trusted scientific advisers suggests COVID-19 could be man-made (while Fauci and associates publicly dismissed the possibility as a conspiracy theory), he shot a research paper concerning gain of function research – which Fauci was funding at the Wuhan Institute of Virology – to his deputy.

And now Anderson has deleted more than half of his tweets.

Anderson claims that his old tweets are ‘auto deleted’ – which would suggest a rolling, automated process – not the sudden disappearance of over 5,000 tweets preceding March 7, 2021.

This is a lie, because all tweets preceding March 7th, 2021 are deleted. This isn't some tool to auto-delete tweets after n time elapses… pic.twitter.com/JMS9PcFLiw

The deleted tweets come as internet sleuths begin to unravel Anderson’s involvement with Fauci and the NIH.

5 months after that, he gets $1.88 million in CREID funding, along with Daszak who gets $1.54 million more.https://t.co/PFPIMxZd7o pic.twitter.com/7JmapgRNTm

Supes weird that Kristian deleted his anti-lab-leak reply here after he saw my thread above. ? ? ? ? pic.twitter.com/zdMA3pRF03

Yeah, like of a sudden 5000 of your tweets go *poof* because they were auto-deletes? Wouldn't *auto*-deletes be deleted on a rolling bases? Or did you just change 5000 of your old tweets to be auto-deleted today?

Maybe you should auto-delete your Proximal Origins paper? ? pic.twitter.com/YvPIy37ylI

Maybe Kristian was advised by his lawyer to do this? Given the “pending investigation” redactions in the Fauci emails. ? https://t.co/bWKVb7TdBT

Meanwhile, Fauci has denied funding gain of function research in Wuhan, yet…

Subcontract awards from the NIAID -> Wuhan Institute of Virology from 2014 – 2019. pic.twitter.com/fxi23krqYg