“Weekend at Biden’s?”: Handlers Shut Down Yet Another Q&A After Public Appearance

For the third time in as many days (the previous two detailed here), President Biden’s handlers abruptly panicked at the prospect of him answering a question from the press.

Today’s debacle takes place in a DC hardware store as double-mask-wearing Biden stares blankly at the store owner during his polite introduction, then becomes distracted by people on an upper level of the store.

As the owner tries to address Biden again, Biden’s handlers suddenly become agitated and one is repeatedly heard saying, “come on press, let’s go, we’re gonna move out.” “Let’s go you guys, come on let’s go,” she repeats herself as one of the reporters tries to ask Biden about “the crisis at the border.”

Biden’s handlers aggressively prevent the press from asking POTUS any questions after his brief remarks at a D.C. hardware store pic.twitter.com/kTXFIe9ERM

What are the handlers so afraid of?

Biden’s gaffes – or put more gently ‘senior moments’ are mounting and the world is starting to notice.

It has been 48 days since President biden took office and he has yet to hold a formal press conference, and as Sara Carter reports, even the most liberal White House partisan reporters are growing restless.

“Last month would have been better, and this week would be better than next,” the WaPo editorial board wrote on Sunday.

“Avoiding news conferences must not become a regular habit for Mr. Biden,” the editorial board warned. “He is the president, and Americans have every right to expect that he will regularly submit himself to substantial questioning.”

Each of Biden’s 15 most recent predecessors – including former President Donald Trump – held a full news conference within their first 33 days in office.

.@Kevinliptakcnn notes that an analysis of the past 100 years shows President Biden’s 15 most recent predecessors all held a formal solo press conference within 33 days of taking office. Biden has not and it’s day 42.

Biden’s exchange of questions from reporters at the end of an event are no substitute for a formal press conference, WaPo media critic Erik Wemple said.

“These often perfunctory exchanges are no substitute for formal, solo news conferences at which reporters can ask follow-up questions,” Wemple said.

“Answers are supposed to be more than a couple of words long, and the president’s thoughts on a wide range of issues can be mined.”

We couldn’t help but think of this… 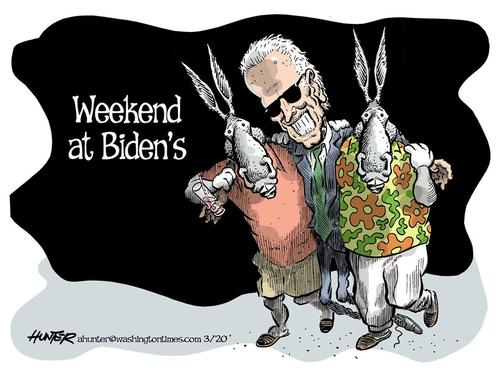 If it wasn’t so sad, it would be funny!

According to Rasmussen, Biden’s unwillingness to host a press conference has helped fuel concerns about his fitness for office, with many believing that he is hiding from the press.