WHO Mysteriously Deletes Tweet About Reinfection as ‘Immunity Passports’ Being Debated

The World Health Organization (WHO) on Sunday deleted an alarming tweet for unknown reasons suggesting COVID-19 infected persons could catch the disease a second time.

The tweet was live long enough to be picked up in the media — some of which reported the information as “misleading” — before its quiet deletion later in the day.

The tweet garnered well over ten thousand retweets and tens of thousands of “likes” before it disappeared. 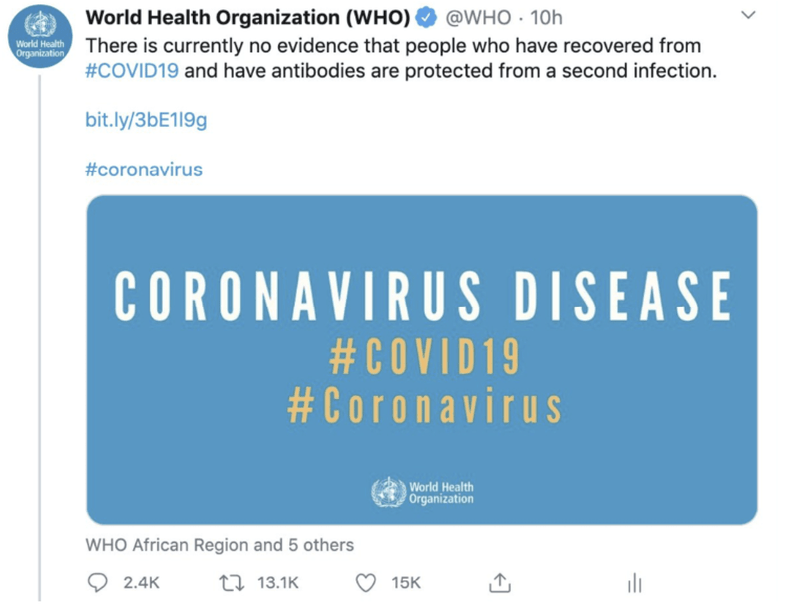 The controversial statement said: “There is currently no evidence that people who have recovered from #COVID19 and have antibodies are protected from a second infection.”

Health experts and some publications immediately took issue with the phraseology, pointing out that “no evidence” will be taken broadly taken as ‘confirmation’ that people are not protected via antibodies.

Most epidemiologists believe COVID-19 survivors do build up some immunity, but still admit the virus is so new it hasn’t been studied enough to come to definitive conclusions.

As Reason pointed out, the controversy comes as the idea of so-called “immunity passports” is being hotly debated:

On Friday, the WHO published a scientific brief on “immunity passports” — the idea that governments should grant special documents to citizens who test positive for COVID-19 antibodies, allowing them to move about freely. The WHO warned that this is premature, since “no study has evaluated whether the presence of antibodies to SARS-CoV-2 confers immunity to subsequent infection by this virus in humans.”

The WHO is correct that scientists have not determined the degree of immunity enjoyed by COVID-19 survivors.

One critic, statistician Nate Silver said in a tweet pushing back against the WHO’s Sunday Tweet, saying:

…“no evidence” means “something like ‘no definitive proof, yet’… But the average person is going to read it as ‘there’s no immunity to coronavirus,’ which is likely false and not a good summation of the evidence.”

It appears the WHO deleted the tweet out of concern that it could be misleading to the general public, however, it’s ultimately unclear why they made this decision, instead of just updating it with more nuanced information.