If there was any doubt that economic lockdowns supposedly inspired by the Covid pandemic are the peak in globalist propaganda, it disappeared not so “quietly” once and for all at 5:48am ET on Saturday, when the globalist organization which recently unleashed such lunatics as Klaus Schwab, best known for revealing the endgame with his book COVID-19: The Great Reset, deleted a that “Lockdowns are quietly improving cities around the world.” 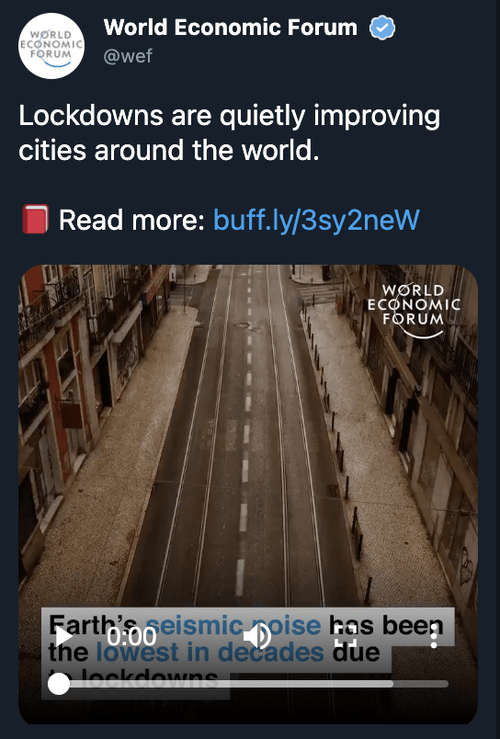 Remarkably, the WEF’s propaganda tweet – which was was accompanied by a video showing deserted streets and silent factories, that noted a record drop in carbon emissions and linked to an article claiming that silent cities contributed to better detection of minor earthquakes (because millions of workers losing their jobs is clearly less important than being able to measure the next M2 quake to the 8th significant digit) – survived just a few hours following a barrage of mockery and outraged comments.

Just before 6am ET on Saturday, the WEF finally deleted the tweet, admitting in a subsequent highly ratioed tweet that “lockdowns aren’t “quietly improving cities” around the world” despite still insisting that the restrictions have been “an important part of the public health response to Covid-19.”

We’re deleting this tweet. Lockdowns aren’t “quietly improving cities” around the world. But they are an important part of the public health response to COVID-19. pic.twitter.com/D2Pyb9x4yy

By this point, however, social media was  in a full blown frenzy over the WEF’s admission that covid lockdowns are just peak propaganda  – one which has the complicit participation of all Silicon Valley tech giants – and sparked en even louder response from an outraged non-Davos audience.

Too late. You already said locking us in our homes has improved the world, not the most casual of statements is it? Bit hard to forget you said that.

A group quickly swarmed on the corrected tweet, claiming correctly that the actual effect of lockdowns on halting the spread of the coronavirus remains a highly debated issue.

Now that’s 2 tweets you should delete. Lockdowns are inhuman and cause massive collateral damage to lives and livelihoods far beyond any “good” they do. They are straight from the CCP playbook.

The concession message looked like the WEF was actually “doubling down on [its] idiocy” instead of trying to do some damage control, former British MEP Martin Daubney wrote.

“We’re deleting this tweet, but doubling down on our idiocy in the process”

At the same time, the peasants demonstrated remarkable insight accusing the WEF of being “the hidden enemy of the people, worldwide. The unelected force that look to dominate our lives by influencing Governments all over the globe. It needs shutting down.”

The WEF, the hidden enemy of the people, worldwide. The unelected force that look to dominate our lives by influencing Governments all over the globe. It needs shutting down.

Some were furious that the propaganda arm of globalists had a “RIGHT TO RULE and DECIDE WHAT IS FAIR, EQUITABLE and REASONABLE” and warned that the crowd was coming for the WEF:

you guys are so clueless that you post something like this & then try to cancel it BUT YOU HAVE THE HIDE TO THINK YOU ARE BETTER THAN EVERYONE ELSE AND HAVE A RIGHT TO RULE and DECIDE WHAT IS FAIR, EQUITABLE and REASONABLE – a lot of you will be being prosecuted in the future imo

Others quickly saw through the propaganda flip-flopping, and straight to the heart of the WEF’s agenda, one of spreading “global socialism” which will make lives for billions of people a nightmare which making a handful of virtue signaling uber-globalists (who arrive in Davos on their private jets even as they parade with how green they are) richer than ever:

Must have contracted their social media input to them.

Bernardi seems to know his onions tho’ pic.twitter.com/31SED3Z7XG

Yet others had even more direct suggestions for the WEF:

Delete your account. And cancel your conference. The earth is not our prison and you are not our wardens.

At the end, the catastrophic gaffe left a huge dent on what little was left of the the globalist group’s reputation, and many users argued that it should just shut up:

Yes, @wef, but the damage is done now. Very many of us have seen, very clearly, just how twisted, controlling and downright evil your intentions are, and will resist them any way we can. We may be unable to stop you, but we can be a massive bloody nuisance every step of the way.

But most importantly, the tweet confirmed once again that what until now was a “conspiracy theory” pursued with rabid fervor by such tech giants as Google, Amazon and Twitter, was fact:

It's gone beyond conspiracy theory. It's a fact.

One of the great mysteries is how the world fawned over the WEF and Davos every year.

You can’t find group so tone deaf and so out of touch.

We need a Great Reset to permanently delete the WEF. https://t.co/xcGv9sZBLL

Hours later, as the WEF’s catastrophic fiasco went viral across the world, the WEF decided to triple down on its peak idiocy, and instead of just forgetting all about the matter decided that it’s best to engage with random twitter economists, and blame it all on “a working human being who made a mistake.”

It was written by a working human being who made a mistake. It was deleted.