Once it became clear – just a few seconds after AOC first rage-tweeted about RobinHood refusing to let “the people” trade more shares of $GME and $AMC before adding that she’d support a public hearing on what had just happened – that all the key players in the “WallStreetBets”/”Gamestop” trading saga would soon be dragged in front of Congress like a gaggle of tech CEOs, the newly elected Democrats and their hand-picked economic team were faced with a critical question: who exactly was going to preside over these proceedings on the regulatory side, since they are virtually all compromised by key connections to the financial services industry, and not just the big banks.

Over the past decade, a new category of financial beast has arisen. We have been writing about them for years. They’re alternatively called “high frequency traders” “high freaks”, and “orderflow frontrunners” for those enjoy speaking the truth, or “market makers” for the political correct, but after the events of last week, millions of people were either asking Google, or their one IBD analyst friend, to explain what ‘Citadel’ is, and how it works…. the same Citadel which threatened to sue Zero Hedge last June for accusing it of frontrunning orders, just weeks before regulators punished Citadel for frontrunning orders (oops).

Now, barely days after being confirmed as President Joe Biden’s new Treasury Secretary, Janet Yellen must preside over a major media circus and the most glaring indication yet of just how broken the US stock market is (thanks in large part to her actions while she was head of the Fed).

Which is a problem because as a reminder, Yellen received almost a million dollars in “speaking fees” in the past two years from the firm that is the quasi-monopoly “market maker” in the US, responsible for half of retail orderflow thanks to its domination of Robinhood trades… 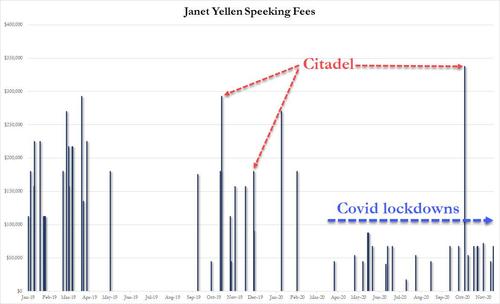 … and is why one month ago, Yellen pledged in an ethics form that she will recuse herself for one year “from when she last made paid speeches to the companies.” And yes, her last speech to Citadel was last October.

Alas it turns out this was all just a joke, and (un)fortunately for her and the ‘integrity’ of American so-called “markets”, the honorable Fed Chair Treasury Secretary has received permission from ethics lawyers to lead the proceedings, which will begin Thursday with a meeting of top US market regulators.

Then again we already kinda knew that because when asked during a Thursday White House press conference whether Yellen would recuse herself from advising the president on the ongoing GME stock shorting after having been previously paid upwards of $1 million in speaking fees from Robinhood’s largest customer, Press Secretary Jen Psaki didn’t seem to have a problem with relying on the new Democratic Treasury secretary’s counsel.

“Separate from the GameStop issue, the secretary of the Treasury is one of the world-renowned experts on markets, on the economy. It shouldn’t be a surprise to anyone she was paid to give her perspective and advice before she came into office,” Psaki told reporters, ignoring the obvious conflict of interest.

It then got downright surreal, when Psaki implied that it was sexist to mention Yellen’s conflict of interest because she’s a woman.

“I’m also happy to repeat that we have the first female treasury secretary,” Psaki said in opening her response to the question from a reporter, going on to say Yellen’s communications team would typically take those questions instead of her.

Reporter: Are there any plans to recuse herself from advising the President on GameStop and Robinhood situation?

Psaki: ‘No and she’s an expert and deserves that money.’

In any case, with Citadel client Janet Yellen in tow, congressional hearings are expected to follow later this month in the House and the Senate, with the House Financial Services Committee, led by Maxine Waters and stocked with firebrand progressives, leading the way. Here’s more on that from Bloomberg:

“Secretary Yellen believes the integrity of markets is important and has asked for a discussion of recent volatility in financial markets and whether recent activities are consistent with investor protection and fair and efficient markets,” the department said.

Yellen’s predecessors, including Steven Mnuchin, also organized meetings of financial agencies during times of tumult. They aren’t necessarily a signal that any policy moves are imminent. The SEC already said Friday it’s seeking to identify potential misconduct and will scrutinize brokerages’ decisions to halt buying that triggered a retail-investor revolt.

As we reported one month ago, inbetween stints running the Fed, where she was buying and monetizing US debt, and returning to take the reins at Treasury, where she will be printing US debt, Yellen earned more than $800K in speaking fees from Citadel, giving speeches as recently as last fall. As part of being confirmed in her new role, she pledged not to involve herself in issues involving Citadel without receiving a written ethics waiver from the Department, which she herself leads. She made similar promises involving several of the big banks, Barclays, Citigroup and Goldman Sachs.

Of course, Citadel would be most displeased it its investment was for nothing, and lo and behold, Yellen recused herself and will lead this “crusade” against HFT while still in Citadel’s pocket in one of the most glaring conflicts of interest in recent history.

The same top Treasury ethics official who signed off on Yellen’s conflicts of interest is now telling Reuters that of course Yellen needs to preside over whatever comes to pass on the regulatory front, to say nothing about working with Congress, since she is, in fact, the Treasury Secretary.

And anyone who dares to challenge Yellen’s conflict of interest will now be branded a sexist (see Psaki’s quote above).

In the memo granting Yellen permission to call Thursday’s meeting of regulators, which will be a quasi-public event closely watched by the press, with questions likely to be taken, Treasury ethics official Brian Sonfield acknowledged it would be “difficult, if not impossible” for Yellen to recuse herself from any matters involving dangerous market volatility.

“You are the Secretary of the Treasury, the duties of which require you to be involved in a broad array of matters focused on these sectors,” Sonfield wrote.

So with “ethics waiver” in tow, Yellen – as chair of the Financial Stability Oversight Council – will hold a hearing on the risks posed by redditors. Thursday’s meeting of regulators, many of whom happen to be on the committee isn’t being considered a formal session but merely an “ad hoc” gathering of top financial regulators.

As Reuters put it, last week proved that the power of the retail trader is very real but that’s largely because HFT traders have conspired with discount brokerages to frontrun virtually all of their order flow, easily amplifying moves like what we saw last week. That’s why the DTCC had to step in, or at least that’s what the public was told.

The assault on GameStop short-sellers took it to a new level as small traders appeared to act in concert as they organized buying over Reddit. Posts encouraging silver buying also boosted prices on Monday, although that proved short lived.

“The power of the retail investor exists,” said Chris Brankin, CEO at TD Ameritrade in Singapore.

“We could see other similar events more regularly, but be sure the regulators will look to curb any market (volatility) or manipulation,” he said.

Even though all the regulators – including members of the Federal Reserve Board, the New York Fed, The SEC and the CFTC – who will be present at Thursday’s meeting

Meanwhile, on Monday, the House Financial Services Committee announced plans to hold its hearing on Feb. 18. The House hearing has been entitled, “Game Stopped? Who Wins and Loses When Short Sellers, Social Media, and Retail Investors Collide,” and although no witnesses were listed, we can think of a few CEOs to whom the Democrats are eager to deliver a public spanking. After all, Robinhood and TDAmeritrade and E-Trade and the others, for a brief moment, exposed the fact that all of this plumbing that runs Wall Street now is new and complicated and almost nobody understands how it works.

Though, if anybody in this country does, its regulators like Janet Yellen and Biden SEC head Gary Gensler, who ran the CFTC under Obama. It’s old rats on a new ship. If anybody knows where the bodies are buried, it’s them, especially since it was they that created the massive asset bubble that made all this possible in the first place.