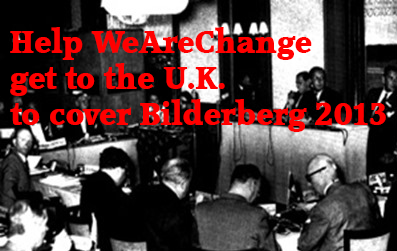 For many years now WeAreChange has done everything in its power to bring much needed attention to the secretive and elusive Bilderberg Group. We have been detained, threatened, interrogated, followed and harassed for covering the meetings and questioning its members. In the face of all the intimidation we stood strong, never backed down and continued to speak truth to power.

Our work is not easy since we have no bosses or financial backers, only you.  We have sacrificed many times, slept on floors or outside on the street, bum rides. We do everything on a shoestring budget and cut every corner we can to save money.

We love what we do and wish to continue our work and cover this year’s meeting in the U.K. and only with your help we can do so. If we are lucky enough to have your support, we would ask for your donations in order to document this year’s meeting, make video reports, investigate what happens and provide live video coverage.

After Bilderberg, if there is money left we will be looking for other stories to cover around Europe. If there are stories that you know of or have a place for us to crash anywhere in Europe please email us at Luke@wearechange.org .

OTHER WAYS TO DONATE
PAYPAL

2011: In Switzerland we were lucky enough to get a ride from the airport by someone we never met before and then crash with members of WeAreChange Switzerland. During our coverage we were detained and had our passports taken away for 30 minutes because we would not stop filming. We were threatened again many times with arrest and deportation while filming and followed by a police car everywhere we went. We were able to meet and interview 2 Swiss parliamentary members who became outspoken about the Bilderberg meeting after hearing about the suppression of the press. They wrote official letters to the police and the intimidation stopped immediately. We were then able to confront the CEO of Google, Eric Schmidt.

2012: In Virginia, we stayed at a friend’s house and every day of the meeting provided live video coverage of the protest, some times for over 12 hours without break. We released 12 never before seen confrontations with top Bilderberg members. We documented the arrest of protestors and help aid them in their court proceedings with video evidence. After the meeting, we were able to secretly take a picture of Bilderberg group organizers, which got us scolded by security and kicked off the premises.

IF WE CANNOT RAISE ENOUGH MONEY TO GET OVER TO THE U.K.

If we cannot raise the full amount of money needed to cover the expenses, we can refund your donation or if you would approve use the money for new video editing equipment that is also needed to continue our work. Below is a list of items that we currently need to take our operation to the next level.