So much for the COVID jabs being “100% effective” at preventing “serious illness.”

Michigan, now the epicenter of the American COVID outbreak, is desperately begging the federal government for more vaccines. But reports about a rash of infections in “fully vaccinated” patients might provoke a rethink.

The Detroit News reported that as many as 246 vaccinated Michigan residents later tested positive for SARS-CoV-2, including three who have died. The cases were reported between Jan. 1 and March 31, and the 246 had a positive test 14 or more days after the last dose in the vaccine series, said Lynn Sutfin, a spokeswoman for the Michigan Department of Health and Human Services.

“Some of these individuals may ultimately be excluded from this list due to continuing to test positive from a recent infection prior to being fully vaccinated,” she said.

“These cases are undergoing further review to determine if they meet other CDC criteria for determination of potential breakthrough, including the absence of a positive antigen or PCR test less than 45 days prior to the post-vaccination positive test. In general, these persons have been more likely to be asymptomatic or mildly symptomatic compared with vaccinated persons.”

The department had hospitalization data for 117 of the cases, but 129 were incomplete, Sutfin added. The three deaths were all “persons 65 years or older,” and two of them died within three weeks of completion of vaccination, she said. “While the majority of the population develops full immunity within 14 days of completion of their vaccine series, a small proportion appear to take onger to mount a full antibody response.” Of the 117 with data available, 11 were hospitalized, 103 were not hospitalized, and 3 are reported as unknown, Sutfin said.

As of April 4, about 2.95 million residents, or about 36.5% of Michigan’s population, have been vaccinated, either with one or two doses, according to the state website. About 4.7M doses had been administered. 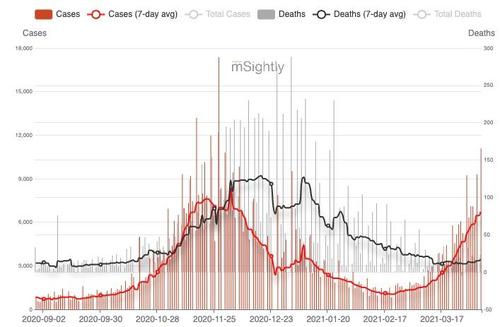 New cases have surged over the last month, pushing the 7-day average to its highest level since late last year. Even deaths have started to creep higher, a possible effect of mutant strains that are spreading faster in the state.