Ukraine’s Zelensky: “NATO Membership is the Only Way to End War in Donbass”

On Tuesday Ukraine’s president Volodymyr Zelensky issued a briefing to NATO Secretary-General Jens Stoltenberg on Russia’s troop build-up near Ukraine’s eastern border following Kiev’s accusations that Moscow is escalating its support to pro-Russian separatists in the Donbass region, and further that the Kremlin has aims of some type of “offensive” to weaken Ukraine’s sovereignty.

But more importantly it’s what Zelensky said about NATO on Tuesday that has provoked a severe reaction out of the Kremlin. He urged for the military alliance to immediately expand its Black Sea presence. “Such a permanent presence should be a powerful deterrent to Russia, which continues the large-scale militarization of the region and hinders merchant shipping,” Zelensky said during the phone call with NATO’s Stoltenberg, according to the president’s press service.

The Ukrainian president specifically cited “a very dangerous tendency with an increase in the number of ceasefire violations by the Russian occupying forces and the number of Ukrainian defenders killed,” according to the remarks.

And that’s when he reiterated Kiev’s desire to be admitted to NATO, something which Moscow has repeatedly warned against over the years, threatening that it could catapult the region toward a major war. Zelensky’s press release of the call included the following hugely provocative statements:

The President of Ukraine stressed that the most urgent issue in relations with NATO for Ukraine was the possibility of obtaining the NATO Membership Action Plan.

“We are committed to reforming our army and defense sector, but reforms alone will not stop Russia. NATO is the only way to end the war in Donbas. Ukraine’s MAP will be a real signal for Russia,” the President said.

Or based on the Kremlin’s to-be-expected swift and angry reaction to the statement, it would likely be the extreme opposite: namely major escalation which would draw in Kiev’s Western backers like the United States.

Kremlin spokesman Dmitry Peskov warned this would be “unacceptable” for citizens within the self-proclaimed Donetsk and Lugansk People’s Republics (DPR, LPR) – where fighting has raged going back to 2015. He underscored this would “only aggravate” the conflict. 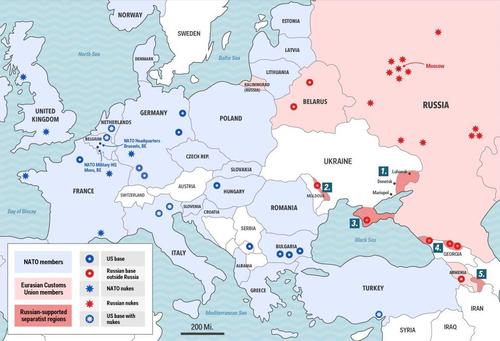 “We deeply doubt that it will somehow help Ukraine to deal with its internal problem. From our point of view, it will only exacerbate the situation further because people’s opinions cannot be overlooked in any way when you talk about joining NATO. And if you ask opinions of several million people in the self-proclaimed republics, you will understand that such a membership in NATO is deeply unacceptable for these people,” he emphasized according to TASS.

Zelensky’s talk of joining NATO is very likely a central reason why Russia appears to now be building up its forces near Ukraine. Likely there’s no “offensive” coming (there’s no evidence that a single Russian soldier has currently entered Ukrainian soil), but instead Moscow is sending a severe ‘deterrent’ message to the West, signaling what will happen if in the near future if there are indeed moves to formally admit Ukraine into NATO.