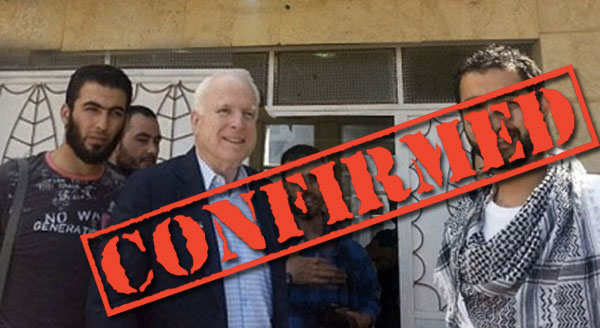 Senator John McCain recently appeared on Fox News and seems to have slipped up, accidentally confirming that the Syrian rebels he met with, did in fact have ties to ISIS. This was a foregone conclusion to people in the know in Syria who recognized General Salim Idris, the head of the Free Syria so-called “moderates”, who was in fact kicked out for being “too moderate.”

To the far left of the promo pictures used by rebels linked with ISIS, we also saw Khalid al-Hamad who is none other than the infamous “heart-eater” featured in a viral video where he cut out and ate the heart of a Shiite victim of ISIS in Syria. Still, people who have never been to the region, not interviewed a single fighter in Syria were quick to denounce claims of McCain’s posing with ISIS members as a “conspiracy theory.”

Now, McCain has slipped up and acknowledge that he met with ISIS, and the mainstream, corporate media has once again given him a pass.

McCain was trying to respond to Rand Paul’s claim that these photos of McCain with ISIS are in fact legitimate. Paul said the following to theDaily Beast:

“Here’s the problem. He [McCain] did meet with ISIS, and had his picture taken, and didn’t know it was happening at the time. That really shows you the quandary of determining who are the moderates and who aren’t. If you don’t speak Arabic, and you don’t understand that some people will lie to you—I really think that we don’t have a good handle on who are the moderates and who aren’t, and I think the objective evidence is that the ones doing most of the fighting and most of the battles among the rebels in Syria are the radical Islamists.”

So does this mean McCain is acknowledging that he himself has met with ISIS, thus giving him more expertise on the subject? That certainly seems to be the implication of what McCain said. Now, that statement may add fuel to the arguments that McCain met with members of ISIS and there’s photographic proof, a documented claim which people who swallow whatever the mainstream media tells them will continue to say has been “debunked,” even though those in the pictures have been identified and are positively confirmed to have direct ISIS ties.

So to be clear, John McCain claims to know Salim Idris and Khalid al-Hamad, both featured in the photos taken with him in Syria. Both of these men are both linked with ISIS, and both were kicked out of non-ISIS rebel groups for being “too moderate.” According to McCain, he is “in contact” with Idris and al-Hamad “all the time.” Why isn’t Senator McCain being investigated for his ties with ISIS members, since both of these men are in fact ISIS-linked?