50 Cent Tells His Fans to Vote for Trump

Rapper and entrepreneur 50 Cent recently expressed his support for Donald Trump and seemed to indicate that everything is riding on one issue, his tax rate. In a recent Instagram post, 50 Cent, who files his businesses under his government name Curtis Jackson, told his Instagram followers to vote for Donald Trump.

Jackson seemed to be upset by Biden’s proposed tax rate for the wealthy. He took a photo of his television showing a proposed 62% tax rate, and said that he doesn’t even care if Trump “doesn’t like black people,” he’s voting for Donald Trump anyway.

“WHAT THE FCK! (VOTE ForTRUMP) IM OUT, FCK NEW YORK The KNICKS never win anyway. I don’t care Trump doesn’t like black people 62% are you out of ya f****** mind,” Jackson said in the now-viral post. 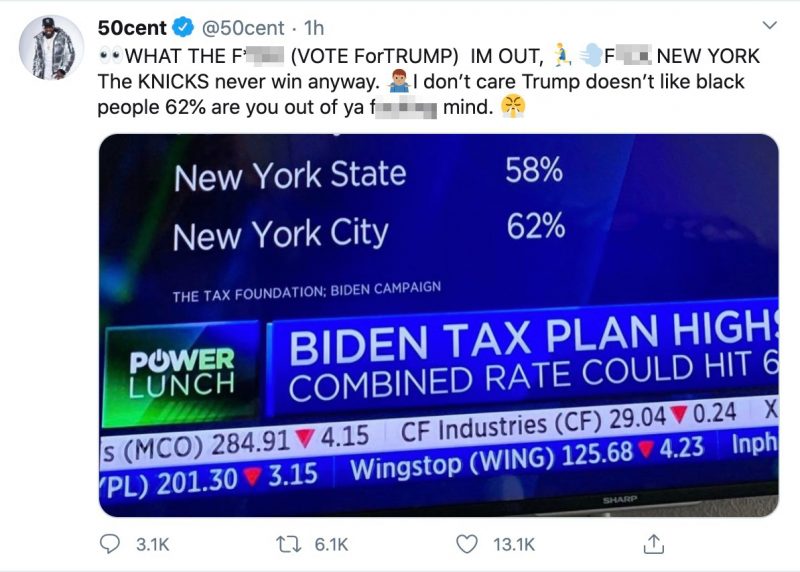 As he probably expected, his post sparked outrage among a large portion of his audience and was instantly praised in conservative media.

His posts even caught the attention of the Trump family. Jackson continued to post in support of the President after his original comments made the news. In a later tweet, he posted a video of a Fox News segment where his comments were discussed, and he quoted one of the hosts, saying that he does not want to become “20 Cent.”

Christopher Bouzy, a Black CEO and the founder of Bot Sentinel, was one of the first prominent names to criticize Jackson for his remarks. Bouzy called out Jackson as well as Kanye West and Ice Cube, and accused them of being opportunists.

Men like Kanye West, Ice Cube, and 50 Cent aren't Black leaders, they are nothing more than opportunistic puppets who would sell their own people into slavery for a profit. They offer nothing tangible to society; these men should be ignored & discarded to the dustbin of history.

Black men who would endorse a man who disparages Black people, repeatedly disrespects Black women, and does nothing for the Black community aren't "free thinkers," they are sellouts. In 1964, Malcolm X warned us about Black sellouts; they are not a new phenomenon. https://t.co/CQHvaQvLh8

It appears that Jackson is clearly supporting Donald Trump in the election this year, but he has also been critical of the president in the past, so perhaps he is just voting for what he perceives as the lesser of two evils. Jackson has previously attacked the president on his COVID-19 response, saying “You wanted a reality show host as president. Well, now you’re on Survivor.”

In 2017, during an interview with US radio station Hot 97, Jackson said that he was offered $500,000 to make an appearance as part of Donald Trump’s 2016 election campaign. In the same interview, he went on to call Trump’s presidency an “accident.”

“They wanted to pay me $500,000 as part of the campaign just to make an appearance. His presidency is an accident. If you were a President by accident, you might do some of the things Donald Trump is doing… I think he was [campaigning] to build his profile for a bigger deal on television, and everything else,” Jackson said in the interview.

It is also important to note that the initial tax figures posted by Jackson are a bit misleading, as CNBC noted these figures are based on a study that doesn’t include deductions or loopholes that most people take advantage of, and will only be applied to top earners.

Under Biden’s plan, the effective tax rate for the top 1% would increase from 26.8% to 39.8%, according to the Tax Policy Center, which means that top earners in California and New York City would pay effective state and federal tax rates of around 53%, compared with the roughly 40% they pay in effective rates today.

As of 2020, Jackson’s net worth is estimated to be $30 million, which is a huge drop from previous years, when his net worth was declared at $150 million by Forbes.