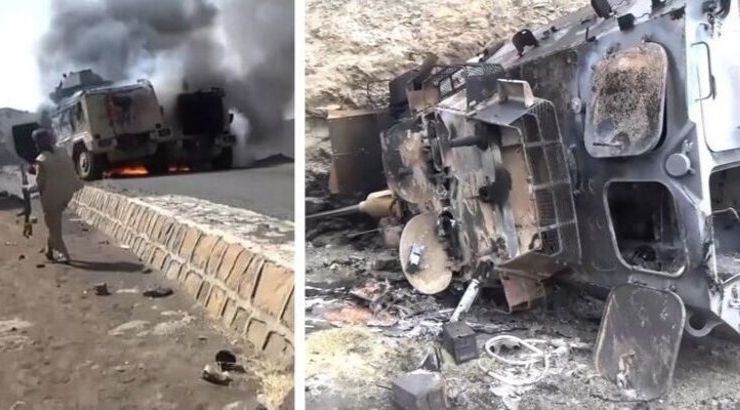 Many may have hitherto been led to believe that the Houthis were a ragtag armed force lacking in sophistication.

Many, seeing the drone and missile attacks on Saudi oil plants, may have declared it to be a false-flag attack carried out by Riyadh to boost Aramco’s market value; either that or it was an operation carried out by Iran or even Israel. On Saturday September 28, the Houthis put paid to such speculation by confirming what many, like myself, have been writing for months; that is, that the asymmetrical tactics of the Houthis, combined with the conventional capabilities of the Yemeni army, are capable of bringing the Saudi kingdom of Mohammed Bin Salman to its knees.

The Yemeni army’s missile forces are able to carry out highly complex attacks, no doubt as a result of reconnaissance provided by the local Shia population within the Kingdom that is against the House of Saud’s dictatorship. These Houthi sympathisers within Saudi Arabia helped in target identification, carried out reconnaissance within the plants, found the most vulnerable and impactful points, and passed this intelligence on to the Houthis and Yemeni army. These Yemeni forces employed locally produced means to severely degrade Saudi Arabia’s crude-oil-extraction and processing plants. The deadly strikes halved oil production and threatened to continue with other targets if the Saudi-conducted genocide in Yemen did not stop.

On Saturday 29 the Houthis and the Yemeni army conducted an incredible conventional attack lasting three days that began from within Yemen’s borders. The operation would have involved months of intelligence gathering and operational planning. It was a far more complex attack than that conducted against Aramco’s oil facilities. Initial reports indicate that the forces of the Saudi-led coalition were lured into vulnerable positions and then, through a pincer movement conducted quickly within Saudi territory, the Houthis surrounded the town of Najran and its outskirts and got the better of three Saudi brigades numbering in the thousands and including dozens of senior officers as well as numerous combat vehicles. This event is a game changer, leaving the US, Mike Pompeo and the Israelis and Saudis unable to lay the blame on Iran as all this took place a long way from Iran.

The large-scale operation was preceded by Yemeni rocket artillery targeting Jizan airport, with 10 missiles paralyzing any movements to and from the airport, including denying the possibility of air support for the encircled troops. The Houthis also hit the King Khalid International Airport in Riyadh in a key operation that targeted Apache helicopters, forcing them to leave the area. Nearby military bases were also targeted so as to cut off any reinforcements and disrupt the chain of command. This led to the Saudi forces fleeing in disorganization. Images shown by the Houthis show a road in the middle of a valley on the outskirts of Najran with dozens of Saudi armored vehicles trying to flee while being attacked from both sides by Houthi RPGs together with heavy and light weapons. Visual confirmation of the debacle can be seen in the number of casualties as well as in the number of prisoners taken. Images show lines of Saudi prisoners walking under Yemeni guard towards prison camps. This is something extraordinary to behold: the Saudi army, the third largest purchaser of weapons in the world, getting comprehensively walloped by one of the poorest countries in the world. The numbers say it all: the Houthis were able to control more than 350 kilometers of Saudi territory. Given that the Saudi military budget is almost 90 billion dollars a year, this achievement is made all the more extraordinary.

Houthi forces employed drones, missiles, anti-aircraft systems, as well as electronic warfare to prevent the Saudis from supporting their troops with aviation or other means to assist their trapped men. Testimony from Saudi soldiers suggest that efforts to rescue them were half-hearted and of little effect. Saudi prisoners of war accuse their military leaders of having left them prey to their opponents.

The Yemeni army and the Houthis were within less than 10 days able to inflict a devastating blow to both the credibility of US defense systems and the Saudi military. They did this by employing creative methods suitable for the objective at hand.

They initially revealed the internal vulnerability of the Kingdom through such a level of penetration into Saudi Arabia that they were able to conduct internal reconnaissance through the assistance of infiltrators or local collaborators so as to know exactly where to hit the oil installations for maximum effect and damage.

They subsequently demonstrated their technical and cyber capabilities through an asymmetrical operation employing drones of various types as well as electronic warfare to blind the US Patriot system’s radars, in the process halving Saudi Arabia’s oil production for a period of time Aramco is yet to determine.

Finally, the most surprising and astounding aspect of these recent events is this most recent Yemeni ground operation that was carried out in hostile territory and succeeded in surrounding three brigades consisting of thousands of men and their equipment. Thousands of Yemeni soldiers loyal to Ansarullah (Houthis) took part in this successful operation, supported by drones, ground-attack aircraft and air-defense batteries. Such capabilities are ordinarily better associated with well-trained and well-equipped militaries rather than militaries coming from the Third World.

The Houthis issued a clear message to Riyadh when they hit its oil installations. They effectively let it be known that they had the means and capability to damage the Kingdom irreparably, leading ultimately to the overthrow of the House of Saud.

The Yemeni army spokesman announced, after hitting the Saudi oil facilities, that they would stop all offensive actions using drones and missiles, leaving it up to Riyadh to decide whether things stopped there and they sat down at the negotiating table to end the conflict, or whether Saudi Arabia was in the mood for more of the same treatment.

Mohammed bin Salman would no doubt have received manifold reassurances from the Americans, explaining away the failure of the Patriot systems and assuring him that more American assistance was on the way; and that it would, moreover, be impossible to come to an agreement with the Houthis, especially given that they are considered to be a proxy of the Iranians (a debunked lie); not to mention, of course, the huge loss of prestige that would befall the Saudis, Israelis and Americans were such a capitulation to occur.

There is already talk in Riyadh of receiving new supplies of the THAAD system (similarly useless against Houthi asymmetrical warfare) and other very expensive American air-defense systems. It is too bad for the Saudis that the US has nothing like the Pantsir and the Russian BUK systems, which allow for a multi-layered air defense, ideal for defending against small, low-flying drones and missiles that are difficult to intercept with such systems as the Patriot and THAAD.

Instead of starting peace talks to stop the ongoing genocide in Yemen and being hit again by the Houthis in response, Mohammed bin Salman and his advisors seem to have seen it fit to commit further war crimes in Yemen.

Faced with such intransigence, the Houthis went ahead with a new attack even more devastating for Saudi morale and discombobulating for Western policy-makers. Thousands of men and their equipment were either killed, wounded, or taken captive in a pincer movement reminiscent of the DPR and LNR’s actions in Ukraine in 2015 where Kiev’s forces was similarly surrounded and destroyed.

Usually such pincer movements require thorough reconnaissance to determine where best to surround the enemy. Furthermore, air support and air-defense systems would be necessary to ward off American and Saudi responses. In addition to all this, troops and their equipment are needed together with the necessary training for such assaults that require coordination as well as quick and effective execution of orders. All these requirements were met as a result of the excellent preparation and knowledge of the terrain by the Yemeni army and the Houthis.

If the attack on Saudi oil facilities had such an impact, then the even more dramatic attack of this last Saturday will have forced Mohammed bin Salman and his American allies to face a very harsh reality. Saudi Arabia, it will now need to be recognized, does not have the capacity to defend its borders from Yemen, leaving the Houthis and the Yemeni army free to enter Saudi territory at will while showing little regard for the opinion and feelings of the Saudis and Americans.

This is a triple checkmate for the Houthis against Riyadh. Firstly, they showed that they had enough local support within Saudi Arabia to have ready internal saboteurs in the event of an all-out war with Iran or Yemen. Then they showed they have the capacity to cripple Saudi Arabia’s oil production. Ultimately, Yemen’s conventional forces could redraw the boundaries between Saudi Arabia and Yemen in the latter’s favor should Yemeni leaders decide to invade and occupy a strip of Saudi territory to secure a buffer zone, given that Saudi forces have been violating Yemen’s sovereignty and massacring civilians willy nilly for the last five years.

It bears reflecting on the significance of these events. The third-biggest arms spender in the world is incapable of defeating the poorest Arab country in the world. It is, moreover, incapable of protecting its national interest and borders from this impoverished Arab country. The Houthis are showing to the world what a poor but organized and motivated armed force can do using asymmetrical methods to bring one of the best-equipped militaries in the world to its knees. This conflict will be studied all over the world as an example of how a new means of warfare is possible when technological and cyber capabilities are democratized and available to those who know how to use them appropriately, as the Houthis have shown with their use of drones and electronic warfare.

With the Houthis enjoying a high level of leverage, through a combination of missile capabilities, the holding of many prisoners of war, and saboteurs spread throughout Saudi Arabia (apropos, a strange fire occurred in Jeddah on Sunday at the Al-Haramain railway station), it may be time for Riyadh to accept the tragic consequences of this useless war and sit down at the negotiating table with Ansarullah.

Washington and Tel Aviv will try in every way to prevent such negotiations. But if Mohammed bin Salman and his family wish to save their kingdom, it is better to start talking to the Houthis immediately. Otherwise it is only a matter of time before another attack by Ansarullah leads to the complete collapse and ruin of the House of Saud and the Kingdom of Saudi Arabia.

Republished from Strategic-Culture.org with permission