America’s Oldest Bank Adopts Cryptocurrencies, Will Treat Bitcoin as “Any Other Asset”

The oldest bank in America will now be storing Bitcoin on behalf of its asset-management clients, according to the Wall Street Journal.

BNY Mellon’s announcement marks the first time one of the big custody banks has unveiled a road map for treating digital currencies as any other asset.

Decrypt reports that the bank plans to enable cryptocurrencies to flow through the same systems that it uses for its traditional currencies and stocks.

It has created a prototype for doing this and is engaging with clients to see if they want to use it.

The reaction helped extend a rebound from overnight lows (crypto was oddly weaker after MasterCard and Amazon both announced pro-crypto news), back above $46,000… 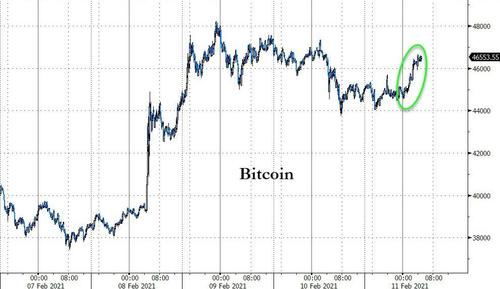 BNY Mellon’s move is ironically timed as it follows Tim Lane, the deputy governor of The Bank of Canada, proclamation that costly verification methods and unstable purchasing power makes cryptocurrencies like Bitcoin a “flawed” method of payment.

In a speech on “payments innovation,” Lane desperately attempted to pour cold water on the decentralized system of payments would entirely disrupt his industry, exclaiming further that, “the recent spike in their prices looks less like a trend and more like a speculative mania – an atmosphere in which one high-profile tweet is enough to trigger a sudden jump in price.”

He doth protest too much we think.