Twitter is once again being called out for its free speech hypocrisy and double-dealing when it comes to influential and wealthy foreign governments allied closely with Washington. In this latest case Twitter has purged accounts of recent Saudi political prisoners.

A number of prominent Saudi activists and public intellectuals that ran afoul of the royal family have languished in Saudi prisons since the 2017 crackdown under the auspices of Crown Prince Mohammed bin Salman (MbS), which most famously saw a number of princes and high profile officials temporarily confined to the Ritz-Carlton hotel in Riyadh.

According to Middle East Eye (MEE) Twitter has removed ‘blue check’ verification badges of many of these prisoners given their account inactivity, or in other cases suspending them altogether.

The report details some of the following instances:

Among those whose verification label has been removed are Ali al-Omary and Awad al-Qarni, two senior religious figures who have been jailed since 2017. They were seized during a purge that followed Mohammed bin Salman‘s rise to the position of crown prince.

Similarly, the accounts of the Saudi philanthropist Khaled al-Mohawesh and journalist Khaled al-Alkami, also jailed in the 2017 purge, had their blue tick removed, according to the advocacy Twitter account Prisoners of Conscience. It added that the account of economist Essam el-Zamil, another political prisoner, has been suspended. He tweeted under the handle @Essamz.

Some of the activists were reportedly targeted by MbS because they publicly spoke out against the economic blockade on neighboring Qatar, a diplomatic crisis which has since been largely resolved, with the Saudi-UAE sanctions on Qatar lifted.

Others were reportedly women’s rights activists and those seen as luke-warm or doubtful on MbS’ promises of “reform” in the kingdom.

In many instances, activists or protesters had “terrorism”-related charges brought during their trials, which in Saudi Arabia is often broadly applied to enemies of the ruling family, especially when it comes to Shia dissidents in the country’s east.

The controversy comes amid international pressure for Riyadh to free imprisoned activists in the kingdom:

This is welcomed progress that we hope is built on for the release of others.

Twitter has a current policy of removing or de-verifying “inactive and incomplete” accounts, including for the deceased, but regional human rights observers say that in this context it’s “uncalled for” and could potentially be seen as rewarding oppressive governments like Saudi Arabia.

Two such high-profile religious figures which have recently been ‘de-verified’ were featured in the MEE report: 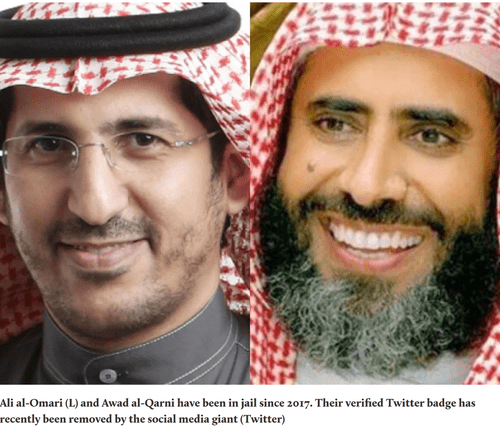 Abdullah Alaoudh of the Gulf at Democracy for the Arab World Now (DAWN), explained: “While there is a policy to remove inactive accounts, those who are forcibly disappeared or arbitrarily detained should be treated as an exception,” he told Middle East Eye.