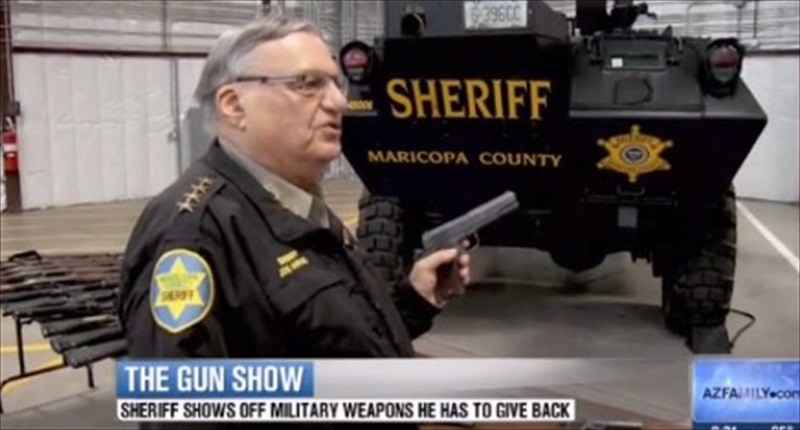 “It really doesn’t mean anything,” Arpaio said at a press conference on Tuesday. “Look at the handguns. They probably don’t work anyway. We have plenty of our own.”

Arpaio and the Maricopa County Sheriff’s Department have four months to return about 200 weapons, including M-16 and M-14 rifles, as well as two armored vehicles, five helicopters, and 158 pairs of night vision goggles they have acquired through the Defense Department’s Excess Property Program, commonly known as the “1033 program.”
The department will reportedly ask for an extension on one of the helicopters, saying that one they ordered as a replacement will not be ready until March 2015.

Overall, 100 departments around the country were suspended from the program, which provided local law enforcement agencies with surplus military equipment. Arpaio defended the initiative in an interview with The Arizona Republic last month.

“We want this military surplus so we have enough firepower to protect ourselves and the public,” Arpaio was quoted as saying.

However, his department was “terminated” from the program after reportedly losing nine weapons since 1993. Arpaio said last month that between internal audits found between 20 and 22 firearms had “vanished” from his department, with several of them being taken home by officers after they retired.

Arpaio said on Tuesday that his department has replaced most of the weapons it received through the 1033 program with more modern firearms, and plans to buy new night-vision goggles, as well.

“We were buying those anyway,” he said. “We have the money.”