Article: The Elites Perversion With Power and Control – How Deep Does The Rabbit Hole Go 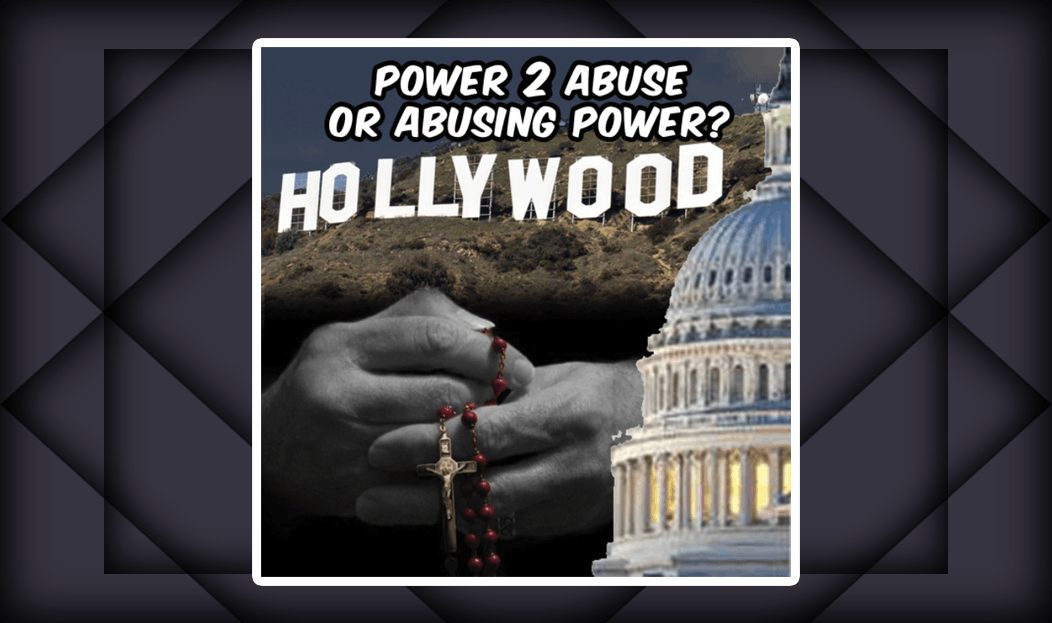 Alright, this is going to be an important video. I will be discussing the open Hollywood conspiracy that is being exposed. One of the main reasons why I wanted to make this video is because the big media entertainment news industry never admits to any wrongdoing and criminal behavior. This time they have been caught red-handed covering up aiding and abetting. They are accomplices to not only sexual predators but also pedophiles. In this video, we’re just going to get to the tip of the iceberg which many people feel will destroy this entire industry. I don’t know about you, but for me, an industry that protects and harbors monsters should be toppled.

The tip of this iceberg is, of course, media mogul Harvey Weinstein and this case by itself proves that there is a conspiracy.

Dozens of women are coming out talking about the sexual abuse that they suffered under this politically connected media mogul. As further details emerge, the situation becomes even more disturbing. We’re finding out that Harvey Weinstein preyed on victims that were 17 years of age and tried to get them drunk and sexually abuse them. I know a lot of people are shocked by these latest revelations but they shouldn’t because Hollywood has been giving us hints for years. 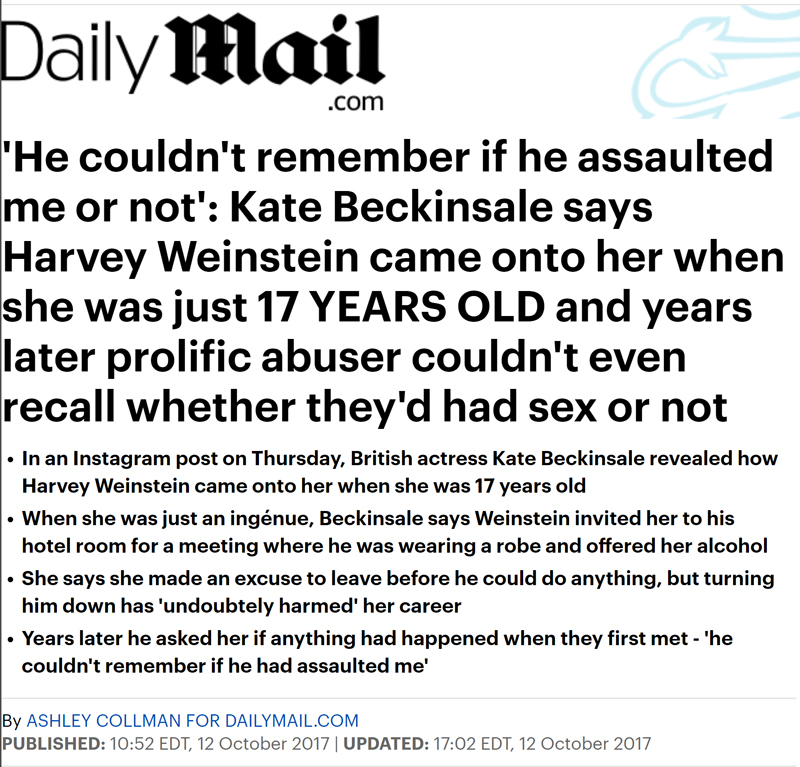 The actress Deanna Russo tweeted in 2010 that “My friend says I need to have sex with Harvey Weinstein to make it in Hollywood. Could I opt for getting beat up instead, like in a gang?”

Gweneth Paltrow spoke about this in 1998. “But he will coerce you to do it. So Harvey said I tell you what go on and talk about your movies and what would Harvey say and in return what Harvey would do for you?

30 rock even made a skit about this topic with one of the actresses saying “She’s not afraid of anyone in show business. That she “turned down intercourse with Harvey Weinstein on no less than three occasions out of five.” Seth MacFarlane even made jokes about this. “Congratulations you five ladies no longer have to pretend to be attracted to Harvey Weinstein, ” and people in the industry knew full well what Harvey Weinstein did. They chose to remain quiet about it for over 30 years even while Hollywood demonstrates its complicity while dropping hints about Harvey Weinstein out in the open for everyone to see. Ultimately what we see from this is just how much the corporate Hollywood media empire industry loved this sexual predator at least until he got caught. Meanwhile the media celebrities, politicians, and even local law enforcement knew about it and still decided to look the other way. 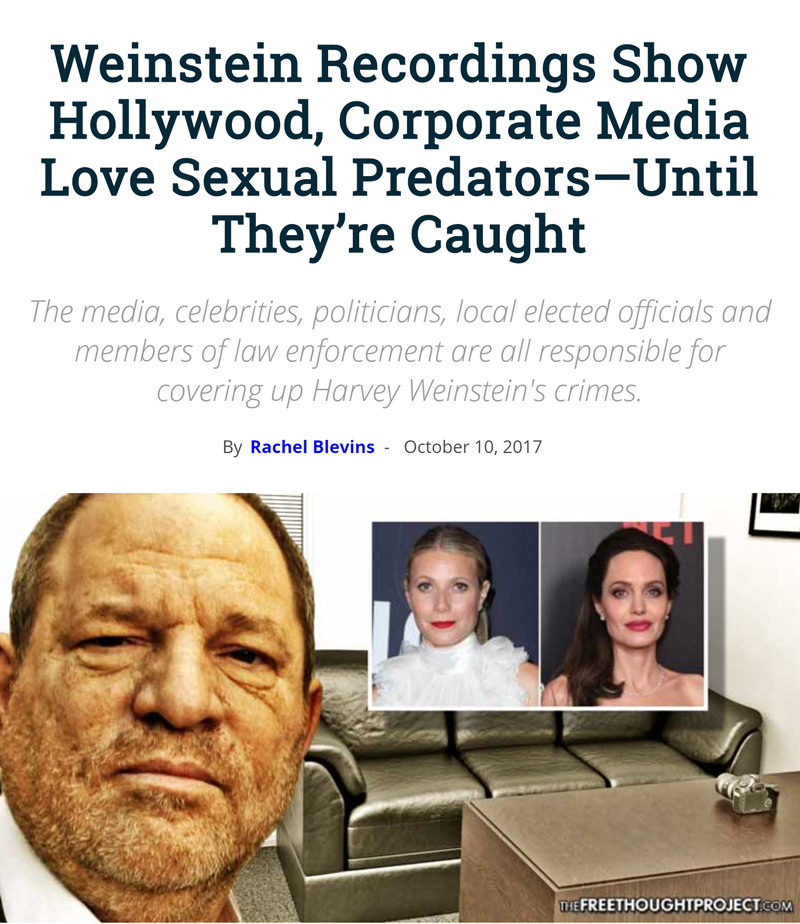 I mean this man was praised and thanked more than God at the 2015 Oscars while everyone was still running inside jokes about him being a dangerous sexual predator. The cover-up here is the most sinister aspect of this entire case as we’re learning about how NBC actively protected Weinstein. The top NBC executives squashed the bombshell Harvey Weinstein story and a reporter had to leave the network and give the story to the New Yorker after facing months of opposition. NBC is responding saying that they “let the story slip away” but in reality, they killed the entire story. The reporter on the case saying “NBC did everything they could to delay it, complicate it, and ultimately kill it.” 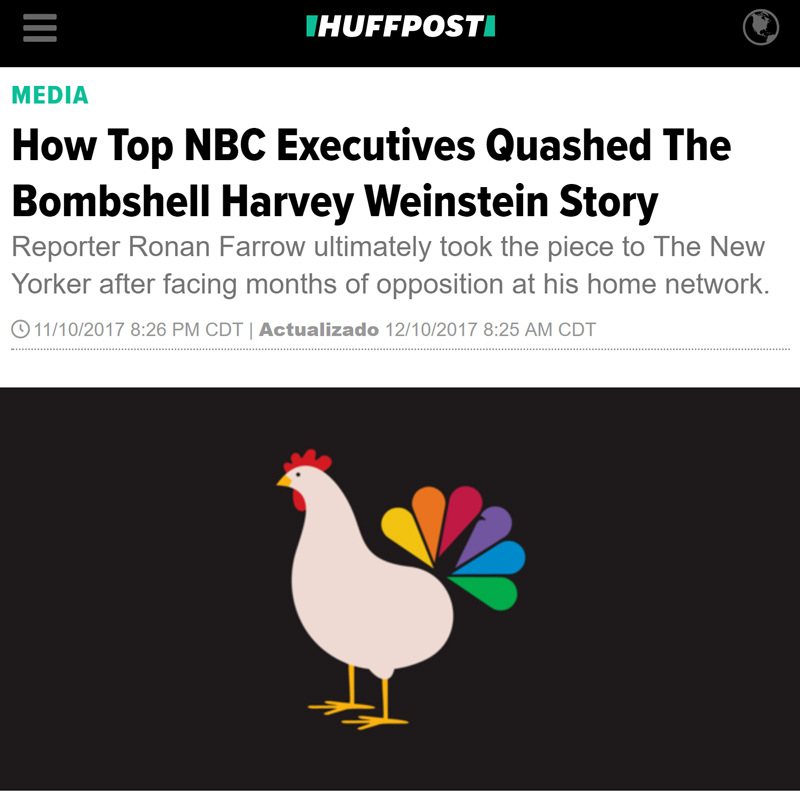 The New York City Police Department had secret audio of Weinstein admittedly claiming he groped a woman while sexually harassing another woman at the time and they still never pressed any charges. The New York Times sat on this story for over 13 years with the reporter who initially worked on this piece in 2004 saying that “I was told at the time that Weinstein had visited the newsroom in person to make his displeasure known. I knew he was a major advertiser in The Times and that he was a powerful person overall.” She also claims that she got personal phone calls from Matt Damon and Russell Crowe personally vouching for him. The story never ran until 13 years later. 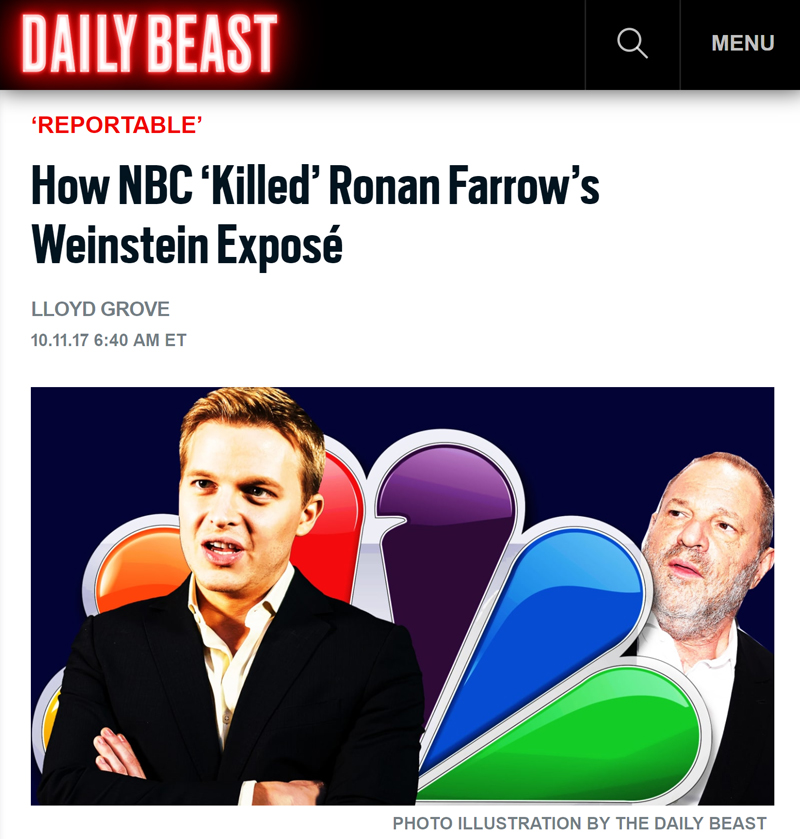 The Weinstein Company was aware of the payouts in 2015. The money Harvey Weinstein would pay his victims to sign NDA’s and their life over so they couldn’t speak out against his crimes. They still didn’t do anything about it.

Imagine being a victim of Harvey Weinstein and NBC, The Times, local law enforcement, his company and other celebrities are actively covering up his crimes. Imagine viewing all this coverup and the pressure of actively speaking out against this man. The odds of even getting justice. Due to this suppression for over 30 years they’re most likely won’t be any justice in this case.

We’re learning that Harvey Weinstein just fled to Europe on his private jet to allegedly turn himself into a sex addiction rehab clinic. 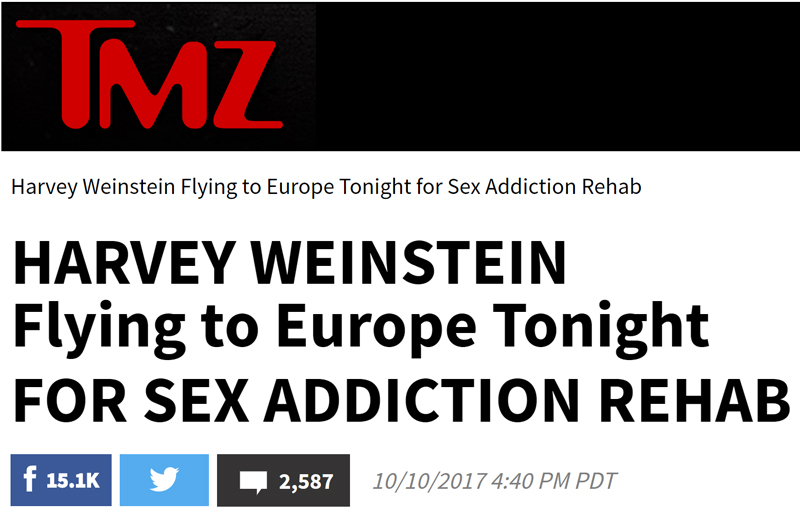 We see a very similar move made by famous director Roman Polanski who raped teens and underage children and ultimately fled to Europe to avoid prosecution. Polanski is a man who’s still seen as a big hero in Hollywood and praised by celebrities. Harvey Weinstein in 2009 wrote that Polanski has served his time and “must be freed.” 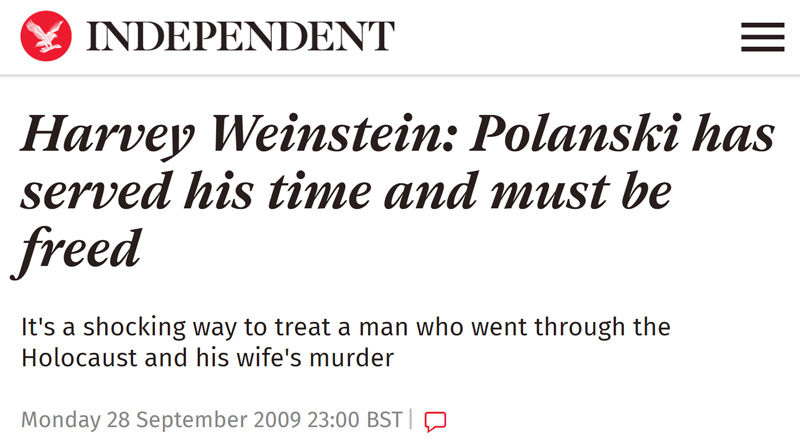 You can now clearly see how these sexual predators and pedophiles all protect each other because they’re in the same industry. They are in the upper echelons of it. The FBI just opened up an investigation into Harvey Weinstein after they feared he would flee the country and that’s precisely what he just did. That way he could just never come back like Polanski and never be held accountable for his horrible actions. 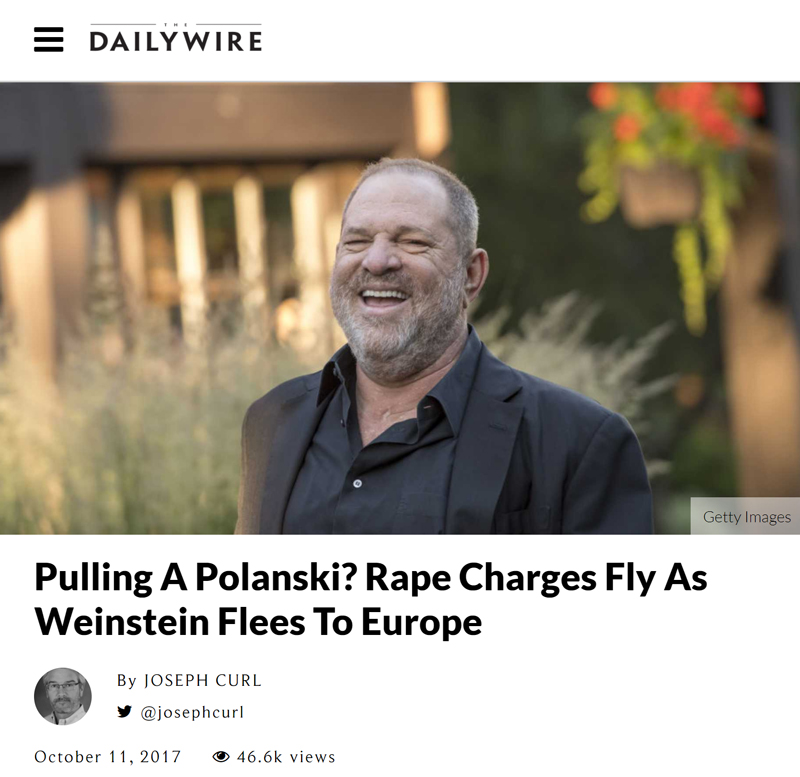 The reason why I stated that Harvey Weinstein is just the tip of the iceberg is that Hollywood is filled not only with sexual abusers but also pedophiles.

As Corey Feldman even said, “The number one problem in Hollywood was and is and always will be pedophilia.” 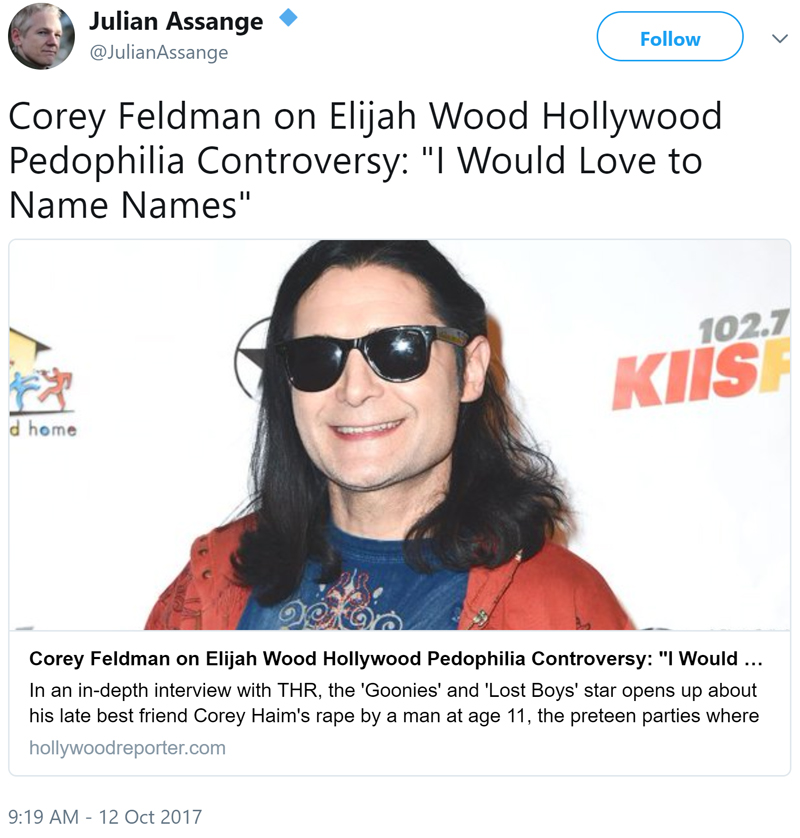 Corey Feldman came out afterward and said that he would love to name names, but he still hasn’t. Terry Crews has even come out and discussed how he was sexually assaulted by another high-level Hollywood executive.

So has James Van Der Beek and even Rob Schneider who said the mogul is not a lone wolf. 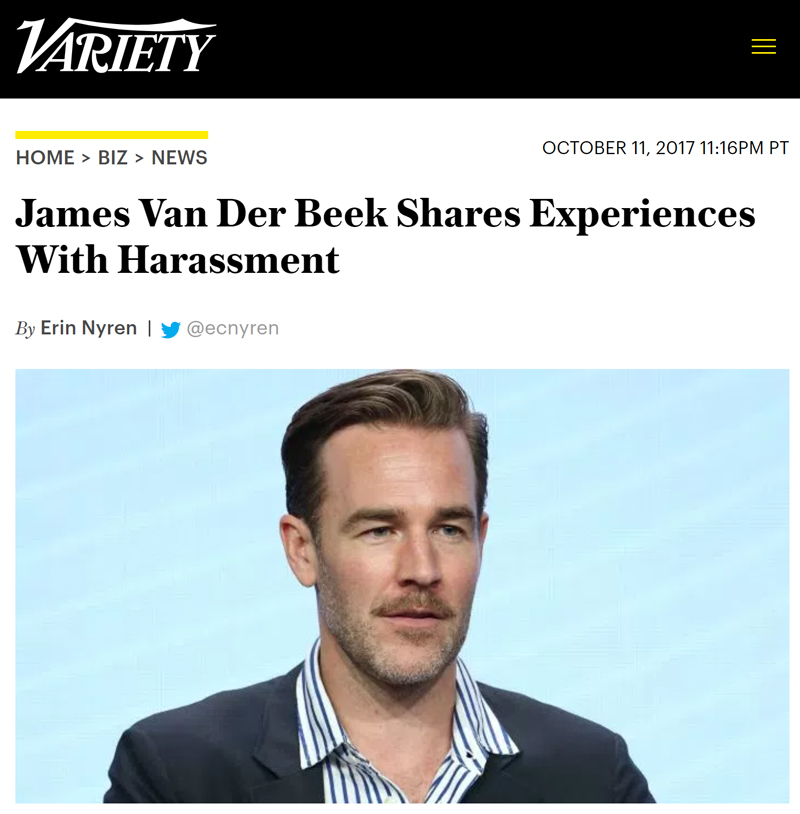 Rob Scheider knows it because he too was sexually harassed by a director. Elijah woods even came out previously and said that “Hollywood has a pedophile problem.” This industry needs to be exposed, needs to be toppled, because it is filled with pedophiles and sex abusers. With a lot of these abusers being so powerful that they have still yet to face any repercussions for their horrible actions. Many famous, powerful celebrities are even afraid to name the individuals that likely continue to do this. These people are not only connected to the police, the news business, but also to high-level politicians.

We all know the same exact thing is going on in US politics. We exposed the horrible actions by Denis Hastert, former UK Prime Minister Ted Heath, Jeffrey Epstein, and of course Jimmy Savile. The Savile situation that the BBC actively covered up and made sure that Jimmy Savile’s connections to the UK establishment were never exposed. It’s not just in Hollywood that these crimes happen, they also occur in the upper echelons of the supposed elite community especially amongst politicians. To make the situation worse, we’re even finding out that Rose McGowan the actress who has emerged as a Hollywood voice in the Harvey Weinstein sexual assault scandal has just revealed that Twitter has locked her account. On Wednesday night she posted evidence that multiple producers were involved in this entire scandal. 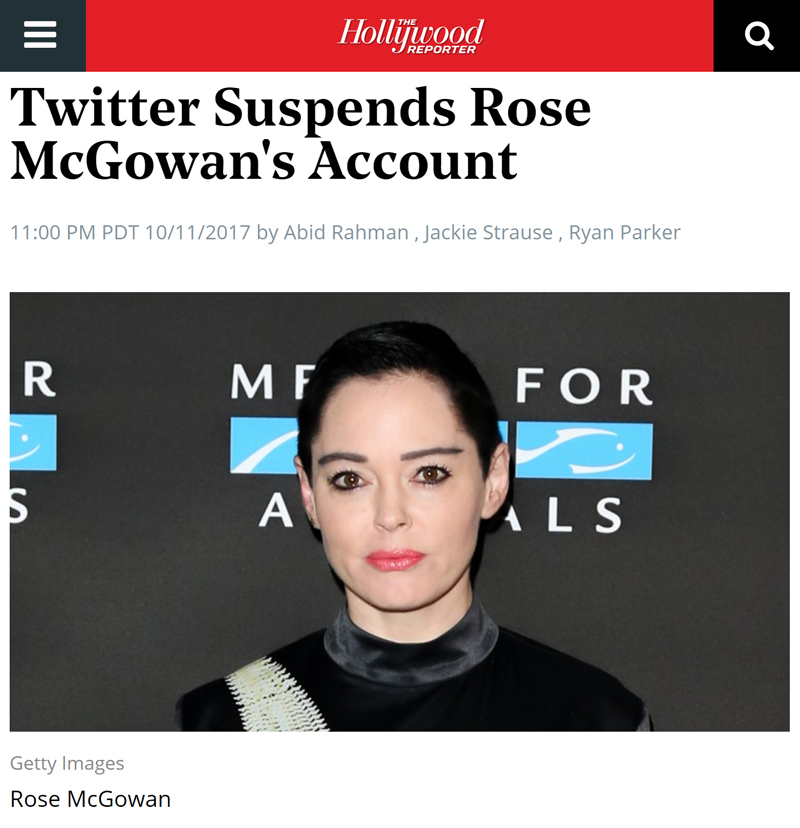 We have to understand all of the bigger dynamics behind whats happening here if you examine sexual abuse its all about power and the powerful being able to get away with these activities. Once you reach a certain level of fame, once you reach a certain level of money, sadly human beings naturally seek something more than just those two basic things. Damaged people who have an empty void within themselves trying to fill up that void with those two superficial things fame and money. When they reach enough of that, they seek other things like power. The power over other human beings. Being able to dominate them, control them, hurt them, silence them, and abuse them. All with the elitist perversion of being able to get away with it entirely. If you look at the upper echelon of any industry ether political or media, you will see rampant cases of these types of abuse. It needs to be stopped, and the only way to do that is to expose it. To shine a light on the darkness and reveal these private, monstrous, evil, dark energy, vampire-human beings for what they are.

We can only do that with a free and open press not an official corporate press. We need one that will not ignore the victims of such abuse. Ones like YouTube who are now deciding to do just that by taking away voices like mine and those of other independent journalists. They censor us while endorsing other alternative news sources as authoritative. Voices that of course cover up and protect pedophiles and sexual abusers. This is why an independent and free press is more important than ever and could only be possible because of you and your participation.

I’m very curious about what you guys think about this situation and how far the rabbit hole goes in this story. I’ll be paying attention very carefully to your comments, and of course, I’m thank you so much for watching, reading, and supporting us.

Thank you for financially supporting us on WeAreChange.org/donate and allowing us to be a free and independent news organization. An organization that is free to discuss these important issues without any fears or concerns.

I love you guys. Thank you again.