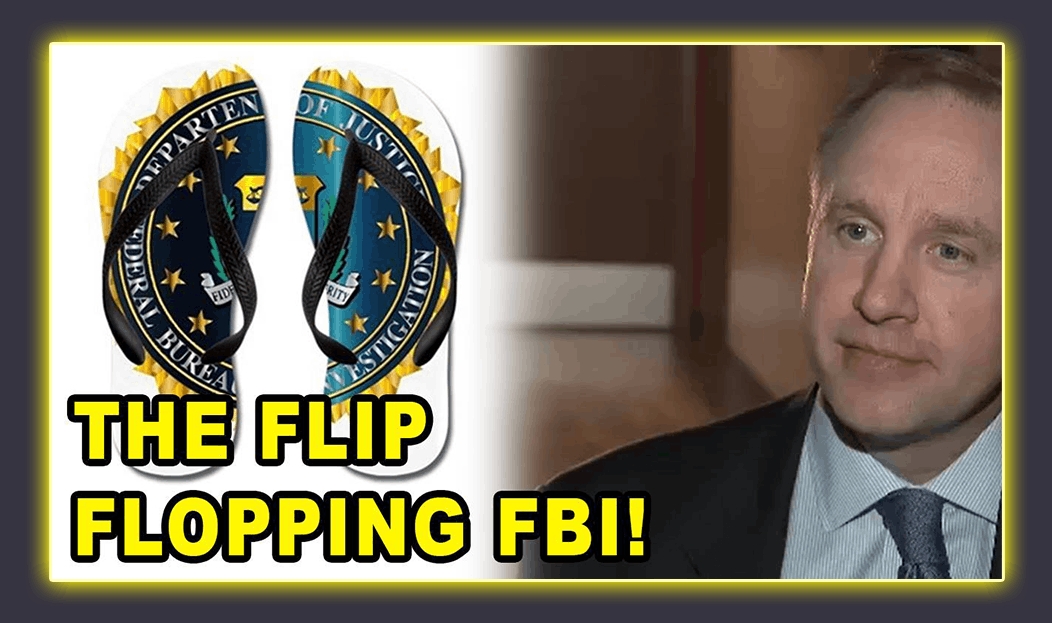 Hey, everybody, Jason Berma’s here reporting for WeAreChange.org. Unfortunately, we are going to have to continue talking about the mass shooting in Las Vegas because the Police Department and the FBI are lying to the public.

Let me first state that my sympathies go out to sheriff Lombardo. It is clear that the FBI is handling the dissemination of information through their special agent Aaron Rouse. Mr. Rouse seems to be in control of what the public gets to find out about this investigation. While FBI special agent Aaron Rouse appears to be in charge he hasn’t spoken much at these press conferences. He is usually working over Sheriff Lombardo or his assistant. He has come out and said two major things in these press conferences.

First, he has asked people with information about the event not to go to the media but to come to the FBI. This seems to be a means of controlling information.

“We’re starting at an information campaign, seeking true knowledge as to what happened in the events leading up to and involving this incident. The billboards will be displayed throughout the Las Vegas area. It will have the badge of the Metropolitan Police and the seal the FBI on it along with the terms ‘if you know something say something’ along with the phone number which we’ve agreed will be 1-800-CALL-FBI. This is critical for us.” – FBI Special Agent Rouse

He has also stated that we should trust the FBI so that they can get it right. This despite the fact that they continue to feed us disinformation. “We cannot give in to conjecture. We cannot respond to every little Twitter feed that may indicate a theory. We need to focus on the facts, you need us to be right, you expect us to be right, and we want to be right. The fundamental trust of the American people in the FBI is based upon our discretion. This is about informing on an investigation this is about resolving an investigation. So specifics regarding any individual contact cannot be answered. You need us, you trust us in the way we have that trust is by using good discretion about what we share.” – FBI Special Agent Rouse

Let’s get into the proven lies now earlier this week they were forced to change their timeline and admit that Jesus Campos a security guard engaged whoever the mass shooter was six minutes before the attack. This raises some very very large questions,

“Last week we talked about the single person whose action helped pinpoint the location of the suspect. That was the Mandalay Bay security guard, Jesus Campos. As you might imagine Mr. Campos was not only injured when he was fired upon as he did his room check about the door alarm down the hall from the suspect’s room. But he was also extremely shaken up by what happened to him. He was able to confirm for us exactly what he heard and saw in the moments before he was shot.” 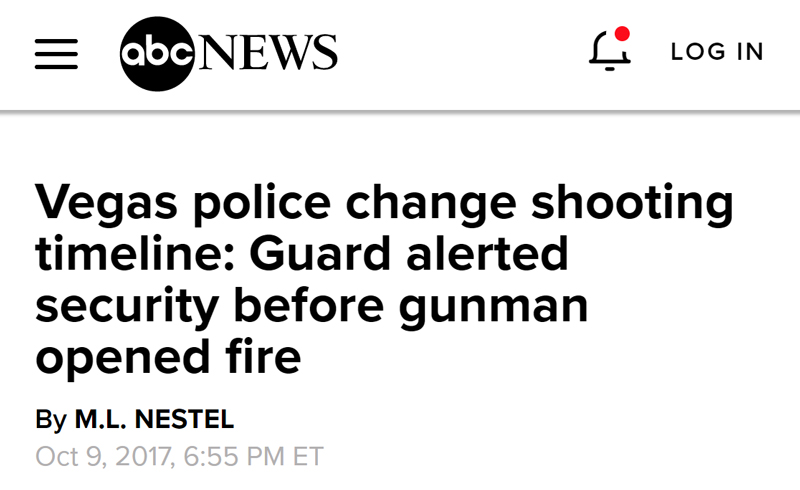 “No, I never there has never been anything out in a public forum about knocking. He was investigating an open door. He came because of a drilling sound. Bear with me while I get that for you. 21:59 that would be 9:59. I don’t know where you’re getting your numbers, but you are correct he was injured prior to the mass volley of shooting.” – Sheriff Lombardo

As far as the shooter engaging a security guard before the event, this information was almost leaked days prior by the assistant sheriff in Las Vegas. However, he corrects himself as he realizes he’s revealing too much. Initially, they stated that Jesus Campos engaged the shooter after shots had been fired on the ground. Which would make sense. Somebody up on that floor hearing shots coming from a room and then confronting that person. What is not clear now is how Campos engaged him a full six minutes prior. Why was he suspicious. Apparently, Campos was checking on a door alarm of a separate room. So how would he have even come across room 135 or any suspicious behavior taking place in that room? The police have also admitted that at least 200 rounds were fired through that door. If rounds were fired through that door six minutes before the shooting then why was the response time so lax.

Another thing that is extremely suspicious about the security guard angle is that initially, police thought that there was a shooter on the 29th floor and that someone had engaged in a firefight with security.

“We’re told that security is taking fire from a suspect on the 29th floor and that we had other officers that were identifying the suspect was in a room on the 32nd floor. So we’re thinking multiple shooters at this point.” – Sgt. Joshua Bitsko

This information dovetails with quotes from Bryan Hodge that were widely reported in the media. Mr. Hodge apparently had been checked into the room next to the shooter and coming up from the hall after dinner before and then when the shooting began. One of the quotes that are attributed to him is that a security officer had been shot and killed. The reason that we can’t tell whether this is true or not is that Mr. Hodge was also attributed with a quote saying that there were multiple shooters on multiple floors however he denied this himself on his own Facebook page only days after the attack.

There is another thing that we know that law enforcement has lied to us about. This was when Steven Paddock checked into the hotel. Originally they told us that he had been there since the 28th.

Then a receipt from his room on the 32nd-floor room 135 was leaked to the public. On this receipt, it is clear that there are two guests checked in and two dinners ordered. The police continue to lie about this despite the fact that they have admitted that he was checked in on the 25th. “That’s my recollection. We have information on the 25th. I had told you previously the 28th. We’re trying to confirm his actions between the 25th and the 28th. I’m under the belief that he was not occupying the room between those days.”

They are claiming that to their knowledge he wasn’t in that room until the 28th however the receipt clearly says the 27th. So we know that law enforcement continues to lie about this angle as well. Why? It’s also worth noting that the police have now said that they have gone through a massive amount of the video footage and followed Paddock throughout Las Vegas for days. If this is the case, they know full well when he checked into that room and who he was with in that room and at all times.

I’d like to point out that although this video showed no violence of the Las Vegas massacre, it will probably be demonetized anyway. Despite the fact that all of the major networks that have shown violence in their clips they continue to be sponsored financially by YouTube and others. This is a huge problem folks, and it amounts to censorship. That’s why we need you to share this video on social media and need you to subscribe and donate on WeAreChange.org.

Please, folks, get out there spread this information and as always thank you for watching.