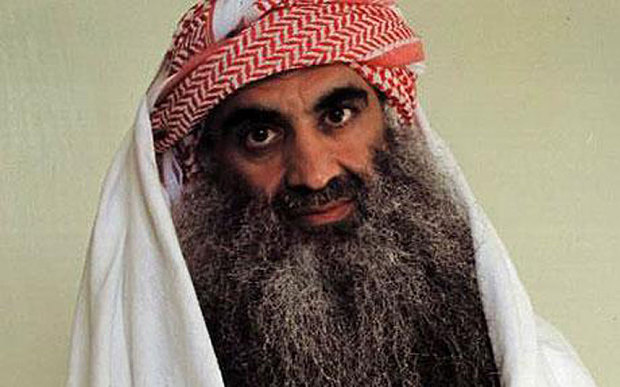 An al-Qaeda financier jailed for his role in funding the mastermind behind 9/11 is once again raising money for Islamist terrorists after being freed by the Qatari authorities, The Telegraph can disclose.

Khalifa Muhammad Turki al-Subaiy – a Qatari citizen who was said to have provided ‘financial support’ for Khalid Sheikh Mohammed – was jailed for terrorist offences in 2008 but released after only six months.

He is now accused of funding Islamist terrorists fighting in Syria and Iraq.

New documents released by the US Treasury disclose links between Al-Subaiy and a terror financier accused of bankrolling an al-Qaeda offshoot that plotted to blow up airliners using toothpaste tube bombs.

The American military thwarted the plot in an air strike on the group’s headquarters in Syria just over a week ago.

The case highlights growing concern over the apparent failure of Qatar, one of the richest nations in the world, to crack down on financial terrorist networks in the country.

Qatar has developed a close relationship with Britain in recent years, investing billions of pounds in the UK, including buying Harrods and building the Shard, the tallest building in Europe. The Gulf State has also secured in controversial circumstances the World Cup in 2022.

But prominent critics are now calling for greater scrutiny of Qatar’s connections to global terrorism with the threat of sanctions if it fails to tackle the problem.

Sir Malcolm Rifkind, the chair of Parliament’s Intelligence and Security Committee, has warned that Qatar “must choose their friends or live with the consequences” while Professor Anthony Glees, director of the University of Buckingham’s Centre for Security and Intelligence Studies, said: “The time has come to draw the line under funding by the Gulf States coming into the UK. It is well known that to find the terrorists you have to follow the money and at the moment it seems to be coming from Qatar.”

A new report to be published next month by a US security think tank is understood to have identified 20 Qataris as senior terrorist financiers and facilitators. Ten of those Qataris are already designated as terrorists on official US and UN blacklists.

Among them is al-Subaiy, 49, a Qatari Central Bank employee, who was blacklisted as a terrorist fundraiser as long ago as 2008 but still appears to be heavily involved in a terror network.

According to the official US report issued in 2008, al-Subaiy was identified as “a Qatar-based terrorist financier and facilitator who has provided financial support to, and acted on behalf of, al-Qaeda senior leadership, including senior al-Qaeda leader Khalid Sheikh Mohammed (KSM) prior to KSM’s capture in March 2003”.

Khalid Sheikh Mohammed has been named as the “principal architect of the 9/11 attacks” and is currently being held in Guantanamo Bay. He had lived freely in Qatar for a number of years in the 1990s despite being wanted even at that stage by the US for terror offences.

The US authorities also claim al-Subaiy provided “financial support to al-Qaeda senior leadership in Pakistan’s tribal region, and has also worked with senior al-Qaeda facilitators to move extremist recruits to al-Qaeda training camps in Pakistan. In addition, al-Subaiy has served as a diplomatic and communications conduit between al-Qaeda and third parties in the Middle East”.

Al-Subaiy was finally convicted in his absence in 2008 by a court in Bahrain “of financing terrorism, undergoing terrorism training and facilitating the travel others abroad to receive terrorist training, and for membership in a terrorist organization”. Two months later in March 2008, he was arrested in Qatar and jailed for those offences.

One diplomatic cable sent in May 2008 hinted at a dispute between the Qatari intelligence agencies and the country’s then all-powerful prime minister Hamad bin Jassim bin Jaber al Thani – known as HBJ for short – over the handling of the al-Subaiy case.

In the cable sent by the US’s then charge d’affaires Michael Ratney, ahead of a visit by Treasury Secretary Henry Paulson, he wrote: “HBJ was involved very early on, but to the consternation, we believe, of Qatar’s security agencies. If you raise the issue on this visit, it should be limited to thanking the Qataris for their cooperation on the case… We believe any more detailed discussion of the case should be done through the Qatari Attorney General and intelligence service, and not with HBJ.”

Al-Subaiy was released after six months in September 2009 and immediately added to a United Nations’ list of individuals subject to targeted sanctions because of their terrorist links.

Ashraf Muhammad Yusuf Uthman Abd al-Salam, who has been fighting in Syria since the beginning of the year, is alleged to have helped al-Subaiy to transfer of “hundreds of thousands of dollars” intended for al-Qaeda in Pakistan. Abd al-Salam is described by the Americans as a financial backer of al-Qaeda in Iraq and the al-Nusra Front, which is an al-Qaeda affiliated jihadi group operating in Syria.

The new documents also disclose al-Subaiy’s links to Abd al Malik Muhammad Yusuf Uthman Abd al Salam – also known as Umar al-Qatari. In 2011, according to the US, Umar al-Qatari sent tens of thousands of dollars to Muhsin al Fadhli, one of the key leaders in al Qaeda’s so-called “Khorasan group” in Syria. Fadhli, believed to be behind a plot to use bombs made from toothpaste tubes to blow up European and US passenger jets, was reportedly killed in an American bombing raid on Aleppo at the end of last month.

According to the latest US documents, Umar al-Qatari “has raised funds for al-Qaeda over the Internet and coordinated with ‘al-Qaeda financier’ Khalifa Muhammad Turki al Subaiy to transfer ‘tens of thousands of euros’ to al Qaeda and its senior leaders”.

Al-Qatari is currently detained in a jail in Lebanon after being arrested in 2012 prior to boarding a flight to Qatar while in possession of “thousands of dollars intended for al-Qaeda”.

The terror network extends to another Qatari national, also added to the blacklist last month by US government. Ibrahim Isa Hajji Muhammad al-Bakr, who also has close ties to Umar al-Qatari, was identified in 2006 as a key player in a terrorist cell plotting attacks on US military bases in Qatar. He had previously been jailed in Qatar in the early 2000s for funding terrorism but, according to the US, “was subsequently released from prison after he promised not to conduct terrorist activity in Qatar”.

The US claims he has since gone on to become a major fundraiser for both al-Qaeda and the Taliban and serves as a link between “Gulf-based al-Qaeda financiers and Afghanistan”.

The latest documents also disclosed that an unidentified financier, based in Qatar, had sent £1.25 million to Tariq al-Harzi, who is accused of being in charge of the Islamic State in Iraq and the Levant’s operation in helping foreign jihadis , including many Britons, to cross the border from Turkey into Syria.

Another senior Qatari – Abd al-Rahman bin Umayr al-Nuaymi – was designated as a terrorist in December last year by the US government. Al-Nuaymi was until recently an adviser to the Qatari government and a founding member of a charity linked to the royal family, the Sheikh Eid bin Mohammed al-Thani Trust. He is accused by the US of transferring £1.25 million a month to al-Qaida in Iraq.

Dr David Weinberg, a Senior Fellow at the Foundation for Defense of Democracies who recently testified on Qatari terror finance before the US Congress, said he was preparing a report which would name 20 Qataris with links to terror financing.

“The scope of Qatar-based terrorist fundraising is astonishing,” said Dr Weinberg, “According to current US officials, tiny Qatar has displaced its much bigger neighbour Saudi Arabia as the number one source of private donations to Isil and other violent extremists in Syria and Iraq.”

Dr Weinberg added: “Qatar has a long history of turning a blind eye to backers of al-Qaeda in its midst. Now the Qataris are repeating history all over again, refusing to arrest blacklisted terror financiers right under their noses. The known al-Qaeda funders whom they let out of jail have gone on to become some of terrorism’s top moneymen, boosting Isil, Khorasan, and other al-Qaeda linked groups.”

Dr Weinberg argued that al-Subaiy had received “a trivially short sentence” in 2006, adding: “This is a man who is on the United Nations terrorism blacklist that unambiguously obligates Qatar to take stronger action against him. These cases shock the conscience.”

Qatar’s transformation from tiny Gulf State to economic powerhouse has been engineered by a small clique of powerful men among the country’s ruling al-Thani family. Its change was presided over by Hamad bin Jassim bin Jaber al Thani – known as HBJ for short – who was its foreign minister from 1992 until 2013 while also holding the post of prime minister for six years from 2007 to 2013. Al-Thani also headed up the Qatar Investment Authority, the country’s sovereign wealth fund, which bought Harrods among a number of landmark deals.

One senior British academic, expert in Qatari affairs but who did not wish to be named, questioned how al-Thani could tackle extremism while also taking on so many other roles. “Al-Thani is a businessman. That is his politics. He is neither pro-this nor pro-that. He is pro-money,” said the academic, “But he is also a busy man and when you have to run the foreign policy, have prime ministerial duties and your own businesses, you could be harsh and wonder how effective he was.”

Sheikh Tamim bin Hamad Al-Thani, the Emir of Qatar, has defended his country against allegations of funding terrorism.

“We don’t fund extremists,” the Emir told CNN last week, “If you talk about certain movements, especially in Syria and Iraq, we all consider them terrorist movements.