The Hill is reporting that the Biden administration is “on alert” due to what it describes as Russia’s “saber rattling in Eastern Europe and the Arctic” – particularly following last week’s Russian troop build-up in Crimea and near Ukraine’s border.

“I think we’ve been very clear about the threats that we see from Russia across domains… We’re taking them very, very seriously,” Pentagon press secretary John Kirby had emphasized last week as the Ukraine crisis came back in Washington’s focus after Kiev charged Moscow with hostile maneuvers in Donbass.

US defense officials also cite a recent uptick in military flights near Alaska airspace as well as submarine activity in the Arctic – some of which we recently reviewed. On Monday, the Kremlin affirmed it is at the moment holding urgent dialogue with the United States. According a statement by Russian Deputy Foreign Minister Sergei Ryabkov, “Russia and the United States are in contact at the highest level over Ukraine.”

Recall that all of this, most especially events in Eastern Ukraine which witnessed the deaths of four Ukrainian Army soldiers on the Donetsk region, resulted in US European Command raising its alert status to its highest possible level last week.

It also resulted in a flurry of calls between US defense and administration officials and their Ukrainian counterparts, not to mention President Biden finally and belatedly holding his first ever phone call with Ukraine’s President Volodymyr Zelensky days ago where the two discussed the growing crisis.

The Hill reviews where things stand during the two months since Biden took office:

The Defense Department is overly observant of Russian activity after fighting resumed between Moscow-backed separatists and Ukrainian soldiers in eastern Ukraine, ending a cease-fire the two groups made last summer.

Twenty Ukrainian soldiers have been killed in the skirmishes since the start of 2021.

The two sides have been fighting since 2014 when Moscow seized and annexed Crimea from Ukraine, a conflict that Kyiv asserts has killed 14,000 people since its start.

In addition, in late March, three Russian nuclear ballistic missile submarines simultaneously broke through several feet of ice in the Arctic in a military drill, a maneuver that comes as the Kremlin has moved to raise its defenses in the Arctic.

??????EPIC: For the first time in history, during an exercise in the Arctic, three Russian nuclear submarines performed a simultaneous ascent from under the ice at a distance of up to 300 m from each other, the Commander-in-Chief of the Russian Navy, reported to Putin. #Russia pic.twitter.com/4iQCzGbGy5

Since 2015 Washington has sent a combined total of $2 billion in lethal assistance to Ukraine in order to stave of the “Russian threat”. Recently Biden has added to this $125 more in border security.

Rabobank comments of the growing crisis and posturing…

Meanwhile, as headlines continue to be written about Taiwan and worrying timetables, the large-scale, largely-unreported military build-up on the border between Ukraine and Russia still continues apace. Is this just very expensive military posturing? Is it a test of the resolve of the new White House? Or is it a harbinger of something far more serious that markets will soon need to worry about in a way they aren’t at present?

Don’t ask an economist for the answer! All I can add is that Russian military analyst Pavel Felgenhauer –who may just have a slightly better grasp of the inside story and logistics than a Wall Street FX trader– is quoted as saying that “the Western powers have no idea what to do in this situation“; that the clock is ticking; and that “at the beginning of May, everything will be ready” for a Russian military advance – if they want to make one. The analogy of ‘Wag the Dog’ can now be thrown in for those who wish to do so – or G K Chesterton and believing anything.

Talking of thrown in, however, EU High Representative Josep Borrell, who was recently humiliated in Moscow, just tweeted: “Talked to Ukraine Foreign Minister…Following with severe concern the Russian military activity surrounding Ukraine. Unwavering EU support for Ukraine sovereignty & territorial integrity” But what kind of support? The ECB’s firepower wouldn’t help at all if *actual firepower* is being used. If one were only focusing on the virus situation, it would already be a very worrying backdrop for the EU, which is suffering from a third wave and not enough vaccine, underlining its key structural weaknesses; but throw in the risk of a war nearby to deal with, and things look far worse. 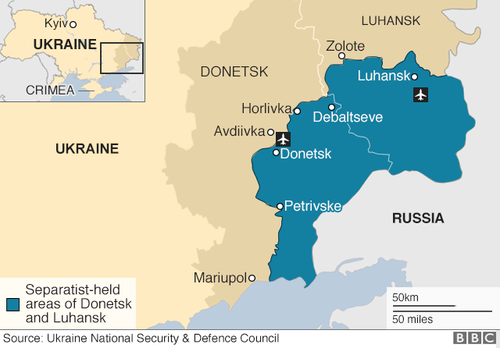 Days ago the White House said Biden “affirmed the United States’ unwavering support for Ukraine’s sovereignty and territorial integrity in the face of Russia’s ongoing aggression” in his phone call with Zelensky.