For those who paid attention to President Biden’s attempt at giving a speech on Friday, you may have noticed that the 79-year-old president has gone full Ron Burgandy – reading literally whatever is on the teleprompter, including “end of quote” and “repeat the line” – which were obviously cues for Biden’s ‘inside voice’ and not to be read.

The flubs led to mass ridicule over Biden’s senior moments…

Whoever controls the teleprompter is the real President! pic.twitter.com/1rcqmwLe9S

Which earned Simons a nice ratio…

And then she doubled down…

Self retweeting the ratio is a whole new level of misuse of the internet pic.twitter.com/JlqpB7zVFh

In response, digital strategist Greg Price slows down the clip to emphasize her lie.

It’s even funnier when you realize Biden literally did not say what his comms staffer is telling you he said.pic.twitter.com/PFC6wTY4n5 https://t.co/9FzzuXcQYY

Oh wow you were Adam Schiff's comms director before this?!?! You literally get paid to lie for a living.

Is the Russian collusion still hiding in plain sight?

Even if he did say "let me repeat that line" (which he didn't), he did not go on to repeat the line.

Even if he did say "let me repeat that line" (which he didn't), he did not go on to repeat the line.

Remember when the media tried to gaslight us into believing Biden was totally, completely, absolutely supposed to say “end of quote” out loud? https://t.co/EDr6FCFXGz 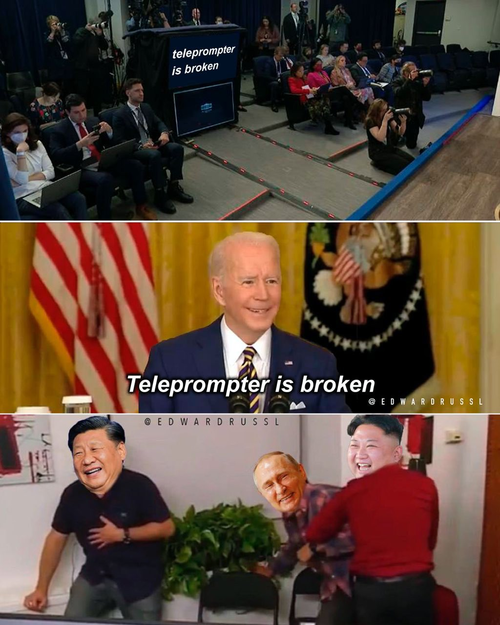 Then there was this gem:

Joe Biden claims that the assassination of Former Prime Minister of Japan Shinzo Abe is "is the first use of a weapon to murder someone in in Japan." pic.twitter.com/YOHWTv90K0

Jean-Pierre: "Sir you're being rude"