Bird Flu Outbreak “Above and Beyond Rate of Spread” Observed in Past, Warns Industry Expert

The bird flu outbreak has only been spreading around the US for two months, and some industry experts are warning the rate of spread could be worse than the devastating 2015 outbreak.

On Friday, the US Department of Agriculture (USDA) announced yet another state where the contagious strain of highly pathogenic avian influenza has been detected. Idaho is the 27th state where the virus has been found since February.

WaPo spoke to Gro Intelligence (ag data experts) senior research analyst Grady Ferguson who tracked the last outbreak in 2015, saying this one could be more disruptive to the poultry and egg markets.

Ferguson said that 66 days into the outbreak, 1.3% of all US chickens had been affected, and 6% of the US turkey flock. In 2015, he said, only .02% of total chickens were affected at this same time. The number rose to 2.5% of chickens infected at the outbreak’s peak, and more than 50 million were culled.

So far, the bird flu tsunami wave across 27 states has infected 27 million chickens and turkeys, forcing farmers to “depopulate” or cull flocks to prevent spreading.

“Last time, 81 percent of the cases were in the fourth and fifth month, as things exploded. What chicken egg prices did last time affected the market for years. We are two months into the outbreak now, and the safety protocols haven’t worked. I don’t want to be a Chicken Little, but I think it’s going to be worse than last time,” he said.

National egg prices are off the charts for this time of year. The average retail cost for a dozen large eggs across the country has jumped to nearly $3, up from $1.20 in early January. 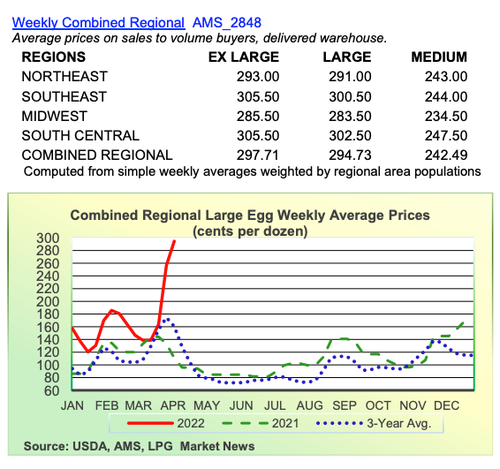 Ferguson warned soaring egg prices “will make higher prices for all baked goods and a wide variety of processed foods from cupcakes to salad dressing. Restaurants will have a harder time justifying why they should give you a three-egg omelet for a dollar. And on the chicken meat side, the situation is also worse than it was last time.”

The emerging poultry crisis will feed into record-high food inflation that will continue decimating households’ budgets.