It’s not as if oil – the best performing class of 2021 – behind bitcoin of course – needed any more reasons to surge higher (for the latest tally please read “Saudis + Commodity Funds = Energy Stock Explosion“), but it got it moments ago when Saudi Arabia said that it had intercepted missiles and a barrage of drones launched from neighboring Yemen and which targeted Dhahran, where Saudi Aramco, the world’s biggest oil company, is headquartered, which eyewitnesses said was rocked by an explosion.

According to Bloomberg which quotes witnesses on the ground, the blast shook windows in Dhahran, which hosts a large compound for Aramco employees. 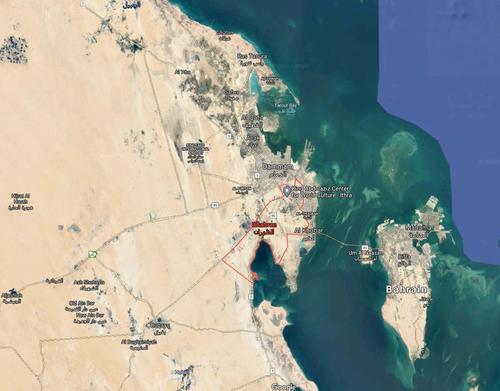 While Bloomberg was cautious with reporting of what had happened, Saudi journalist Ahmed al Omaran who previously worked with the FT, said that “Saudi oil tanks in Ras Tanura Port hit in drone attack and Aramco facilities targeted with ballistic missile” quoting an energy ministry statement.”

An official spokesman at the Ministry of Energy said that “one of the petroleum tank farms at the Ras Tanura Port in the Eastern Region, one of the largest oil shipping ports in the world, was attacked this morning by a drone, coming from the sea.”

Yemen’s Houthis claimed a series of attacks on Sunday including on a Saudi Aramco facility at Ras Tanura in the east of the kingdom. The group launched eight ballistic missiles and 14 bomb-laden drones at Saudi Arabia, a spokesman for the Houthis, Yahya Saree, said in a statement to Houthi-run Al Masirah television.

“There are reports of possible missile attacks and explosions this evening, March 7, in the tri-city area of Dhahran, Dammam, and Khobar in Saudi Arabia’s Eastern Province,” the U.S. consulate general in Dhahran said in a statement.

According to a statement from a spokesman at the Saudi Energy ministry, “the attacks did not result in any injury or loss of life or property.” In his statement, the spokesman stressed that “the Kingdom condemns and criminalizes such repeated acts of sabotage and hostility. The Kingdom calls on nations and organizations of the world to stand together against these attacks, which are aimed at civilian objects and vital installations.”

The Houthis have stepped up assaults on Saudi Arabia and last week claimed it hit a Saudi Aramco fuel depot in Jeddah with a cruise missile. It wasn’t clear how much damage had been caused. While such assaults rarely result in extensive damage, their frequency has created unease in the Gulf, a region key to global oil production.

Earlier on Sunday the Saudi-led coalition said the Iran-backed Houthis had fired projectiles at the kingdom and said a U.S. decision to revoke their terrorist designation had fueled rising attacks. It said had carried out retaliatory air strikes on Yemen’s capital, Sana’a, targeting the Houthis it has been battling for six years.

Needless to say, ignore the diplomatic BS, and keep in mind that everything the Houthis do when it comes to “attacks” on Saudi territory and especially Aramco facilities is known well in advance by Riyadh.

And since today’s attack will likely send Brent surging once it reopens for trade in a few hours, our only observation on the matter is that shortly after shocking the world by extending production limits in last week’s OPEC+ meeting, it now appears that Saudi Arabia is indeed hell bent on getting the black gold to hit triple digits as fast as possible…

… especially since Saudi Arabia knows mothballed US shale production will take months if not longer to get back online and renew downward pressure on oil prices.