Update (1015ET): The New York Times has confirmed (with its sources) that the CDC is expected to recommend on Tuesday that people vaccinated for the coronavirus resume wearing masks indoors under certain circumstances, reversing a decision made just two months ago.

As recently as last week, an agency spokesman said that the C.D.C. had no plans to change its guidance, unless there were a significant change in the science. The CDC plans to provide a media update on the pandemic at 3pmET.

Based on what scientists are learning about the Delta’s variant’s ability to cause breakthrough infections, she said, “this is a move in the right direction.”

Well, we are happy someone is pleased that the nation is taking a step back towards Einsteinian insanity.

Maybe this time it will work? 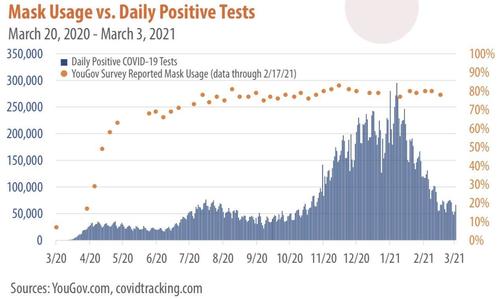 Cases in Thailand are up 696,400% since National Geographic said that they had done an amazing job preventing COVID from “gaining a foothold” due to a commitment to masking & public health

Nailed it again, The Science™! pic.twitter.com/0DgUfZ0SWG 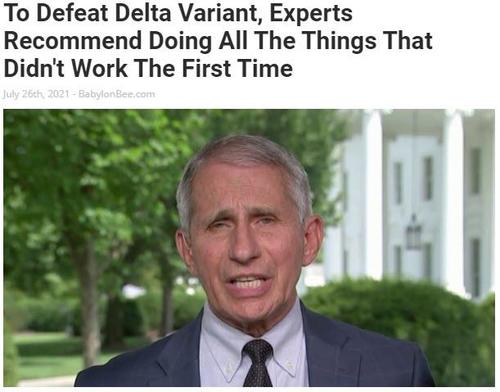 Despite Dr. Anthony Fauci’s claim that the federal government wouldn’t adopt any new confusing and unscientific mask or vaccine guidance, CNN reports that federal officials are preparing to announce new nation-wide masking guidance after NYC and California ordered public workers to either provide proof of their vaccination status or mask up, while LA has ordered people to wear masks in public once again. According to CNN, the decision is “imminent”, and could arrive as soon as Tuesday.

What’s more, as the delta variant continues to spread, a drop in new cases seen in the UK and Europe may be signaling a coming “inflection point” in the US.

Alex Berenson pointed to the trend on Twitter on Tuesday.

You know what doesn’t get the credit? Give you a hint, it’s what you’ll try to give the credit. https://t.co/pVoXuBu9pv

Yet, despite this, CNN says top US health officials gathered Sunday night to review the new data and evidence on delta’s transmissibility. An announcement could land as soon as Tuesday, while others told CNN that it likely won’t arrive until later in the week.

This isn’t the first hint we have received about a possible revision: Dr. Fauci clarified on Sunday that updating mask guidance is under “active consideration.” Dr. Fauci also warned that the US government is going in “the wrong direction” as the number of new COVID cases remains stubbornly high.

Last time the CDC updated its mask guidance was two months ago when they first said people could go without masks outdoors and inside if they have been fully vaccinated. Since then, people have been working out at gyms without masks in most of the US. A reversal of these types of privilege would almost certainly outrage all those adults who got the vaccine solely so they could avoid the restrictions.

As more super-liberal cities and states adopt what he described as “unscientific” regulations, Fox News’ Sean Hannity slammed Dems for breaking their promise that the vaccine would mean individuals no longer need to wear masks in public or take other precautions

“The mask-obsessed ‘Left’ isn’t following the science…and they’re trying to blame conservatives for it,” Hannity said. Berenson has also ridiculed certain local officials for their almost mystical justifications of the mask guidance.

2) I believe in magic

3) I work for the Atlantic

Meanwhile, the White House told CNN that it would be “up to the CDC” to change regulations and guidance surrounding mask use.

Earlier this month, LA County adopted new mandatory masking requirements calling for masks to be worn when in public (despite President Biden’s claim that “you can’t get COVID” if you’ve been vaccinated).

PRES. BIDEN: "You're not gonna get COVID if you have these vaccinations." pic.twitter.com/5x1xfQryIX

That is, unless you’re in Israel.