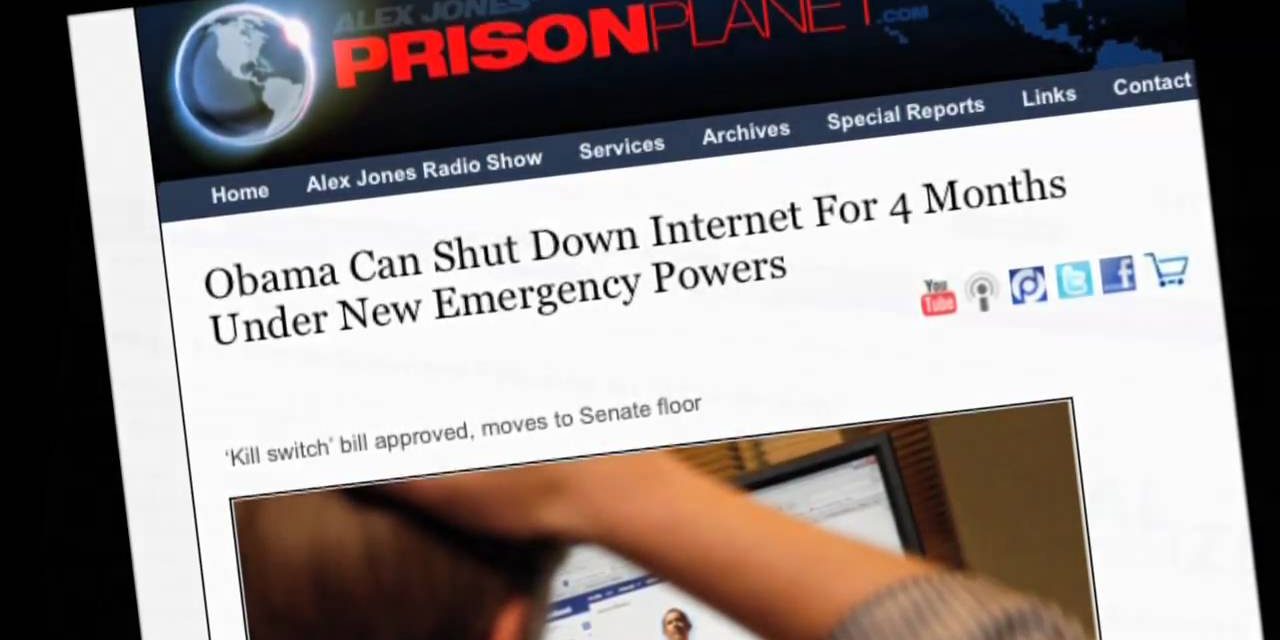 Made to look like a hack, Thought Police Block Mega-Viral Anti-Establishment Documentary After More than a Year of Dominating Viewcounts, Ranking #1 in Search Engines and Waking Up Millions to the False Left-Right Paradigm Perpetuated by Obama Alex Jones is on high-alert after someone managed to compromise the“ChangeDaChannel” You Tube account and criminally remove the most-viewed version of “The Obama Deception” available online, which had more than 6.5 million views and whose URL link ranked among the top of all “Obama” related searches.

The channel’s owner was tipped-off about the breach, and was subsequently able to change the password and prevent further deletions of Alex Jones and other patriot documentaries. Both he and members of the Infowars staff believe the video could have only been pulled from behind the scenes at Google or by a government-level cybersecurity admin with access to YouTube records, as the passwords were carefully guarded and unlikely to be guessed at.

The film, which has been attacked before, was censored at a critical time. Just one day before on Friday’s broadcast, Alex challenged activists to drive “Obama Deception” up in the search engines. Only a few hours later, Google trends rankings revealed that it was the #1 search term, above Lindsay Lohan, the BP Oil Spill or the death of George Steinbrenner. What’s more, the viewcount grew by nearly 100,000 in that same single day, demonstrating the accelerated attention the film has been receiving. Further, as a result of topping the online trends charts, dozens of fresh reviews in online papers and blogs were published, including Blue Star Chronicles, Mahoo News and Live Street Journal.

“This was a criminal act, and You Tube needs to investigate, track the IP and find out who did it,” Alex Jones said. “The Obama Deception was getting more and more popular, and the establishment doesn’t like the fact that it exposes the Left-Right paradigm and identifies Obama as a puppet,” he added.

Fighting back against the censorship of The Obama Deception and other patriot works is in your hands. Already, your hard work to promote and propagate this information has resulted in tremendous success. You are equally capable of responding to this negative act with a positive outpouring of numbers in the way of spreading the video, searching for the term and a million other ways of promoting the truth out there. Once again, it is up to you.

The Obama Deception has drawn fierce attacks since its release in March 2009– not only strong words attempting to discredit the powerful information the film puts forward, but in attempts to limit and block the film online. Nevertheless, an estimated 25 million have seen the film worldwide, thanks to hundreds of online versions and DVDs handed out by dedicated activists.

Even so, Google merchant and other shopping carts have blocked its sale after labeling the film as “anti,” “hate” or otherwise “inappropriate.” Before the film was even released, FBI officials asked suspiciously about the film during a visit to Alex’s office, where they attempted to gather information about the documentary, office employees and other information. Earlier in the film’s release, YouTube was caught fudging the viewcount and other statistics for the film. This past week, Alex Jones’ Facebook was blocked for displaying a “Gadsden flag”– a key icon of the Revolutionary War–which drew ire. The Obama Deception was taken down only a few months ago after a false copyright complaint blocked it for several weeks, but was later restored. Even a “Christian” version of YouTube has censored an upload of the film.

Images of President Obama as “the Joker” created a stir last year as well– and it was clear from interference that free speech did not apply to those holding signs with the image at rallies or putting up posters around town or on social networking sites.

A cadre of White House Intelligensia as well as a new breed of “Cyber Security” at the Pentagon have taken it upon themselves to regulate the Internet, conform “free speech” to their gated-and-streamlined Internet 2 model and “offensively” take on offending web entities. This action has been boldly led by the likes of Senator Jay Rockefeller, who in support of cyber security bill, stated that it might have been “better if we’d never invented the Internet.” More dramatically, Joe Lieberman and others have called for Chinese-style censorship and enabling a “kill switch” at the behest of President Obama or his successors.

Further, a literal information war has been declared in the online space, a veritable frontier battleground for freedom in the 21st Century virtual world. CENTCOM announced its intention to “engage bloggers” and counter errors or “disinformation.” The Air Force has a similar operation, as does the Pentagon.

Likewise, Obama’s Information “Czar” Cass Sunstein outlined a report for the Journal of Political Philosophy recommending engagement on the part of the government to infiltrate conspiracy groups in order to undermine them via postings on chat rooms and social networks sites. Even more outrageously, he has envisioned a scheme to censor conspiracy theories or tax those who disseminate them. Supreme Court nominee Elena Kagan has also advocatedregulating political speech and even banning books.

The flag@whitehouse.gov program even asked supporters to identify “fishy” blogs or websites that might be promoting “disinformation” about health care or other aspects of the White House agenda. The same concept took place during the 2008 campaign where Missouri ran an add threatening to arrest critics who “told a lie” about Obama or promoted ‘disinformation’ such as claims that Obama was born in Kenya.

The web has become the most important public space for political discussion in the 21st Century, as has been very “democratic” in its access to blogs, alternative news, individual and even unpopular opinions, the promotion of ideas and candidates (regardless of budgets or notoriety), audio-visual and printed archives and other vital material that should be protected under Constitutional and democratic principles, but are instead being bullied.

Blocking information is not new, but will only accelerate in the realm of the 21st Century Internet. Opponents of freedom would like to silence widespread online dissent, and will only find justification for moving forward to shut it down and censor its content. The Constitution and Bill of Rights put in place strong protection for expression and personal belief, and a high-tolerance for free speech for a reason– especially when criticizing or questioning high officials and leaders.

OBAMA’S “CRISIS OF CONFIDENCE” IS ELECTION DILEMMA FOR DEMOCRATS

Cadres of angry Obama supporters have been attacking The Obama Deception since its released less than 2 months after Barack Obama’s inauguration. Despite attempts to label the film as “racist” or “anti-government,” The Obama Deception has reached many people, and unnerved the establishment so much, that Alex Jones reportedly made the supposedly leaked White House enemies list, proving that the film has undermined Obama’s effectiveness.

Instead of being able to easily ram-through legislation with the aid of Democratic majorities in BOTH houses, Obama has been forced to fight for issues that are simultaneously gaining in their unpopularity with the public daily. Carbon taxes, the bailout for bankers, health care legislation, amnesty for illegal aliens– alongside the collapsing ecomony– have driven massive fury. All these issues and more have been covered in Alex Jones’ controversial documentary since the dawn of the Obama Administration. The Fall of the Republic further expands that analyze and goes even deeper.

Top news pundits are now saying that the Democrats may likely lose control of not only the House, but the Senate as well in the November 2010 elections. Rahm Emanuel is fleeinghis Chief of Staff position; former Clinton Aides are speculating that only a terror attack like 9/11 or the Oklahoma City bombing save the Obama Administration, and bolster a political rescue from the angry uprising that has been unseating incumbents, supporters of Health Care and other unpopular legislation, but especially the Congressional Democrats.

With the upcoming midterm elections, the Obama White House is more desperate than ever to regain their credibility, silence those calling the Emperor “naked” and reign in the destruction of America to fit the schedule of his social-engineering masters.

SOLUTIONS: FIGHTING BACK FOR FREE SPEECH AND ON-LINE LIBERTY — A CALL TO ACTION!

As Paul Joseph Watson has recently observed, the lights are going out for free speech on the Internet. But the best defense against such strong attempts to censor and control the web, is to fight back with a full offensive. The same activists who’ve made The Obama Deception one of the most viewed online films of all time, and who’ve driven its name into the top of search trends can once again demonstrate to the powers to be that we are a force of significant numbers. Make it clear that we will never stop fighting and that we will see that this powerful film– and so many other activist tools– aren’t shut down, and instead are spread everywhere into the physical and virtual world.

Fight back against criminal sabotage and outright censorship:

– by spending 5 minutes or so every time you go online to send “The Obama Deception” or “Police State 4? or “Endgame” into the top of Google, Yahoo, Bing and StartPage’s search engines.

– by spreading other links to The Obama Deception to your friends, family, coworkers and everyone else you know. Spreading these links will, in turn, make them more dominant in search engine results, and help drive the trend as well

– by sending out the new upload of The Obama Deception on Change Da Channel, featuring a warning by Alex Jones about how dire the need is to spread the film and stop the Internet policing

-pass out DVDs, pamphlets and flyers in the physical world to people you encounter, and keeping physical and offline archives of vital information that can survive outside of the increasingly-regulated Internet

-wherever it seems relevant, let your Congressman, city representatives, etc know that you support a free Internet; urge them to vote against a “kill switch” and to carefully guard against “cyber security” that is really surveillance and censorship.

– Get The Obama Deception on DVD and make copies forevermore or download the film in high-quality on PrisonPlanet.tv and share it with your familiars.

Please continue to support Infowars.com and PrisonPlanet.com– we cannot do it without you.