China to Hold Military Drills in Gulf of Tonkin as Warning to Nearby U.S. Carrier Group

China has announced plans to hold military exercises in the South China Sea this week, a mere days after the Pentagon confirmed a US aircraft carrier group led by the USS Theodore Roosevelt had entered the disputed waters in a “freedom of the seas” operation and after daily Chinese incursions of Taiwan’s airspace had been reported the prior week.

Beijing, indignant at the US muscle-flexing in its own backyard, will hold the drills in the Gulf of Tonkin also during a crucial week top Communist Party leaders of Vietnam are meeting for the once in five years National Congress to select a new leader for the country.

Reuters reports of the new Chinese military drills, “A notice issued by the country’s Maritime Safety Administration prohibited entry into a portion of waters in the Gulf of Tonkin to the west of the Leizhou peninsula in southwestern China from Jan. 27 to Jan. 30, but it did not offer details on when the drills would take place or at what scale.”

The new drill notification came after on Monday Chinese Foreign Ministry Spokesperson Zhao Lijian slammed the nearby US military movements:

“It does no good to regional peace and stability for the United States to frequently send military vessels and aircraft to the South China Sea to show off muscles,” Zhao said.

Meanwhile, over the past week Taiwan has on multiple occasions scrambled jets to warn off Chinese aerial provocations, including over the weekend multiple Chinese bombers being sent in a flyover. 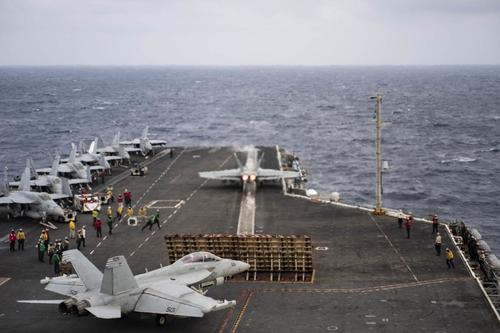 As we noted earlier, with fighter jets from both countries now on the verge of engaging above Taiwan’s ADIZ, we are one false flag “accidental” missile discharge from all out war.

China for its part sees such actions as aimed at defending the country’s sovereignty and designed to act as a warning against “collusion” between the United States and Taiwan.

The presence of the USS Roosevelt carrier in the area most certainly complicates things further, inching the two sides closer to direct military conflict.