“Get ready for war!” read a message posted by China’s People’s Liberation Army (PLA) 80th Group over the US visit to Taiwan, as reported on Friday, July 29. China’s Army’s war message over the potential US visit to Taiwan reportedly generated over 300,000 thumbs-up in just 12 hours, creating “high morale among Chinese soldiers” according to Global Times. 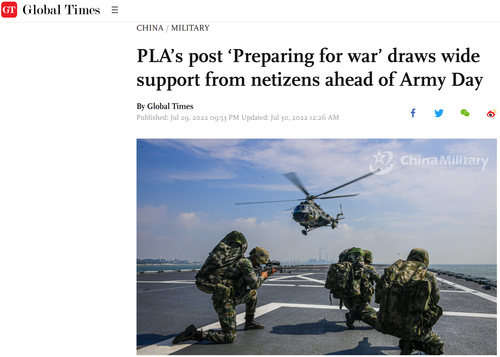 Below: reportedly the message in question appearing on a PLA channel Friday on the popular Chinese social media app Weibo:

“Preparing for War(????”
The official #Weibo account of the 80th Army Group of the #CCP' People's Liberation Army #PLA posted this two-Chinese-word post 15 hours ago and has gained 650K likes, 32K comments, and 28K shares so far. pic.twitter.com/voEJ3BHFn6

I'd rather translate it as preparing for war. ?means prepare, get ready for, ? means war. Of course, it can also mean action. But this is an account of PLA.

GT further reminds its audience that, possibly corresponding with a Pelosi Taiwan visit (assuming she goes through with it), the country will celebrate the 95th anniversary of China’s People’s Liberation Army (PLA) military…

The 80th Group Army posted a comment saying, “we must bear in mind the fundamental responsibility of preparing for war and charge on the journey of a strong army.” The comment has received 8,000 thumbs-up.

…Ahead of the 95th anniversary of the founding of the PLA on August 1, Xi, also the general secretary of the Communist Party of China (CPC) Central Committee and chairman of the Central Military Commission, stressed the need for further implementing the strategy of strengthening the armed forces by training competent personnel in the new era, the Xinhua News Agency reported on Friday.

At the same time, prominent GT pundit and the publication’s former editor, Hu Xijin, has claimed the Chinese military “has the right” to block Pelosi’s plane and any US fighter jet escorts from Taiwan’s airspace (which China claims as its own).

This after he has in past days reported that Beijing considers “all options, including military ones” to be on the table:

China’s jingoistic statements echoing from government-affiliated media and commentators has gotten considerable attention of late from American observers as the West speculates on what kind of response Beijing is readying in the scenario that Pelosi actually touches down in Taipei, which could be just days away.

In the last week, the running-dog of the Chinese propaganda effort @HuXijin_GT has ‘officially’ threatened the U.S. with war at least 6 times from behind the Great Firewall of the Communist Party of China. I need to call @RayDalio and Schwarzman to better understand how our 1/6 https://t.co/0aVEgjvg62

But there is a general feeling that if China does respond aggressively – beyond something like just the usual war drills (snap exercises are occurring now in the South China Sea) – there’s little that Washington can do about it, given it would involve simultaneously “confronting” superpowers on two major fronts, considering the spiraling Ukraine situation.

The only place where the US wins a war against China is in the feverish imaginations of State Department planners, neocon ideologues and Washington Post columnists. The rest of the world is aghast at the thought of hot war between superpowers.

Update(10:22ET): With House Speaker Nancy Pelosi departing for a tour of Asia on Friday – to include Japan, South Korea, Malaysia, and Singapore – The Washington Post’s Josh Rogin says a Taiwan stopover is “expected to happen” during the “early part” of the trip.

Could Pelosi show up in Taipei as soon as Sunday, Monday or Tuesday? Meanwhile, Chinese state media has been busy threatening that “military options” are on the table in response.

Diplomatic sources tell me Speaker Pelosi's visit to Taiwan next week is expected to happen, in the early part of her Asia tour. Pelosi's office says trip possible, but not confirmed.

A social media post by the PLA Army which said “Preparing for war” generated over 300,000 thumbs-up in 12 hours, amid high morale among Chinese soldiers ahead of the 95th anniv. of the founding of the #PLA and escalating tensions across #Taiwan Straits. https://t.co/efqunrYp1c

As AntiWar.com’s Dave DeCamp wrote: House Speaker Nancy Pelosi (D-CA) is leading a congressional delegation to Asia that is set to depart on Friday, but it’s still not clear if she will make a stop in Taiwan.

Sources told NBC News that the delegation will stop in Japan, South Korea, Malaysia, and Singapore. Taiwan is listed on the itinerary as “tentative.”

So far, Pelosi and her advisers have declined to confirm that she is planning to visit Taiwan. But on Wednesday, Rep. Michael McCaul (R-TX) said that Pelosi invited him to join her in Taiwan, signaling that she still plans to go despite the risk of sparking a major crisis across the Taiwan Strait.

McCaul declined the invitation, and it’s not clear who will be part of Pelosi’s delegation. She also invited Reps. Gregory Meeks (D-NY) and Mark Takano (D-CA), but they haven’t commented on the trip.

Beijing has issued strong warnings over Pelosi’s plans to visit Taiwan, but the potential trip has gained strong bipartisan support from lawmakers in Congress as both Republicans and Democrats are urging her to go.

#Opinion: China's remarks on countering #Pelosi's possible visit to #Taiwan shows highest level of warning. All options, including military ones, are already on the table. It's crucial to accurately understand China's remarks and avoid misunderstandings. https://t.co/hsXmXPz8LB

Biden administration officials have said China will view the trip as a purposeful provocation but maintain that it’s her decision whether or not to visit the island.

During a Q&A following Thursday’s Biden-Xi phone call, a senior administration official reiterated, “I’d note that, you know, no trip has been announced.  And as we’ve said previously, it’s her decision.”

Chinese military analysts have warned that Pelosi visiting Taiwan could spark a conflict between the US and China. Pelosi will be the first house speaker to make the trip since Newt Gingrich did in 1997, but the analysts warn China’s response could be stronger since its military is much stronger today.

Whether Biden keeps his words, the touchstone will be whether he can prevent Pelosi’s visit to Taiwan. If Pelosi eventually makes the trip, to China, it will be a joint show between the White House and the Capitol Hill. I believe the PLA air force will definitely take action then https://t.co/2OmPoZlRYu

Chinese state pundits and media are meanwhile warning that “all options, including military ones” are currently on the table.