As we reported last night the US Justice Department revealed on Wednesday that two Twitter employees spied on users on behalf of Saudi Arabia. This after the Washington Post reported that two employees working for the company in 2015 accessed the private information of more than 6,000 Twitter accounts.

At least one of the accounts accessed could be related to the murder of journalist Jamal Khashoggi, given it belongs Saudi dissident Omar Abdulaziz, well-known to have been a close friend and confidant of Khashoggi. This means it’s likely the Saudi Twitter spies used the platform to gain information related to the hit, given they were with the US social media giant for years prior to the Oct. 2, 2018 murder.

The UN and the CIA believe the Jamal Khashoggi hit at the Saudi consulate were on orders going straight to the top, and months ago produced reports pointing the finger at crown prince Mohammed bin Salman (MbS).

As the Post reported, the case marks “first time federal prosecutors have publicly accused the kingdom of running agents in the United States,” and further it “highlights the issue of foreign powers exploiting American social media platforms to identify critics and suppress their voices.”

US Attorney David L. Anderson was quoted as saying, “The criminal complaint unsealed today alleges that Saudi agents mined Twitter’s internal systems for personal information about known Saudi critics and thousands of other Twitter users.” They were reportedly paid in cash and jewelry via Saudi sources, including at least $300,000 for their work, and expensive watches worth $20,000 each.

The two former Twitter employees, identified as Ahmad Abouammo and Ali Alzabarah – the former arrested in Seattle and the latter believed to have fled US soil – along with their alleged Saudi intelligence ‘handler’ Ahmed Almutairi, who was identified as serving as the intermediary between Saudi Arabia and the Twitter staff, were no doubt central to the broader MbS campaign to muzzle critics and activists overseas. 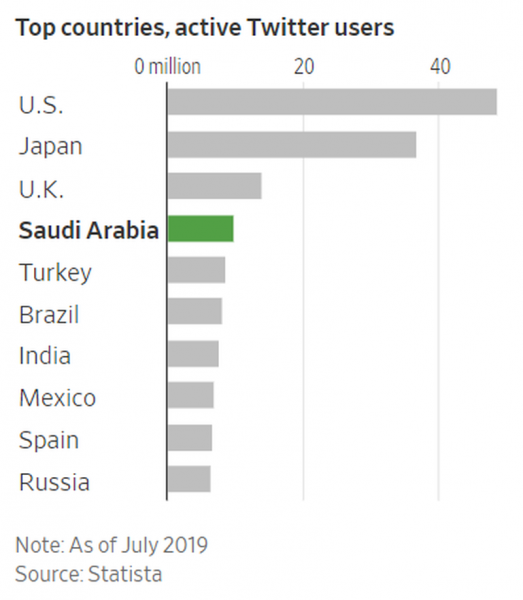 The WSJ in a new report also highlighted the Khashoggi murder connection related to the outing of the two Twitter spies:

Social-media researchers had previously acknowledged Saudi manipulation of Twitter, but the breadth and control of messaging became more widely known last year following the Saudi journalist’s murder. Researchers have noted a disinformation campaign that attempted to distance the kingdom from the killing and discredit Qatari and Turkish media reporting on the murder.

In response to the arrests, Twitter issued an official statement claiming it has a policy of restricting access to the most sensitive account information “to a limited group of trained and vetted employees”. However, is anyone going to buy this after such a high profile outing of foreign spies at the social media giant?

A Twitter spokeswoman further pledged to enforce “platform manipulation policies globally.” This after one of the former top Riyadh officials accused by the United States of orchestrating Khoshoggi’s death, Saud al-Qahtani, is also believed to have previously been central in spearheading the kingdom’s global social media intimidation campaign aimed at Saudi dissidents and MbS critics.

.@hrw researcher @cooglea says there were "massive shifts" in the Saudi security apparatus after Crown Prince Mohammed bin Salman came to power in 2017. "We immediately saw a rapid escalation in the level of repression in Saudi Arabia." pic.twitter.com/aIzv4g5RMz

Though the one-time close MbS confidant who was at the forefront of the “intimidation campaign” has not been named as directly involved in overseeing the Twitter spies from the kingdom, it’s likely that he had prior involvement.

The WSJ summarized the federal government’s case against the employees as follows:

In a complaint filed in federal court Wednesday in San Francisco, federal prosecutors accused two former Twitter employees and a Saudi Arabian national of acting as illegal agents of a foreign government. One of the former Twitter employees, Ahmad Abouammo, was arrested in Seattle on Tuesday and is accused of trying to obtain personal information about Saudi Arabia’s critics, U.S. authorities said.

This included the spies using their access to gain “email addresses, dates of birth and other information about people who had published posts critical of the Saudi royal family, prosecutors said.”

Meanwhile, a mere day after the revelation of the Saudi spies embedded deep within one of the world’s largest US-based social media platforms hit headlines, guess who is in Riyadh on Thursday meeting with “our partners” the Saudis?

Curiously, MbS is not seen in the photo op meeting with CIA Director Haspel, likely as part of the continued embarrassing fallout related to the Khashoggi murder.

But still we doubt the meeting was anything less than cordial and all smiles, and we don’t expect that Haspel brought too much pressure to bear as they discussed “the longstanding Saudi-US partnership” — even after the Saudis were caught red-handed this week.

As Reuters noted late in the day Thursday, Riyadh has so far remained silent on the charges. The CIA has also declined to comment.

Likely the only information that will come out on the Haspel-Salman closed door meeting will be limited to the SPA press release saying the two discussed “a number of topics of mutual interest”.