Update (2023ET): CNN journos doing damage control after the network’s Natasha Bertrand panicked and deleted tweets containing harsh comments reportedly made by President Biden to Ukrainian President Volodomyr Zelensky – namely that a Russian invasion was “imminent,” that the Capital city of Kyiv could be “sacked,” and to “prepare for impact.”

Now – none of that apparently happened according to CNN‘s Jim Sciutto, the White House, and apparently Ukraine itself. Of note, CNN claims their source was a “senior Ukrainian official.”

Hi @NatashaBertrand! Why did you delete this? pic.twitter.com/rNKNCLhIZr

The American people deserve the truth

BREAKING: We have recovered the Ukraine call report that @JakeTapper and CNN just deleted

Please DO NOT RT this as they do not want anyone to see it! pic.twitter.com/vV67Jc1p7i

And the White House disputes:

At 6:11pm, one hour after CNN's @NatashaBertrand deleted the war report, CNN's @JimSciutto a mouthpiece for the IC is dutifully posting attacks on the report she had posted at 4:59pm

What happened at CNN in the hour and 12 minutes in between? pic.twitter.com/Opq6Isx6fz

We also see a tweet from Emily Horne, a Biden official, which is a brief denial, but does not include the the specific details of Sciuttio's tweet

That means the White House was working the phones to CNN https://t.co/6z8BEW3SBI

Zelensky’s spokesperson about the call with Joe Biden: “Some reports regarding the content of the talks between Presidents Volodymyr Zelensky and Joe Biden have appeared on social media, citing the alleged ‘senior Ukrainian official’. These messages are completely false”. pic.twitter.com/Z3blRfCjw2

This is where we're at on the Ukraine call leak 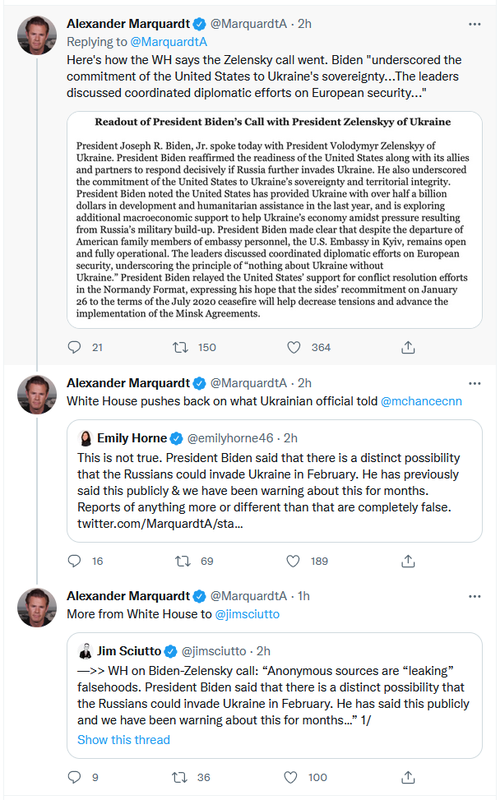 In their Thursday afternoon phone call which the White House called “a check-in”, it seems President Joe Biden took the opportunity to continue with an alarmist posture as he told his Ukrainian counterpart Volodymyr Zelenskiy that a Russian invasion is “now highly certain” – according to CNN.

Further, “President Biden reaffirmed the readiness of the United States along with its allies and partners to respond decisively if Russia further invades Ukraine,” according to the White House call readout. But it remains that two conflicting narratives have emerged, given just prior to the call it was being reported that Zelensky was expected to request that the US be more cautious in its messaging surrounding a potential Russian attack, per source–particularly the word “imminent,” as it risks causing panic and negative economic consequences for Ukraine. That was also according to CNN.

For anyone wishing to understand the mass media fake war rhetoric, you can see here how information is being manipulated: So today Biden and Zelensky had a call, look how CNN reported the news and the conversation content, the second one is the tweet of Zelensky about it#Ukraine pic.twitter.com/5ptTRNVLcN

“Discussed recent diplomatic efforts on de-escalation and agreed on joint actions for the future,” Zelenskiy said in a tweet. “Thanked President Joe Biden for the ongoing military assistance,” he said, also affirming that the US offered further financial support to Ukraine, which was highlighted in the Biden statement.

Had a long phone conversation with @POTUS. Discussed recent diplomatic efforts on de-escalation and agreed on joint actions for the future. Thanked President @JoeBiden for the ongoing military assistance. Possibilities for financial support to Ukraine were also discussed. pic.twitter.com/pAsQLYAuig

CNN and mainstream media in general have of late seemed intent on hyping and stoking tensions to the point of armed conflict.

The “long phone conversation” with Biden was Zelensky’s second one this month. Again, compare the low key statement of Ukraine’s president himself with what Biden reportedly said to him concerning the “level” of the threat, supposedly with Kiev itself in the crosshairs…

A Russian invasion is now virtually certain once the ground freezes, Biden said to Zelensky, a senior Ukrainian official told @mchancecnn. Kyiv could be “sacked," Russian forces may attempt to occupy it, “prepare for impact”, Biden said, according to this official.

The Ukrainian side appears to have leaked that Biden informed Zelensky that it’s “virtually certain” that Ukraine’s capital could be “sacked” and that Russian forces are looking to occupy it.

Zelensky has been particularly concerned about the US’ rhetoric that war could be “imminent” — a word White House press secretary Jen Psaki used earlier this week to describe the US’ assessment of Russia’s plans — and the recent disclosures of intelligence to US media, the source said, which “is causing panic and economic disaster for Ukraine.”

Zelensky is expected to convey to Biden that he believes the US and its allies have to be more careful with their messaging surrounding the conflict, the source added.

Apparently, Biden was unaware of the talks going on this week in Paris between Germany, France, Russia, and Ukraine

It seems the two leaders were openly at odds over the true level of the threat, with the White House now being accused of grossly inflating the threat. Indeed this has been the messaging of the Ukrainians all week, especially after the US took the dramatic step of telling some of its embassy staff in Kiev to leave the country over the Russian troop build-up near Ukraine.

On this issue, Biden had some explaining to do which likely didn’t make matters any better. Biden “made clear that despite the departure of American family members of embassy personnel, the U.S. Embassy in Kyiv, remains open and fully operational,” according to the US readout.