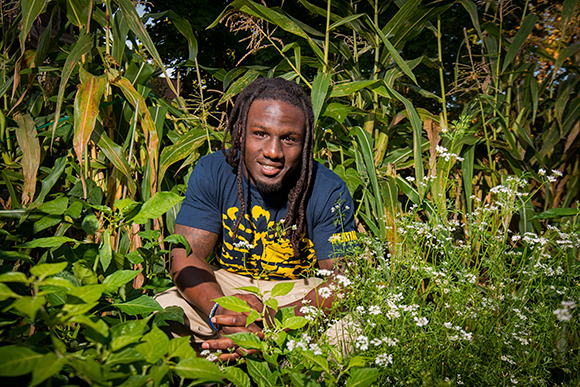 Ann Arborites probably remember Martavious Odoms, Vincent Smith and Denard Robinson for their fast footwork in the Big House. But these days the former football stars are developing their green thumbs.

Odoms created the #EATING Project  in 2012 to establish a community garden in his and Smith’s hometown of Pahokee, Fla., and he and Smith are currently preparing to start a new garden back in southeast Michigan. Odoms says the idea came from “just wanting to get back to people.”

“As I got older I realized that if I could give back my time and effort, it would mean more than just giving back money or stuff like that,” he says.

Smith, who joined Odoms in preparing the Pahokee site last summer, says his rural hometown was an ideal place to establish a community garden.

“It’s a small community where we didn’t really have much,” Smith says. “No Wal-Marts or McDonald’s, nothing healthy where we can go somewhere and have a bite to eat.”

The #EATING team raised almost $40,000 onKickstarter to buy supplies for the Pahokee garden, and selected a plot belonging to Odoms and Smith’s former Little League football coach, now a pastor in Pahokee. Smith says there was a lot of “hand work” involved in cleaning up the plot, and he and Odoms had to brush up a bit on their agricultural skills. But they enlisted the assistance of Miami environmental nonprofit Urban Greenworks, and the Pahokee community was eager to jump on board. Smith says a variety of community members have joined in working the garden this summer and last, from elementary students and high school football players to senior citizens.

“It’s been really picking up, and really been shining a light on the area in Pahokee,” he says. “The garden has really had a major impact and been doing a lot.”

Now that the Pahokee garden is up and running, the #EATING Project is readying a northward expansion. Smith returned to Ann Arbor this summer to begin raising funds and identifying sites for a new garden, or gardens, in southeast Michigan. The project is aiming to raise another $40,000 on Kickstarter by October 7. Detroit, Flint and Ann Arbor are all under consideration for new garden sites.

“Once we got our [Pahokee] garden in, we was like, ‘We’re going to put a garden in every other place we like,'” Odoms says. “I went to school in Michigan, so why not put a garden there? Honestly, the way that my little dream started was because I went to college there.”

Since his return to town, Smith has taken pains to reach out to the local community. He took to Reddit to seek community advice and support last month, and has established a base of operations to sell #EATING T-shirts in the former Le Dog location on Liberty St. Odoms and Smith both seem very pleased with the response they’ve received from Ann Arbor and environs so far.

“The Michigan community and the people, they’re awesome,” says Odoms, who will join Smith in Ann Arbor next month. “They backed us in both of my projects, like 100 percent. They helped us tremendously.”

If Odoms and Smith have their way, gardens in Pahokee and Michigan are just the first seeds to be sown. They’re also currently preparing to establish a site in Deerfield, Fla. in collaboration with former teammate Robinson. And from there, they’re hoping to spread the concept to football players and other interested parties nationwide.

“Football is a big, big thing,” Smith says. “We just want to use our fame and try to do something, give back in our way and do something good with our time.”

Patrick Dunn is an Ann Arbor-based freelance writer and lead writer at Metromode and Concentrate.

All photos by Doug Coombe