Cops Beat Man & 7-Month Pregnant Wife then Deleted the Video, But it Survived on the Cloud [Warning, this one is pretty bad] 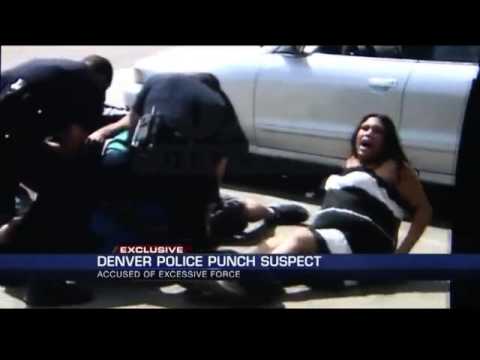 Denver, CO — The Denver police department has been accused of using excessive force after a video, which they allegedly deleted, survived on the cloud and was turned into FOX 31.

The incident started as two officers approached David Nelson Flores, who was in his vehicle with his seven-and-a-half-months pregnant wife and their child, to shake him down after suspecting him of being in possession of a substance deemed illegal by the state.

Upon their approach, officers said they saw Flores put a white sweat sock in his mouth. Because the US is involved in an immoral war on drugs, this ‘sock in mouth’ move apparently gave the officers the right to yank Flores out of his car and proceed to pummel the man on the asphalt.

According to the police report however, a pair of plain clothes officers “assisted” suspect David Nelson Flores out of his car and they all “fell to the ground.”

The pummeling was for Flores’ own good, according to the police report. They bashed in his face and head so he wouldn’t “choke.”

At the moment the officers began struggling with Flores on the ground, Levi Frasier was driving by and pulled over his van to get a better look at the situation. At first, Frasier says, the undercover cops asked for his assistance in subduing Flores.

But Frasier said before he could react, backup arrived and they told him to get back.

That’s when Frasier turned on the camera.

Amazingly enough, as officers were involved in this *life threatening* situation, one of them had the wherewithal to warn his fellow officers about them being filmed. The word “camera!” can be heard shortly after officer Charles “Chris” Jones IV began beating in the face of David Flores.

Flores was struck six times by Jones after he yells, “Spit the drugs out! Spit the drugs out!” Like we said earlier, these six strikes about the face and head of Flores were for Flores’ well being, according to police.

According to police reports, Jones’ reasoning for the punches were twofold:

After seeing her husband’s head bouncing off of the pavement over and over again, Flores’ wife, Mayra Lazos-Guerrero, was scared that he may die, and began begging the police officers in Spanish to stop beating her husband.

Naturally Jones feared for his safety as the seven-and-a-half-months pregnant woman approached the beating zone, so he sweeps 25-year-old Lazos-Guerroro’s legs out from under her. The obviously pregnant woman then falls hard onto her stomach and face, as she begins to scream in agony.

After the police-on-pregnant woman violence subsided, Frasier says that’s when the Denver police officers became interested in his Samsung Tablet.

Fraiser told FOX 31 that officers on scene threatened him with arrest, demanded he turn over all photos and videotape to them and then seized his tablet over his objections.

“When he took it, I said, ‘Hey! You can’t do that. You need a warrant for that!’ and he said, ‘What program did you take the video with? Where is that?’” Frasier said.

He said police ignored his objections and dug through his personal photos without obtaining a court order.

“The first officer that comes up to ask me about my witness statement brings me to the police car and says we could do this the easy way or we could do this the hard way,” Fraser said. “It was taken as ‘You can either cooperate and give us what we want or we’re going to incarcerate you.’”

According to Frasier, when he got back his tablet, the video was gone. “I couldn’t believe it. My heart dropped. I know I just shot that video, like it’s not on there now?” Frasier said.

Frasier said it’s “possible” both he and the police officer who looked through his tablet “missed seeing” the clip inside his files.

However, Frasier said he suspects, in reality, the clip was deleted either with intention or by mistake.

When he got back home that evening, Fraiser synced his tablet with his electronic cloud and within a few moments, the video reappeared.

“It was very well known that the video was shot and things were done on the video that shouldn’t be leaked out, that it would be bad for the reputations of the police officers,” Frasier said.

Denver police Cmdr. Matt Murray, pointed out that Frasier did in fact fill out a witness statement and did not report seeing officers do anything inappropriate. However, filling out a complaint with the ones who are threatening you is like voicing your discontent with a murderous kidnapper who is about to let you go, it’s just something you don’t do.

Frasier actually concurs, and said he did sign the witness statement, but did so “under duress.”

“It was survival mode. It was like, ‘Okay, I’m going to make it out of here. Not going to go to jail today for something I didn’t have anything to do with,’” Frasier said.

Despite his friends telling him to delete the video for fear that the officers would seek revenge, Fraiser did the courageous thing and submitted it to FOX31, and for this Frasier deserves credit.

According to court records, the severely injured Flores was brought to the hospital, treated for his injuries, and now faces a charge of resisting arrest and two felony drug charges.

Mayra Lazos-Guerrero faces charges for obstruction, drugs and child abuse because there was a child in the car when this arrest went down. Guerrero was also allegedly caught with drug paraphernalia in her purse.
Read more at http://thefreethoughtproject.com/cops-beat-man-7-month-pregnant-wife-deleted-video-survived-cloud/#oyzFjZ2F3IpRrYmk.99