Days Into Lockdown for the Unvaccinated, New Infections in Austria Hit Record High

As the debate rages over the effectiveness of lockdowns in combatting the spread of Covid-19, Austria is experiencing its biggest surge to date, hitting a record high number of confirmed infections three days into its government-imposed total ‘quarantine for the unvaccinated’.

Daily infections surpassed 14,000 for the first time since the start of the pandemic. On Wednesday health authorities recorded 14,416 new infections, a fresh record, according to Reuters. 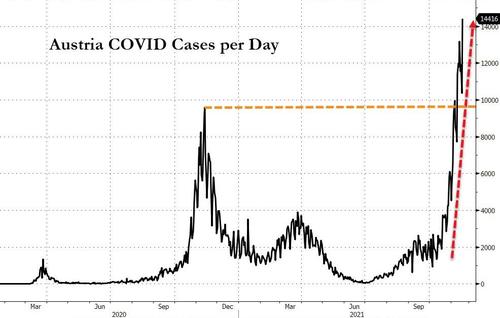 This is compared to the peak from a year ago of just under 10,000 daily infections.

Austria has recently reported that about 65% of its population is now fully vaccinated. At the start of this week the government enacted a ban on any unvaccinated person going outside their home for reasons other than getting food, going to work, or attending health appointments – and even then they are subject to testing.

In recent days images and footage have emerged of police literally patrolling streets and department stores asking random citizens for proof of vaccination. Those under the stay at home order number at least a couple million unvaccinated Austrians.

Reuters details that despite being days in to the draconian lockdown measures, hospitals in many regions are at capacity:

The situation is worst in two of Austria’s nine provinces, Upper Austria and Salzburg, where hospitals are coming under increasing strain. Salzburg has said it is preparing for a triage situation when the number of people needing intensive care beds exceeds supply, though that stage has not yet been reached.

Austrian police demand people show proof of vaccination as they shop in one of Vienna’s busiest shopping streets Mariahilferstraße pic.twitter.com/Rs6Fu4gX6S

It remains to be seen whether the Austrian government’s plan to essentially “punish” the unvaccinated will actually allay the rapidly rising case numbers. As we previously detailed based on disturbing emerging videos of police in action:

Those caught outside without proof of vaccination face fines of up to $1,660.

Last week, Austria’s Chancellor Alexander Schallenberg said the lockdown was designed to make the unvaccinated “suffer” as everyone else had done during earlier lockdowns.

Whether these draconian patrols will continue remains to be seen.

Austrian police hunt for The Unvaccinated, who have been confined to their homes and face fines of $1660 for being in public (except when working).

And the human rights industry, the EU, US and much of the int’l left are silent, if not quietly approving. pic.twitter.com/Wc26Eh09EC

Recall too that Israel was early on among the “most vaxxed nations”, and yet this summer the country experienced a huge surge as the Delta variant spread.

Israel even had ‘Covid green passes’ – or what amounted to a “vaccine passport” to control the movements of the populace, particularly the unvaxxed, which similar to Austria now were barred from restaurants, hotels, and other public venues.