Something strange is going on: now that even Fauci has admitted that COVID-19 could be “downgraded” to an endemic in 2022, as frankly everyone – even Democrat politicians – are sick and tired of coronavirus pandemic, speculation is emerging that the seeds of the next pandemic are already being planted.

There is no specific treatment for people with smallpox, and the only prevention is vaccination.

Here’s a little background from the CDC

Thousands of years ago, variola virus (smallpox virus) emerged and began causing illness and deaths in human populations, with smallpox outbreaks occurring from time to time. Thanks to the success of vaccination, the last natural outbreak of smallpox in the United States occurred in 1949. In 1980, the World Health Assembly declared smallpox eradicated (eliminated), and no cases of naturally occurring smallpox have happened since.

Smallpox research in the United States continues and focuses on the development of vaccines, drugs, and diagnostic tests to protect people against smallpox in the event that it is used as an agent of bioterrorism.

What is odd is that just last night we reported that the FBI and CDC were investigating 15 “questionable vials” labeled “smallpox” that were found in a vaccine research lab near Philadelphia (the same city where 12 Monkeys takes place).

“CDC, its Administration partners, and law enforcement are investigating the matter, and the vials’ contents appear intact. The laboratory worker who discovered the vials was wearing gloves and a face mask. We will provide further details as they are available,” the spokesperson said.

Some, however, did not wait for further details, and on Thursday, SIGA Technologies, maker of the FDA-approved smallpox drug Tpoxx (tecovirimat), rose 6.7% to a three-year high, advancing for a fifth straight day following not just the Philadelphia smallpox news, but also news that U.S. health officials on Tuesday confirmed a case of monkeypox virus infection in a Maryland resident who recently returned from Nigeria. 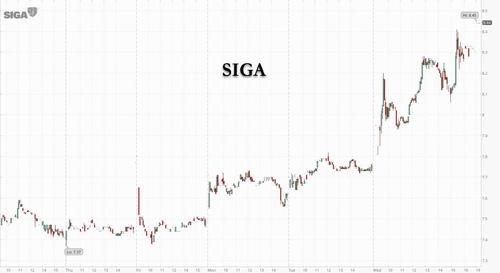 “The individual presented with mild symptoms, is currently recovering in isolation and is not hospitalized. No special precautions are recommended at this time for the general public,” according to the Maryland Department of Health, although judging by the surge in SIGA shares, the market disagrees.

Monkeypox is part of the same family of viruses as smallpox but generally causes a milder infection. Illness typically begins with flu-like symptoms and swelling of the lymph nodes, progressing to a widespread rash on the face and body. Officials ask travelers returning from central or western Africa to notify their health-care provider if they develop symptoms of monkeypox.

More curiously, SIGA earlier this month said that during the fourth quarter, it expected to deliver as much as $113 million of Tpoxx to the U.S. government, which maintains a stockpile. Over the past decade, the U.S. government has procured, or has current orders for, approximately $705 million of TPOXX for national preparedness.

So, unfortunately, be on the lookout for any “incidents” involving smallpox in the coming days.