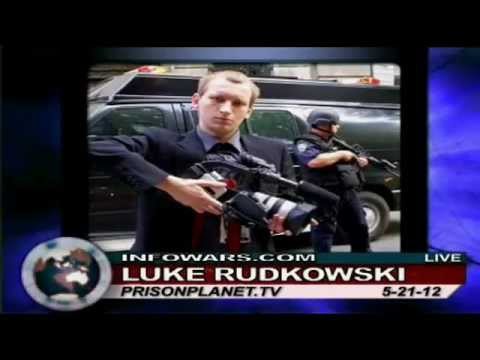 VIA Democracy Now  Watch the video here (WeAreChange at 43:22) Transcript below.

AMY GOODMAN: The Chicago police have also been accused of targeting independent media activists who have been streaming the protests live over the internet. On Saturday night, police detained three livestreamers at gunpoint. Luke Rudkowksi of WeAreChange.org described what happened.

LUKE RUDKOWSKI: A large number of police vehicles, undercover vehicles, CPD vehicles, three white-shirt lieutenants pulled up right in front of us, guns were drawn, screaming at us to get our hands up.

LUKE RUDKOWSKI: I immediately took my hands out, but with a cell phone in one hand. I was recording the whole thing on Ustream, with officers coming up to us with guns pointed. And they were screaming, “It’s just a cell phone. Don’t shoot!” They repeated that about five times. They took my cell phone, threw it on the roof, took us out of the car, put us in handcuffs, asked them some—asked us some questions, took down all of our information, started banging our hard drives, our camera equipment, our batteries. I think one of our hard drives may be destroyed from the banging that the officers did to it. I was talking to one of the lieutenants, and he said, “We’re just looking for a vehicle that’s similar to this.” We drive a ’99 Lexus with New Mexico plates. I don’t think there’s many New Mexico license plates here in Chicago, especially matching that description of that vehicle. And when he said that, he looked down, when I was making eye contact, and started laughing.

MIKE BURKE: But why do you think the police are so threatened by what you do?

LUKE RUDKOWSKI: I have no idea. I mean, what we do is provide a service to the people. We stream live, raw, unedited, for everybody to see and make up their own mind. We’re not—we’re here to document.

AMY GOODMAN: That’s Luke Rudkowski of WeAreChange.org. This is Democracy Now!, democracynow.org, The War and Peace Report. We’re in Chicago. Back in a minute.

VIA The Guardian Read the full article here  BY: Ryan Devereaux in New York

A group of independent journalists who were detained at gunpoint while covering the Nato summit believe they may have been intentionally targeted by police.

At least four journalists – including a Getty photographer – were arrested covering the event, and a number of others suffered injuries while working.

While the overall arrest count following the summit was relatively low and some journalists said authorities were accommodating, the treatment of some members of the media has raised concerns.

Late Saturday night Tim Pool, Luke Rudkowski, Geoff Shively and two friends were driving to an apartment where they had been staying in Chicago. The group had spent the day live streaming and documenting anti-Nato protests.

As they approached a stop sign, roughly a dozen police vehicles – marked and unmarked – reportedly surrounded their car with lights flashing. Using their cellphones Pool and Rudkowski activated their live stream feeds.

“Fuckin’ hands!” one officer is heard yelling, as police approached the vehicle with their guns drawn.

Rudkowski, who was in the back passenger seat, reached his arm outside the window, his phone in hand. It nearly cost him his life.

“They started screaming: ‘Don’t shoot, it’s only a cellphone, don’t shoot!'” Rudkowski said. “I was scared that they easily could have shot me because they saw something in my hands.”

Police bent Shively over the vehicle and handcuffed the remaining four. Officers rifled through the vehicle and reportedly smashed batteries and external hard drives belonging to the journalists. Rudkowksi’s phone was taken from him and much of his footage from the incident was deleted.

According to Shively, a senior officer said their car matched “the exact description of another vehicle” police were looking for. Shively says that when they were initially stopped he heard an officer say: “We found them.”

All five were released without charge. They suspect they may have been targeted. “We thought we were being set up earlier, especially at our place,” Rudkowski said.

That afternoon a woman renting the apartment where the group was staying allegedly informed them that police had gathered outside the residence and were not allowing people to enter. She reportedly advised them not to return.

Pool believes it is possible they were deliberately targeted by police. “They knew who we were. They weren’t pulling over a random car,” he said.

Chicago police did not respond to a request for comment.

Pool and Rudkowski are among the most well-known live stream journalists covering the Occupy movement. Pool’s work has been profiled in Time magazine and number of other publications. Shivley recently returned from a live streaming trip to Syria. Rudkowski – who was granted NATO press credentials – has a history of confronting political figures and executives with his camera. A day before his detention, Rudkowski questioned Chicago police superintendent Garry McCarthy and asked if the department intended to use agent provocateurs in responding to the NATO demonstrations.

Hours before the live streamers were detained, Mike Paczesny, who works with Rudkowski’s media outlet, We Are Change, claims he was held for over seven hours at a Chicago police precinct in connection with a separate incident and was questioned about Rudkowski.

The allegation that journalists were targeted complicates the view that police handled the press at NATO appropriately, a suggestion made by some who were on the ground.

“In comparison to the NYPD, they were much more professional,” said CS Muncy, a photographer with the Village Voice, who has covered Occupy actions in New York City and who photographed the Nato demonstrations. Muncy says the police were accommodating to credentialed members of the press and displayed “deference” to the protesters. “It could’ve been much, much worse.”

Muncy did note that reports suggesting live stream journalists were deliberately targeted were “creepy”. He said: “That’s the more insidious side of things.”

Occupy Wall Street livestreamers Tim Pool, Luke Rudkowski, and Jeoff Shively, along with two other friends, were driving back to their apartment around midnight on Satuirday, after a long day covering the anti-NATO protests in Chicago when they were suddenly surrounded by twelve police cars and told to come out with their hands raised.

“Get your hands up! Hands! Fuckin’ hands!” the officers yelled at them.

VIA THE NATION read the full article here

Much praise has been heaped upon the CPD for their ginger approach toward policing protesters. However, while the CPD might have initially lacked the bash-you-in-the-face forthrightness of the NYPD, that doesn’t mean there isn’t some seriously creepy stuff happening behind the scenes.

To select just one story: In the early hours of Sunday, livestreamers Tim Pool and Luke Rudkowski were pulled over by the CPD, and had their vehicle surrounded by police, who drew their weapons upon the activists.

Later, police said Pool and Rudkowski’s vehicle matched the description of another vehicle they sought.