Demonizing Russia: The Psychology And Consequences Of Neo-McCarthyism 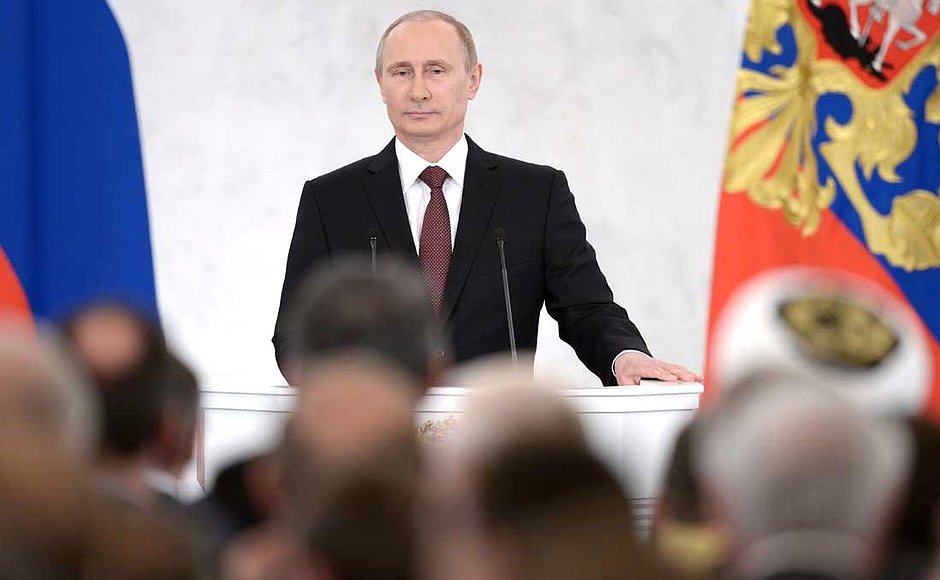 The American public is being conditioned to fear and hate Russia, but why?

This article is not intended to alter your position in regard to Donald Trump in any way. Whether you love him or hate him isn’t an issue of global importance, nor is his political survival relevant to this analysis. Some of the tactics being used in the push to take Trump down however, are.

Before we dive into the quagmire that the topic of of Russia, Trump and the 2016 elections has become, it behoves us to anchor to the stakes: Russia is a nuclear power. The demonization of foreign nations is a precursor to war, and even a limited conflict between the United States and Russia would kill millions (if not billions) of people; rendering much of the planet uninhabitable for decades. Using U.S. Russian relations as a political football in this context is foolish and irresponsible.

Hillary Clinton’s 2016 presidential campaign made tying Trump to Russia a central pillar of their messaging strategy. This line of attack was predicated on comments made by Trump over the years expressing respect for Putin. For example:

“Look at Putin – what he’s doing with Russia – I mean, you know, what’s going on over there. I mean this guy has done – whether you like him or don’t like him – he’s doing a great job in rebuilding the image of Russia and also rebuilding Russia period,”Trump to Larry King on CNN – October 2007

Clinton used these and other statements to weave the narrative that Trump is “Putin’s puppet”. The mainstream media, and left-leaning blogosphere took that narrative and ran with it. Those who didn’t were labeled “fake news”, and attacked as collaborators. The goal was to capitalize on existing anti-Russian sentiment by attaching it to Trump and his supporters (and to pressure those on the fence distance themselves).

This wasn’t just innuendo. Take this headline from Buzzfeed for example: Trump Supporters Love Russia And Think CNN And The New York Times Are “Fake News”. Or this one from TheWeek: Why are Republicans so blindly backing Trump over Russia?

This is an age-old political tactic. Guilt by association and honor by association (aka acquired equivalence) may be logical fallacies, but they are highly effective… most of the time.

Studies have shown that not only does guilt by association transfer negative sentiments from an individual who is disliked to the target in question, but also to anyone associated with them.

The pairing of a target with a (dis)liked person not only affects the evaluation of the previously neutral person but spreads to other individuals who are (pre)associated with the target (spreading attitude effect).

This line of attack got plenty of traction on the neoliberal left, and from the old neocon contingent led by the likes of John Mccain (which have long pushed for a confrontation with Russia) but elicited virtually no response from Trump’s base. Why? Because Trump supporters don’t view Putin as the boogie man the corporate media has worked hard to depict him as. They view him as a conservative, a brilliant strategist, and a strong leader. They don’t see him as perfect, but they consider him to be better than Obama (and by a long shot).

Obviously a lot of “progressives” take issue with that perception, and have found it very frustrating that they were unable to roll over that obstacle as if it wasn’t there. Their response to this, and to other similar failures, has been to declare that we are living in a “Post Truth Era”. That’s a topic in and of itself, but for those who have paid close attention to geopolitical developments over the past eight years, the irony is thick.

When the 2016 election didn’t go as expected people were looking for someone to blame. Of course blaming Hillary for being a terrible candidate (any honest progressive will acknowledge this), or for running a terrible campaign, was out of the question, and of course they couldn’t acknowledge that the backlash over the DNC’s shut down of Bernie Sanders played a role. So of course they blamed Russia.

Now playing loose and fast with the facts for political purposes is a mainstay of American partisanship, but when foreign policy gets thrown into the mix, and “leaders” start accusing a nuclear power of “an act of war” the facts matter.

As of today, many months after the election, no one has put forth any evidence that Russia hacked anything related to the election whatsoever. None. The closest thing anyone has even resembling evidence is the word of CrowdStrike, the company hired by the DNC to investigate their servers, after someone released emails showing that Democratic party officials had been working behind the scenes to discredit and disable the Bernie Sanders campaign.

There are several problems with the CrowdStrike angle however. The first problem, is that the DNC refused to allow the FBI to look at the servers themselves. The FBI instead just took their word for it. The second problem is that CrowdStrike has a SIGNIFICANT conflict of interest in this situation. Google is a major stakeholder in CrowdStrike, and Eric Schmidt the Executive Chairman of Alphabet (the parent company of Google) was working directly on the Clinton campaign effort. He was providing tech assistance, he drew up her campaign plan, and he was even photographed wearing a “staff” badge in an exclusive area during election night.

This doesn’t pass the smell test, at all.

Furthermore, the anti-Russian angle peddled by CrowdStrike was premised on the “fact” that the malware used in the attack was of Russian origin. As any security expert will tell you, once malware is used in the wild, anyone can pick it up and use it (including other state actors).

To bolster their claim, CrowdStrike attempted to draw parallels to a supposed hack on Ukrainian artillery communications that used the same technique. That however, blew up in their face when both the Ukrainian military and the International Institute for Strategic Studies came forward to debunk their assessment.

“We can say, we have said, repeatedly that over the last two months that our source is not the Russian government and it is not a state party,”

The rabbit hole on this topic goes deeper, and clearly there is room for a lively debate, but it takes a willful act of intellectual dishonesty to treat it as a slam dunk case where the villain is clearly defined.

Anyone who has studied crowd psychology knows that one of the most important principles of ideological contagion is repetition. It doesn’t matter if something is true or false. If you repeat something enough times people will start believing it. Once an idea becomes an accepted belief, it takes on characteristics of religious orthodoxy. To question becomes heresy.

The quote below is characteristic of the anti-Russian rhetoric and conspiracy theories that have been parroted endlessly after the election.

But what would be illegitimate, and perhaps even treasonous, is an effort to soften American policy toward Russia’s actions in its near abroad without a clearly stated policy rationale and in return for help from Russian intelligence in defeating a domestic political opponent. “Promise to help us in Ukraine and we’ll help you win against Hillary Clinton by releasing stolen emails that make her look bad”: That and other possible acts of collusion between Russia and the Trump campaign are what the FBI is investigating.Damon Linker – The Week

The trouble with these kinds of accusations, is that once enough people believe them, they have a way of taking on a life of their own. Demands for investigations into Trump’s links to Russia were made, and balls got rolling, but they didn’t find what they were looking for.

The Ukrainian And Syrian Variables

The demonization of Russia didn’t actually begin at the Ukrainian crisis of 2014 or even during the Syrian crisis. There were always a few crazies in the back of the room (like John Mccain and Mitt Romney) pushing the narrative, but no one was listening to them.

However Russia’s successful defiance of the U.S. in Syria and Ukraine triggered the equivalent of a temper tantrum on the part of the U.S. and European ruling elite. Obama in particular got egg in the face several times during these crises, and this created an emotional link for those who were committed to supporting the Obama administration no matter what. Russia had made their leader look bad. Therefore Russia was an enemy. This phenomenon is an expression of the pack instinct. The Alpha must be protected at all costs.

The counterattack became a question of repetition and psychology, rendering the facts irrelevant. Rather than acknowledge that over 95% of the Crimean people voted to reunite with Russia in a referendum that no one has been able to discredit in any meaningful way, or the fact that under international law, the right to self determination is a valid premise for such a reunion, the mainstream media blurred the issue with a simple slur, parroted endlessly: Russian aggression, Russian aggression, Russian aggression.

The short term political utility of tying Trump to Russia has blinded many on the left to the long term effect such a strategy is bound to have. Consider for a moment the implications of an entire generation being raised in the United States right now marinating in news and commentary which frames Russia as enemy number #1 (or #2 depending on where Trump supposedly fits). The facts and specifics won’t matter to these formative minds. It all boils down to sentiment. This sentiment can (and likely will) be used in ways that those fomenting it never imagined.

A recent poll by Reuters found that a stunning 82% of Americans now view Russia as a threat. This is a ticking time bomb.

It is a strategic error to assume anti-Russian propaganda will always work in the favor of the political left. Remember the original Mccarthyism. Neocon Republicans like John Mccain and Mike Pence would like nothing more than a chance to clip Putin’s wings, and in the right context that’s exactly what they would attempt to do. By linking Russia to Trump (arguably one of the most hated political figures in American history) the left is unwittingly laying the psychological groundwork for war.

If and when the moment comes where a Republican president decides to escalate tensions with Moscow (by direct or proxy intervention), “progressives” will find themselves in an extremely uncomfortable dilemma: either they get carried along with their enemies in the wave of anti-Russian sentiment they helped create, or they try to reverse tack and play opposition.

Reversing tack wouldn’t be easy under any circumstances, but it the midst of a crisis it would be all but impossible, and such protests would be easily shot down with snippets of their own words. Hypocrisy is after all, a vulnerability in and of itself.