“Do Not Kill Your Protesters”: Trump Warns Leaders of Iran as Anger Grows 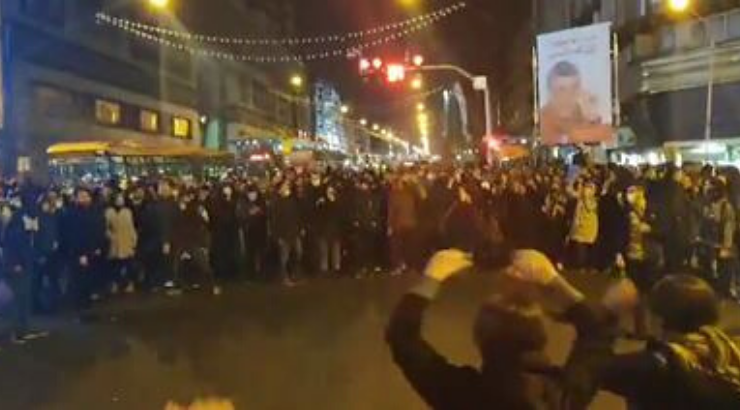 Protests in Iran have spread for a second consecutive day after student-led demonstrations and clashes with police at a Tehran university Saturday saw crowds chanting “death to liars!” and “Khamenei] resign, resign!” They are demanding that Iran’s leaders, including Ayatollah Khamenei step down over their initially concealing the truth about the accidental Ukrainian airline shoot down, which killed all 176 people on board.

The initial hundreds or possibly thousands strong gatherings in Tehran spread to other cities amid a broad heightened security response which the day prior saw authorities briefly detain the British ambassador, reports Reuters; however, the size still pales in comparison to the tens of thousands which took to the streets in November, and more recently the some two million which took to the streets in support of slain IRGC Quds chief Qasem Soleimani during his funeral.

Riot police have been deployed to the University of Tehran campus after fresh protests there, with reports of tear gas and after the previous day opposition social media accounts advanced unconfirmed claims that live fire was being used. On this point, President Trump had an early Sunday message for the Islamic Republic’s leaders and security forces:

To the leaders of Iran – DO NOT KILL YOUR PROTESTERS. Thousands have already been killed or imprisoned by you, and the World is watching. More importantly, the USA is watching. Turn your internet back on and let reporters roam free! Stop the killing of your great Iranian people!

But it also appears that some counter-protests have begun in Tehran, as The Guardian notes that “Pro-regime protesters also gathered outside the UK embassy calling for its closure after the British ambassador to Iran was briefly detained on Saturday evening after leaving the site of a demonstration.”

Upon the very start of the new protests over the airline downing, Trump on Saturday issued a series of tweets in English and Farsi voicing support for what was as that moment a mere hundreds in the streets, crowds which appear to have since grown.

“To the brave, long-suffering people of Iran: I’ve stood with you since the beginning of my Presidency, and my Administration will continue to stand with you,” he tweeted. “There can not be another massacre of peaceful protesters, nor an internet shutdown. The world is watching.”

Given we appear possibly set for a November repeat, which saw hundreds killed at the hands of Iranian security according to most international reports and human rights organizations (though the US claimed at the time the dubious number of up to 1,000), local security forces aren’t taking any chances.

Videos on social media, which couldn’t immediately be verified by Bloomberg, showed motorcycle-mounted security forces in green camouflage and anti-riot body armor stationed on the city’s Valiasr square on Sunday morning. There was also a heavy police presence outside Tehran university.

The US State Department is poised to make much of these initial weekend student protests, though it’s as yet unclear if they will gain in momentum.

The Iranian people continue their protests against the lies, incompetence, and cruelty of the ayatollah’s regime. #IranProtests pic.twitter.com/iF6aJFc0T3

“You can see the Iranian people are standing up and asserting their rights, their aspirations for a better government – a different regime,” he said of the weekend protests, also echoing prior similar statements from Pompeo.

Should the momentum of the protests carry into this coming week, Iran’s leadership will likely brace for the worst given Trump is publicly backing anti-regime demonstrations, and the proverbial gloves of the security forces will be coming off.