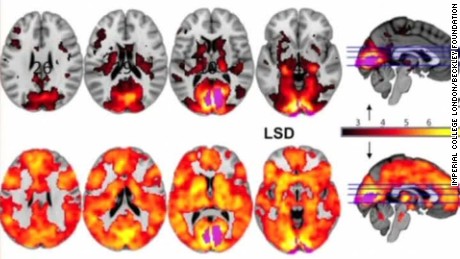 Scientists in London recently showed the brain scan results of people under the influence of LSD.

The results revealed far more positive then negative results in the study’s 20 participants.  The study, headed by Professor David Nutt and Amanda Feilding of the Beckley Foundation, found that LSD and the active ingredient in Magic Mushrooms called psilocybin could help depression, alcoholics and possibly even drug addictions in a way traditional methods of therapy can’t.

However, there is still one problem before treatment can be widespread – both Mushrooms and LSD are categorized as Class A drugs Hallucinogenics by the FDA and are prohibited –  which is ironic, considering its history with the CIA.

Declassified documents released in 2012 show that before LSD was a drug handed out at rock concerts in the 70’s, the CIA dosed hundreds of unwitting Americans under the umbrella of Project MKUltra.
The CIA conducted uncontrolled tests on subjects, including many who did not consent to be lab guinea pigs for the agency.

From beach goers to bars and restaurants, prostitutes and johns – even their own agents were dosed. Then they would follow their test rats around stalking them taking notes. This went on for a decade in secrecy under various operations such as Operation Midnight Climax and two hubs – one in San Francisco the other in New York City. Why would the CIA do this? Remember, this is the same agency that wanted to create lone-wolf killers under “Project Bluebird”.

LSD shortly after all this mess was classified extremely dangerous made illegal and research into its benefits of potential treatment for addictions and alcoholism was shutdown – possibly because LSD, rather than allowing the CIA to create brainwashed killers, gave people spiritual experiences.

LSD users often feel more connected to nature, the world and everything around them – renewed and refreshed with everything feeling beautiful and very vivid — seeing the grass and flowers and trees look different.

Its an experience many choose for a spiritual and psychic re-awakening.

Only now are psychedelics being recognized by scientist as being potentially helpful to mental health after the stigma’s created by the CIA’s botched experiments of bad trips.

Indian tribes have been using psychedelics for years in ceremonies – such as the famous Ayahuasca tea, which is said to make you throw up hours after consumption and have a spiritual life changing journey. Those that seek spiritual enlightenment can now pay to do so safely, at a retreat in Washington for $1,500. Cheaper then a Disney resort vacation!

Ayahuasca translates to the vine of the dead, or soul. Those who take the leap are said to experience confronting their fear of death. With so many people pushing for legalization of Marijuana – also considered to be a psychedelic – are we headed towards a push for legalization of psychedelics for medical purposes?

The more psychedelics are studied and the effects of psychedelics on the human mind are understood, the closer we come to a world where the war on drugs is near an end.