Elon Musk Will No Longer Join Twitter Board of Directors 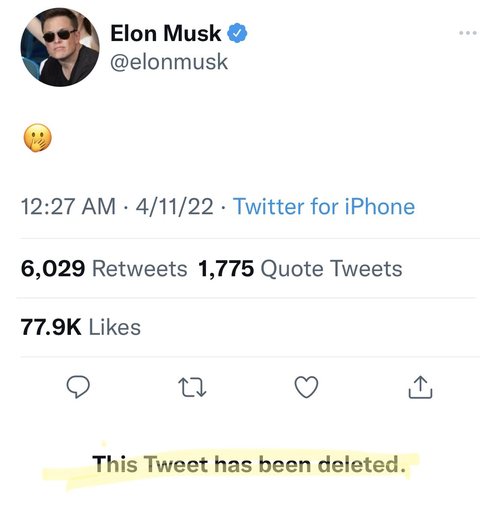 Twitter shares were off around 2.9% pre-market, however the initial drop was quickly bought.

As Bloomberg notes, “The billionaire behind Tesla Inc. and SpaceX has been vocal about changes he’d consider at the social media platform. Musk wasted no time in appealing to users about prospective moves from turning Twitter’s San Francisco headquarters into a homeless shelter and adding an edit button for tweets, to granting automatic verification marks to premium users. Those open musings drew in even Amazon.com Inc. founder and space-faring rival Jeff Bezos, among other high-profile personalities.”

Musk and Twitter Execs had planned a town-hall for employees this week, however it’s unclear if that will now happen.

Following Elon Musk’s recent acquisition of 9.2% of Twitter and last Tuesday’s formal announcement that he would be joining the Board of Directors, Musk has declined the board seat.

“Elon Musk has decided not to join our board,” wrote CEO Parag Agrawal, adding “We were excited to collaborate and clear about the risks. We also believed that having Elon as a fiduciary of the company where he, like all board members, has to act in the best interests of the company and all our shareholders, was the best path forward.”

“Elon’s appointment to the board was to become officially effective 4/9, but Elon shared that same morning that he will no longer be joining the board. I believe this is for the best. We have and will always value input from our shareholders whether they are on our Board or not.”

Elon has decided not to join our board. I sent a brief note to the company, sharing with you all here. pic.twitter.com/lfrXACavvk

Word of Musk’s appointment to the board sent liberals into fits – as the inclusion of the free-speech advocate was seen as a threat to left-wing heterodoxy that underpins Twitter’s culture.

Of course, for those paying attention, this means that Musk can now own more than 14.9% of the company – a limit that board members must adhere to.

As the Wall Street Journal notes, “It was unclear why Musk refused the board seat. Adding Musk would have restricted how big a stake in the company he could own. Musk could now do anything from selling his stake to potentially pursuing a hostile takeover of the company.”

We await the next Musk tweet with bated breath…