EXCLUSIVE: My Interview with the Las Vegas Shooters 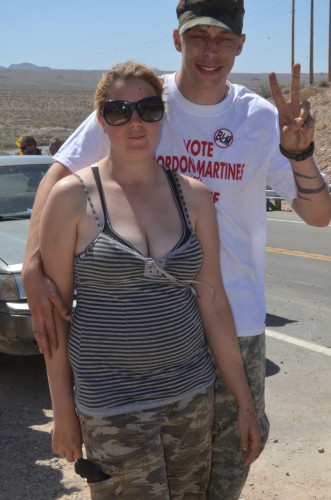 Arriving at the Bundy Ranch standoff on April 12, I had no idea I would end up interviewing the Las Vegas shooters responsible for the deaths of 5 people, including 2 Las Vegas police officers. As I approached the vicinity, I witnessed a convoy of over a hundred law enforcement vehicles heading south on the I-15, away from the ranch. Unmarked SUVs and other vehicles bearing the seals of the BLM, Rangers, or various police departments retreated back into the desert.

Unarmed, wearing shorts and a t-shirt, I painfully stuck out like a sore thumb.

Almost everyone there in support of Cliven Bundy wore desert camouflage pants, an assault rifle, and at least one sidearm. Hesitant at first, some of them eventually agreed to speak with me on tape.

Cliven Bundy suddenly appeared on a makeshift stage thanking those present for their support and fervent dedication. Bundy asked everyone to reconvene for mass the following morning at 10am. As he stepped off the stage, I had a chance to interview Cliven.

Bundy spoke about witnessing the Watts Riots in 1965. While describing the chaos, he made some slightly racist comments. Uncomfortable with portraying Cliven Bundy as a possible racist, my photographer refused to release the footage. Less than 2 weeks later, the NY Times released Bundy’s “Negro” rant.

The next day I returned to the Bundy Ranch as the standoff continued. While interviewing state representatives, Oathkeepers, and members of Anonymous both on and off the record, I met the future Las Vegas shooters, Jerad and Amanda Miller. 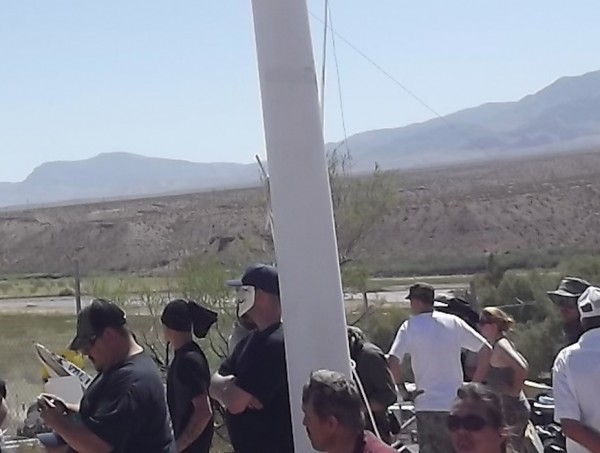 The Millers agreed to speak with me off the record due to the fact that Jerad was violating his parole by carrying a sidearm in public. Amanda was also armed, but quite friendly while discussing draconian marijuana laws, militarization of the police, the growing surveillance state, excessive police brutality, and government corruption.

Jerad told me that he had been arrested for selling marijuana to “help old people with arthritis.” The handgun holstered on his right hip was apparently registered to him and legal for him to own, but not to carry in public. Surrounded by hundreds of federal agents, Rangers, and multiple police departments, the Millers saw themselves as foot soldiers locked in a war against their own government.

Refusing to be recorded, Jerad and Amanda Miller however did agree to pose for a picture on the condition that Amanda stood in front of Jerad’s holstered gun. Wearing a t-shirt supporting Gordon Martines for Sheriff with an anti-BLM button and camouflage pants, Jerad flashed a peace sign as Amanda used her body to conceal his firearm. The grip of Amanda’s pistol visibly protruded from her front pocket.

Although blatantly breaking the law, they did not stand out as spree killers. Jerad seemed a little hyperactive and often rushed into anti-government rhetoric against the New World Order, while Amanda appeared polite yet equally passionate.

The Millers never made any racist comments to me, but the absence of any minorities at the Bundy Ranch seemed to speak for itself. Surrounded by counter-snipers and heavily armed militiamen, the Millers were willing to sacrifice their lives in the defense of Cliven Bundy. Law enforcement had become the enemy, and Jerad and Amanda Miller were willing to murder for their beliefs. 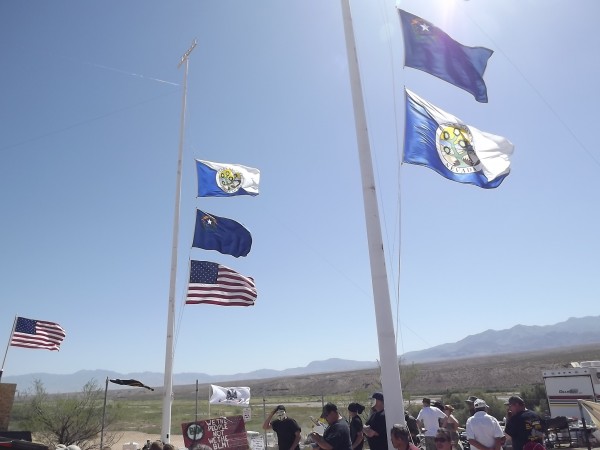