A now viral investigative report based on a newly released FBI document authored by no less than the Chemical and Biological Intelligence Unit of the FBI’s Weapons of Mass Destruction Directorate (WMDD) finds that a Chinese scientist was caught under extremely suspicious circumstances transporting vials believed to contain the deadly MERS and SARS viruses into the United States.

“In late November 2018, just over a year before the first coronavirus case was identified in Wuhan, China, U.S. Customs and Border Protection agents at Detroit Metro Airport stopped a Chinese biologist with three vials labeled ‘Antibodies’ in his luggage,” the lengthy report by Yahoo News begins.

The unnamed scientist claimed he was asked to deliver the vials to a US institute, though the FBI report also fails to identify the recipient. “But the FBI concluded that the incident, and two other cases cited in the report, were part of an alarming pattern,” Yahoo News reports.

“The Weapons of Mass Destruction Directorate assesses foreign scientific researchers who transport undeclared and undocumented biological materials into the United States in their personal carry-on and/or checked luggage almost certainly present a US biosecurity risk,” the FBI report states.

“The WMDD makes this assessment with high confidence based on liaison reporting with direct access,” the FBI report adds.

The report cites US military experts who speculate it could be part of a broader Chinese program aimed at stealing US state secrets and research, and further that such foreign nationals caught with the materials might be unwitting mules, but regardless the case is part of an “alarming pattern”.

Other additional and more recent instances detailed in the report, such as in September 2019, detailed a separate case of a Chinese national’s attempt to sneak vials of H1N1 influenza samples into Dallas.

Needless to say, as we reviewed precisely in past reporting related to the Wuhan Institute of Virology and its ‘coincidental’ proximity to the market where COVID-19 is claimed to have first emerged, the potential for deadly pathogens to ‘escape’ through mishandling during such haphazard airport trips by individuals trying to sneak vials across borders is high. 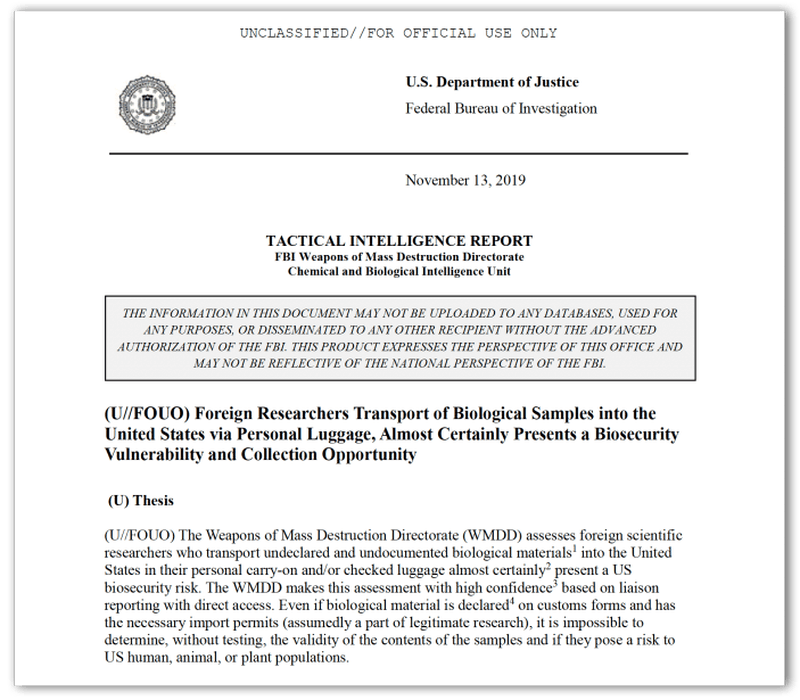 And this is where the Yahoo News report pivots to the subject and main questions of our own reporting of two months ago, which readers may remember, was deeply triggering for Buzzfeed and others who set themselves up as gatekeepers policing and ensuring acceptance of only what they narrowly deem ‘acceptable’ analysis and questions: “the FBI appears to be concerned with dual-use research that would be used for bioterrorism,” the report emphasizes. 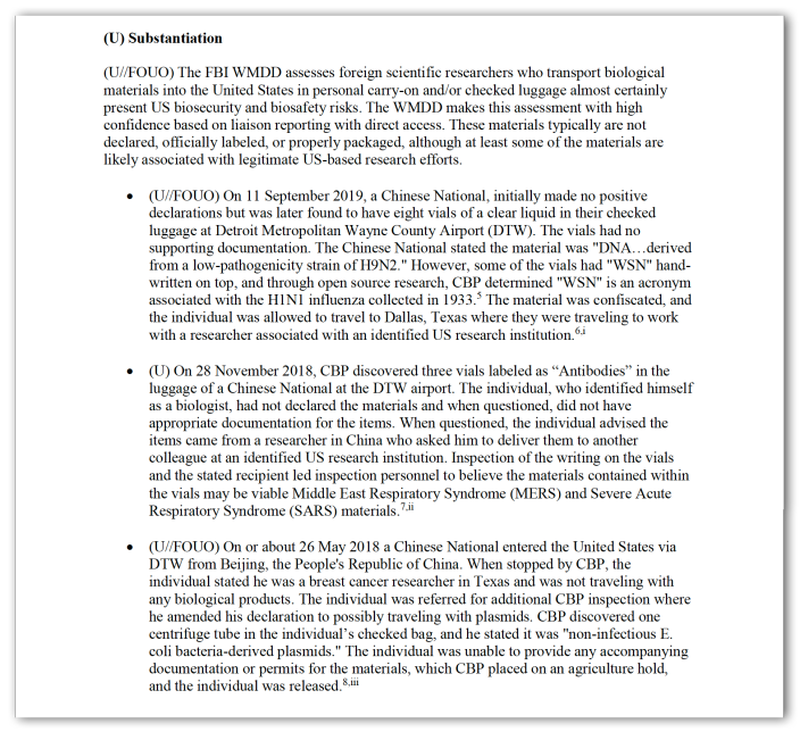 Digging deeper into what we were all told is supposed to be a mere deranged conspiracy theory the Yahoo News authors then make the direct connection between COVID-19 and the aforementioned potential for bioterrorism:

The report, which came out more than two months before the World Health Organization learned of a cluster of pneumonia cases in Wuhan that turned out to be COVID-19, appears to be part of a larger FBI concern about China’s involvement with scientific research in the U.S. While the report refers broadly to foreign researchers, all three cases cited involve Chinese nationals.

And just to underscore further potentially what we’re dealing with in terms of likely threats, the FBI itself said it approached and investigated the Detroit MERS/SARS airport case and others ultimately out of biosecurity and bioterrorism concerns.

“The FBI report refers to both biosecurity, which typically refers to the intentional misuse of pathogens, such as for bioterrorism, and biosafety, which covers accidental release. The FBI declined to comment on the report,” it continues.

So it now appears the FBI itself has long been closely following Chinese military bioweapons research as well as dangerous pathogens’ mishandling and ‘misuse’ in relation to unique deadly respiratory viruses, and asking the relevant and obvious questions.

Glad to know we’re not alone.