Not long after we pointed out a report from the Daily Beast which traced the tensions in the marriage of Bill and Melinda Gates to Bill’s relationship with convicted pedophile Jeffrey Epstein, the Wall Street Journal has followed up with more reporting that confirms that Melinda Gates started consulting divorce attorneys as far back as 2019, before the pandemic thrust her husband back into the global spotlight as the world’s de facto vaccine czar.

Documents obtained by WSJ show the couple negotiated their divorce throughout the pandemic.

Ms. Gates consulted with divorce lawyers roughly two years before she filed for divorce from Mr. Gates, saying their marriage was “irretrievably broken,” according to people familiar with the matter and documents reviewed by The Wall Street Journal.

As the Daily Beast also reported, tensions in their marriage can be traced back to a New York Times report claiming that Gates had met with Epstein several times, and that he had once stayed late into the night at Epstein’s Manhattan townhouse. Their meetings, according to Gates’ people, reportedly focused on issues of philanthropy. The pair first announced their split a week ago, and since then, the world has been waiting to learn more about how they plan to split their $130 billion-plus fortune.

But what’s almost more notable than the details report by WSJ and the Daily Beast, is the fact that the MSM seems to be jumping on the story that Bill Gates’ relationship with Jeffrey Epstein directly led to the dissolution of his marriage.

Pretty interesting that EVERY major outlet is covering this story. https://t.co/w64Ew0dFtE

This is a big deal because, as we reported more than a year ago, Bill Gates and the Gates Foundation have built up one of the world’s most formidable media-manipulation machines to help silence Gates’s growing chorus of critics.

Here’s a snippet from a Columbia Journalism Review story on how Gates manipulates the press:

Gatess generosity appears to have helped foster an increasingly friendly media environment for the worlds most visible charity. Twenty years ago, journalists scrutinized Bill Gatess initial foray into philanthropy as a vehicle to enrich his software company, or a PR exercise to salvage his battered reputation following Microsofts bruising antitrust battle with the Department of Justice. Today, the foundation is most often the subject of soft profiles and glowing editorials describing its good works.

During the pandemic, news outlets have widely looked to Bill Gates as a public health expert on covideven though Gates has no medical training and is not a public official. PolitiFact and USA Today (run by the Poynter Institute and Gannett, respectivelyboth of which have received funds from the Gates Foundation) have even used their fact-checking platforms to defend Gates from false conspiracy theories and misinformation, like the idea that the foundation has financial investments in companies developing covid vaccines and therapies. In fact, the foundations website and most recent tax forms clearly show investments in such companies, including Gilead and CureVac.

In the same way that the news media has given Gates an outsize voice in the pandemic, the foundation has long used its charitable giving to shape the public discourse on everything from global health to education to agriculturea level of influence that has landed Bill Gates on Forbess list of the most powerful people in the world. The Gates Foundation can point to important charitable accomplishments over the past two decadeslike helping drive down polio and putting new funds into fighting malariabut even these efforts have drawn expert detractors who say that Gates may actually be introducing harm, or distracting us from more important, lifesaving public health projects.

As we have reported, Gates’ ties to Epstein are much deeper than a simple prearranged meeting or two on the subject of philanthropy. The Daily Mail once reported that Gates was a guest aboard Epstein’s plane.

When confronted about this, a representative for Gates said he wasn’t aware the plane belonged to Epstein! 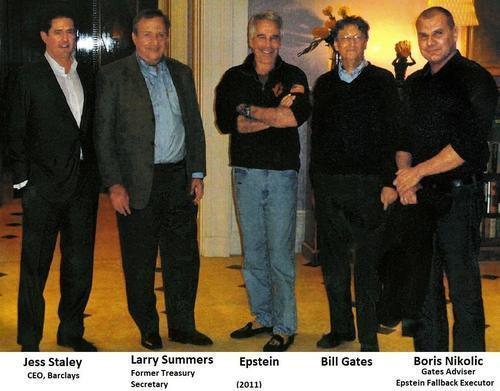 Meanwhile, employees of the Gates foundation also visited Epstein’s mansion on multiple occasions, while Epstein also “spoke with the Bill and Melinda Gates Foundation and JPMorgan Chase about a proposed multibillion-dollar charitable fund — an arrangement that had the potential to generate enormous fees for Mr. Epstein,” according to the Times.

Two of Gates’ closest advisors developed close relationships with Epstein, and later introduced him to Gates.

Gates once said in an email that he found Epstein’s “lifestyle” to be “intriguing”, though he immediately noted that it wouldn’t suit him.

With all this preamble once again coming out in the press, we can’t help but wonder: is a Bill Gates accuser about to step forward?